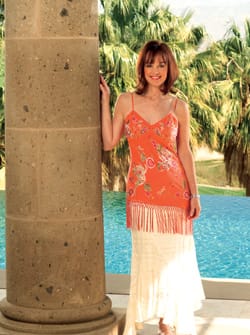 You recently completed your autobiography. What was the best and worst thing about looking back?

We all have our dark nights of the soul, but it is my contention that it is just those times when growth and understanding of life occurs. In fact, I kind of feel like I am in one now, though it is of a more subtle nature.

The greatest joy of my life has been raising my son Nickolas.

Do you think fans will pick up your book when it’s published for the Dynasty dish, but keep reading for the life lessons?

That is my hope, and there is more to come.

The excerpt from your book in the June issue of Palm Springs Life (Playing the Field) was all about gaining your competitive edge in polo, but now your big passion is tennis. What makes a nice girl from Connecticut so competitive?

I like games, but I do not consider myself a particularly competitive person except in the moment of a game. I think that competition in life is a very American trait and has a huge dark side. In regards to polo, at that time I think I was still working out the issue of “a woman in a man’s world is just as valuable” which was sort of ridiculous when it came to polo because that was definitely not the case. I have an egalitarian side, and I enjoyed crushing arrogance in a metaphorical sense. Look, I was partially insane.

You’ve been an actress, a director and now a writer. Do you prefer one or do you think they all feed your creative spirit?

Yes, they all feed my creative spirit, and when it is not dining, I’m a bit off, which is a good hunk of my existence quite frankly. The artistic spirit has a dark side, too.

Do you think George Bush and Saddam Hussein could’ve benefited from a good Dynasty catfight in a lily pond?

George Bush and Saddam are both equally out of my realm of comprehension. Plus, I don’t think they could carry off the gowns.