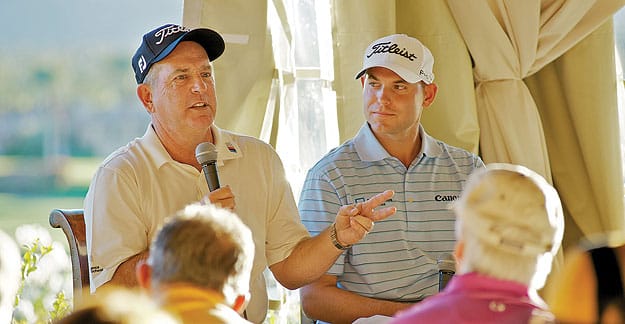 Bill Haas, winner of the 2010 Bob Hope Classic golf tournament, recalls competing in a 2004 tournament when he approached Tiger Woods. Just 22, a nervous Haas broke the ice with a reference to his father, professional golfer Jay Haas.

“Are you looking forward to the Ryder Cup? I know my dad is,” he said.

Woods looked him straight in the eye and replied, “I could give a s###. I am just trying to beat your ass right now.”

The father and son pro golfers (Jay Haas won the 2011 FedExCup) reside in Greenville, S.C., but were offered memberships at Toscana so they have a “home” course on which to practice when they compete out West.

“It makes us feel that much more comfortable,” says Bill, who adds that level of comfort may have helped him win the 2010 Bob Hope Classic tournament and come in second in 2011.

He also revealed that “maybe in the future” he and his wife would move to the desert.

In February, Toscana brought another celebrity in to meet its members with a trunk show of the fall 2012 collection of Gordana Gehlhausen. A competitor on Project Runway All Stars, Gehlhausen was in the Coachella Valley to show her designs on the runway at Fashion Week El Paseo.