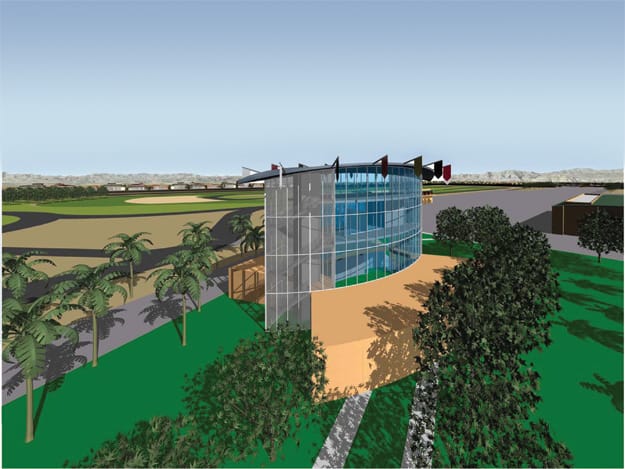 Tortoise-slow golf carts need to make friends with lightning-quick race cars. The latter could soon join the former as an icon-on-wheels for the Coachella Valley region. A $75 million project in Thermal would turn 300-plus acres into a luxury-lifestyle venue for those with a penchant for speed — and garages housing Bugattis, Ferraris, and other high-performance rides.

“[Principal Paul Clayton] was talking with somebody about cars who said, ‘If you want a great idea, find a place where I can drive my car,’” recalls Blake Miraglia, the other principal behind the project.

That “place” lies just south of Jacqueline Cochran Regional Airport. Since neither Clayton nor Miraglia has a racing background, they brought in Alan Wilson, an expert on track design and safety; Tom Gloy, a former Indy racer; and Darren Law, a current racer in the GRAND-AM and Porsche Racing series.

“Our goal was to make the track fun for everyone to drive — even for someone like me who has never raced,” Miraglia says.

Through Thermal Motorsports’ strategic partnership with PGA West and La Quinta Resort & Club, members will enjoy benefits such as PGA West premier sports membership and discounts at the hotel. Buyers of the 200 trackside and 54 off-track lots (7,500-15,000 square feet) will be able to design their own garage or have a turnkey project built with a custom kitchen, entertainment lounge, and patio.

Architect Guy Dreier, known for creating distinctive multimillion-dollar residences, is designing the 10,000-square-foot clubhouse and timing tower that will include a café, instructional rooms, and club room overlooking the track.

Phase One (with an anticipated opening in November) includes two of the three planned tracks, as well as a kart track that will be open to the public. Clayton and Miraglia are in discussions to bring an established racing school to the club as well.

One track will be reserved solely for members (58 reservations had been taken by mid-March); the second track may be rented out to car companies wanting a private place to shoot photos or film new models, as well as movie and commercial filming. Car clubs, including Aston Martin and Ferrari, are already scouting the location for future gatherings/events.

“The best thing we have here is location and weather,” Miraglia says. Location includes not only being in a resort area, but also being in federal empowerment and state enterprise zones.

“We expect a lot of commercial business to be generated by the track,” Miraglia says. “And being next to the airport was huge.” The airport doesn’t care about the noise that comes with high-performance cars at velocity, and its vicinity offers ease of access to Fortune 500, celebrity, and other members of the haut monde.

With the recently opened Chuckwalla Valley Raceway in Desert Center, Thermal Motorsports Track and Club stands to make the Coachella Valley a place where “driving” means more than swinging a golf club.