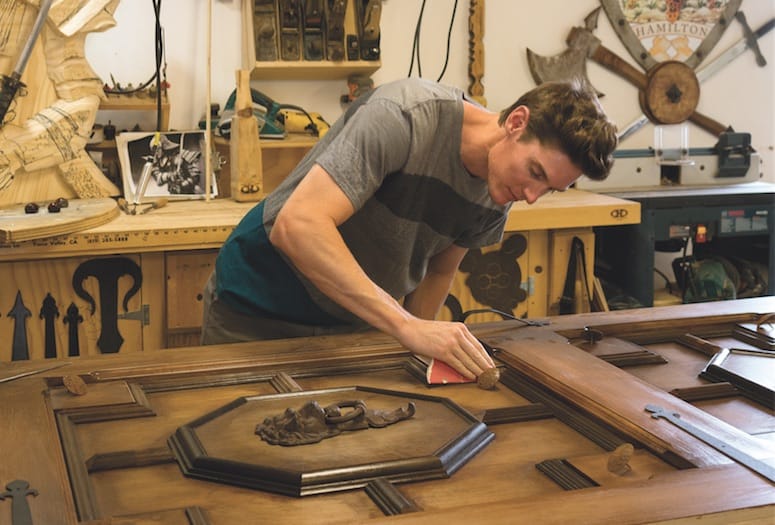 It’s a breezy afternoon in the high desert, sun pitched overhead. Cory Hamilton leans against the workbench centered in his garage. He’s tall and lanky, all smile and jawline. A boyish 34-year-old who never left the small town he calls home. He never wanted to. Inside, his wife of eight years, Janet, works on the laptop. Their little ones, Logan, 2, and Bailey, 4, curl snugly in their beds. It’s nap time.

A gentle electronic beat hums through Hamilton’s garage workspace in Yucca Valley. He calls it the “Wood Lab.” It’s filled with his custom-crafted furniture, elaborate assemblies created with surgical precision, seemingly ripped from the Gothic era. The foreboding furnishings float among a sea of artwork — intricately carved statues and acrylic portraits whose piercing eyes stare bleakly across the wood-dusted floor.

Hamilton’s cheer seems out of place here. The severity of his pieces makes you wonder how so much darkness could possibly ooze from such a jovial guy.

“Ideas just keep flooding my head,” he says, as if he can’t wrap his mind around it either. Perhaps he was born with the talent, he says. A gift. “Divine inspiration.”

He’s a churchgoing man, a member of the same congregation since he was 6 years old. He and Janet shared their first matrimonial kiss under the watch of his pastor, who married them in 2008, two years after Hamilton proposed atop San Jacinto Peak.

The timber maestro doesn’t design with ominous intent. But his artistry isn’t for the faint of heart. “I think a lot of my influence sculpting some of those darker things comes from images that are just ingrained in my brain from when I was little,” he says. Comic books. Spawn. The Hulk, whose hulked-out likeness adds a splash of green to the Wood Lab walls.

Behind Hamilton, a deer bust looms by the door, so lifelike it begs to be touched. It’s rendered from reclaimed wood, painstakingly etched and hand-painted, with found manzanita antlers. It’s a play on perspective, with a nod to Jekyll and Hyde. 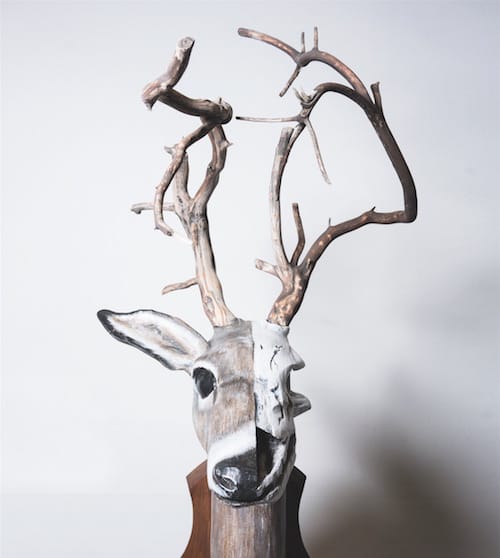 The beast wears two faces, a center line dividing light from dark, life from death. One side is tender, fur-covered, gentle. The other is naked skull, cracked, with a black-eyed grimace.

Hamilton’s furniture — wine cabinetry, storage tables, and a medieval throne are just a few examples — looks like well-kept relics. When he displayed at the Indian Wells Arts Festival last year, at which he took home the blue ribbon for utilitarian furniture, connoisseurs assumed Hamilton was refinishing antiques. In fact, each piece is designed, built, and hand-finished from scratch in two to four weeks.

His infatuation with design dawned at, of all places, the Westfield Palm Desert mall. He was 21. He was a part-time construction worker cruising the complex with his girl when they ducked into an overpriced prepster boutique. He wasn’t struck by the fine knit apparel, but by the ornate wooden shelving unit that displayed it. He had to have it. 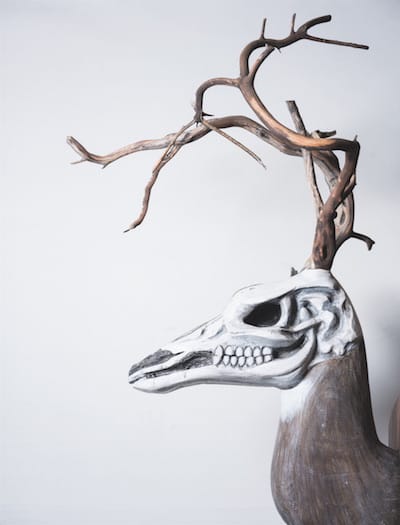 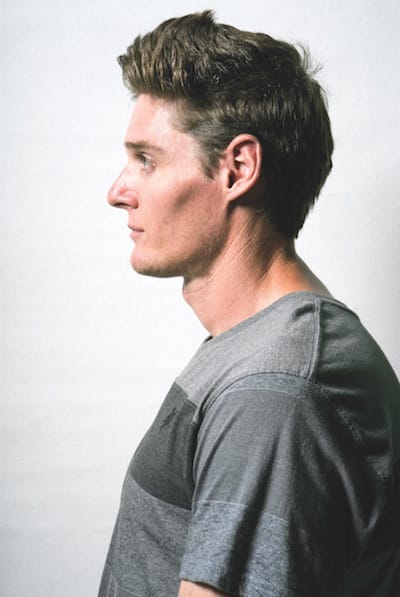 Cory Hamilton’s deer bust exemplifies the duality in his art; one half is polished, the other weathered.

Aside from the woodworking technique picked up from his contractor father and a few high school art classes taught by his uncle, Hamilton never had any formal training in either furniture manufacturing or fine art. He’s an experimenter who relishes the ability to shape wood. He gets off on creation. And precision.

In February, Hamilton won the People’s Choice Award at the Palm Springs Annual Juried Art Show for the “Man-Droid,” a stonelike human-robot figure with haunting cerulean eyes and tentacles of corrugated tubing spewing from its brainpan. It’s the kind of thing that lingers in your dreams. Or nightmares.
Not all of Hamilton’s sculpture is so scary.

A colossal smiling crescent moon named Moon Man hangs out by the kids’ play area in the yard. Nearby, a pair of giant technicolor jellyfish gingerly interlock their feelers. They’re art installations Hamilton created for the Joshua Tree Music Festival, where he’s a regular contributor.

“The energy of people digging your work, it’s really incredible,” he says. “I finish a piece, and I’m already started on the next one. … Creating is my drug.”

His work can also be seen at Venus de Fido, a new health and wellness center for pets and people in Palm Desert. He designed the tufted lobby desk, a grand entrance upheld by a pair of gilded canines. He also helped to carve the spa’s salt cave. 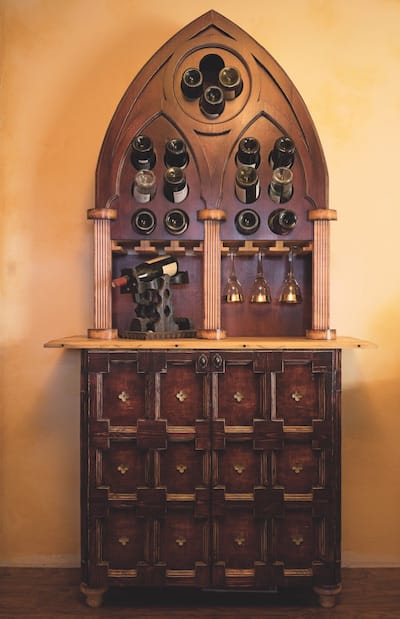 As the sun begins to melt into the Joshua tree-studded horizon and the children stir in their beds, he steps away from his workbench and scans the garage. Hamilton’s planning a redesign in time for the tour, and that means all the artwork has to come down. He’ll faux-finish the walls and build dividers to create a gallery display space. But now, it’s dinnertime. 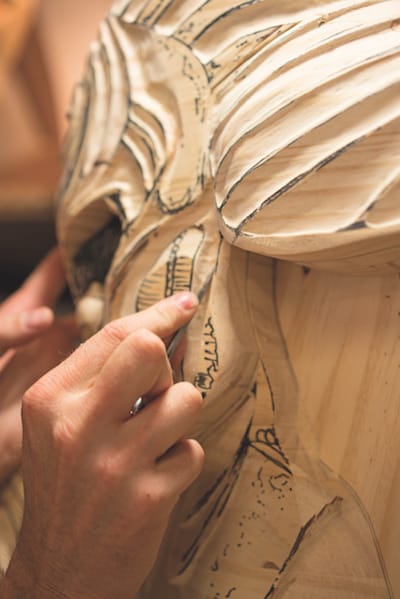 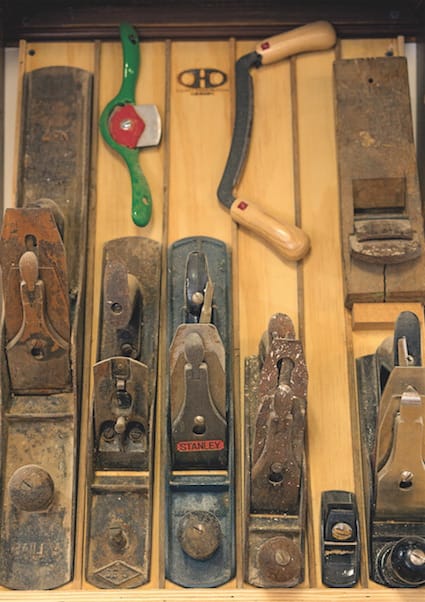 He says tools needn’t be expensive to produce great work.