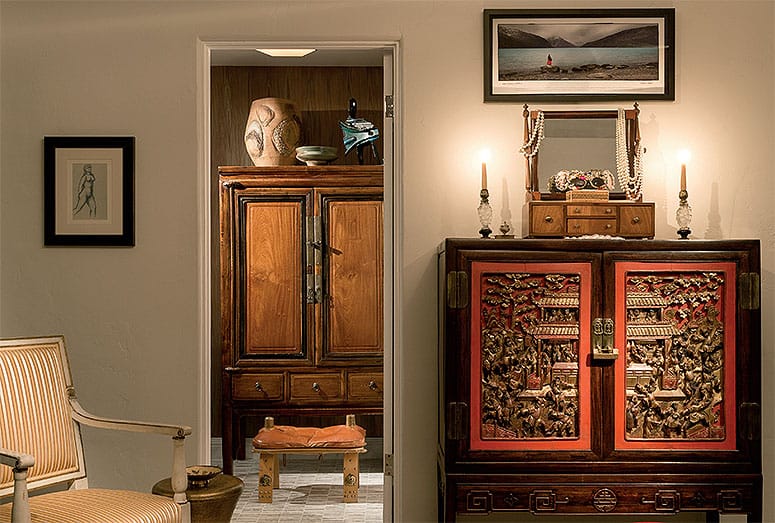 Peace takes its soft hold just past the gate of Roswitha Kima Smale’s beautiful 1930s Spanish estate. Birds flit between two white structures with red tile roofs that beckon on either side of the drive, while the mountain behind this Old Las Palmas gem looms over it like a gentle giant, keeping watch.

"It doesn’t get any better than this," Smale says, as in awe of the property today as the day she purchased it a year ago — if not more so. "I love being this close to the mountain. I can feel its power and its energy."

That energy surges through the new life Smale has carved out for herself after making the move from Rancho Mirage’s Mission Hills to Palm Springs. Since day one she has enjoyed the proximity to shops, restaurants, new friends, and community, as well as nature itself.

Smale made an astute decision in purchasing the residence move-in ready. Having been nearly fully restored by its previous owners, the property only required a light touch to finesse it into a tranquil sanctuary. For that, Smale was equally savvy. After she met designer Sam Cardella through mutual friend J.R. Roberts of the Palm Springs Art Museum, the two decided to put their good taste together and go shopping. "Sam was brilliant at finding just the right pieces. Amazingly so, and at good prices, I might add," she says with a smile. The pair browsed strategically yet with whimsy, from the Modernism Week furniture show to local shops across the valley. Cardella says many accessories, unusual art pieces, and sculptures came from the Palm Canyon Galleria, Christopher Anthony Ltd., Stewart Galleries, Dwight Polen, and Flow Modern. In L.A., they shopped a few select favorite haunts, including JF Chen and Adesso, as well as Rewire for lighting.

"We just started collecting what she loved," Cardella says. "It was a two-person journey for both of us." One that Smale says opened her eyes and broadened her horizons regarding the objects and furnishings she wants to surround her at home.

But that journey began long before the shopping. Smale’s move from her former 5,000-square-foot golf course home symbolized a fresh start. Having been married for over 40 years, she took care of her husband for the final 15 and her mother for five years before losing them both to their battles with Alzheimer’s. It was then she decided to downsize into her intimate 1930s haven. "I wanted something small and cozy, old and charming," this avid proponent of preservation explains. "An older house has a soul. This one spoke to me when I walked in." For the transition, however, she retained almost nothing. "My furniture wasn’t extraordinary, and it wasn’t even the right scale," she adds. So Smale packed light, as if setting out on an adventure — her suitcases left open for new experiences, waiting to be filled with new souvenirs, new meaning.

Her challenge then resided in giving the empty, five-bedroom house a feeling of home. "I knew I couldn’t do it by myself; I didn’t even want to at this point in my life," she recalls. "It takes a lot of time and patience."

That’s where Cardella stepped in, turning the vintage nooks and crannies Smale adored into a yoga room, an artful display in a kitchen alcove, and an enveloping TV room with a curved ceiling that he skillfully wallpapered to blend into the walls. Such intimate spaces tell the tale of their times, before homes began to sprawl. These snug rooms unfurl modestly, yet with purpose and possibility.

"I knew what I wanted from a feeling perspective," Smale says. "Sam helped it grow and evolve. Sometimes other people see you better than you see yourself. And he’s very good at that."

"We had a lot of fun," Cardella affirms, adding that the first impression in any home should convey the spirit of the homeowner, not the designer. In Smale’s dining room, a set of eight chairs from the local Porter & Punk showroom joins a family heirloom painting from her Estonia homeland. In the entry, a vintage lamp floats over an eight-sided bone and mother-of-pearl inlaid Moroccan table from Santa Barbara. When it comes to finds from consignment stores, "it just depends on how lucky you are," Cardella confides.

"Well, this is Mr. Lucky," Smale adds with a laugh. "He seems to walk in just as they’re unloading a truck and simply says, ‘We’ll take this and this and this!’" In a cozy corner of the master bedroom, Cardella incorporated one of Smale’s favorite midcentury pieces: a red Saarinen Womb Chair by Knoll. The master bath’s centerpiece is a French bateau cast iron soaking tub, open to the master bedroom. African figures and a Moroccan rug play into the global scheme. The wallcovering is by Robert Crowder.

The result throughout the once-bare home evokes the sense of a lifetime spent curating and collecting. Cardella’s sensitivity to his client’s wishes and a series of skillful shopping trips worked wonders. The pair met in mid-November and by the first week of April were taking a step back in admiration of their efforts, a progression Smale calls "a feat and an accomplishment."

"I’ve had encounters with designers in the past, but they haven’t always worked out," Smale says. "This is not the designer look; Sam doesn’t do just one look. It’s very individual. My friends love it and they all say the same thing: ‘It’s so you!’ Sam nailed it."

In the master bedroom, a former closet stripped of its doors makes a sweet alcove for a deep cast-iron soaking tub. The tub’s rustic, steel-painted lacquer is rubbed to a shine like an ancient coin. Smale says she drew inspiration from her neighbor in the south of France who also enjoys soaking in a boudoir bathtub. Among these romantic details, Cardella worked in several of Smale’s existing pieces that bring a nod to midcentury design, including a red Knoll Womb Chair in the master bedroom and a Knoll table in the office.

Outdoors, the ambling flow from one house to the other includes surprises around every corner, from a very private outdoor shower and a rooftop patio to several secluded patios for entertaining.

During the home’s final bit of restoration, Smale camped out in the guesthouse with minimal furnishings while Cardella remodeled the master bedroom and bathrooms. While further construction was underway, Smale fled for a sojourn to Morocco. When she returned, Cardella’s work was complete.

Soon after, Smale hosted her first major gathering in the place: an anticipated fundraiser for the Cheetah Conservation Fund, with a gorgeous live cheetah as guest of honor. During such events that benefit the organizations Smale supports, her guesthouse kitchen doubles as a catering kitchen. "I wanted something small and cozy, old and charming. An older house has a soul. This one spoke to me when I walked in."

Smale now lives a celebratory life. She hosted a birthday lunch the day after the deal on the house closed, has held three fundraisers, and loves that the space allows her to "live spontaneously," whether she’s popping out for lunch nearby or welcoming a friend who drops by in the evening. Smale relishes community work and philanthropy. She serves on the board of the Architecture and Design Council and Palm Springs Modern Committee and is a docent for the historic Frey house. "This is a new chapter in my life," she says. "I’m flying solo, and I’m having fun."

When her many guests’ plans extend past a single evening, they land like a feather in her two-bedroom guesthouse, decorated as an extension of the main house. As much as she looks forward to sharing her space, they all know her rule: "I don’t want to see you before noon!" Smale takes the morning to work, practice yoga, and ease into the day.

In her season of self-discovery, she has also uncovered stories about the house and met two other women who have lived there. She’s convinced they must have savored the property’s innate serenity just as she does.

"Once you come in and the gate is closed, it’s so peaceful. Really, just a wonderfully quiet home," she reflects. "My friend told me that if she lived here, she’d never leave. That she’d have the groceries delivered. And it’s true. I travel, but I don’t even want to go places anymore."