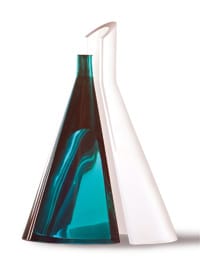 Wearing white gloves and a focused facial expression, Glenn Ostergaard maneuvers gingerly as he positions Red Ribbon, a cast-glass sculpture by Christine Cathi, between two other works of studio glass — Roll of the Dice (2008), a painted, fused and blown, cast, and polished piece by Scott Chaseling, and the cast Child’s Dress (2006) by Karen LaMonte — on a wicker cabinet. The LaMonte fills with light; there is no figure in the dress, but rather a translucent absence, motionless and draped in baroque elegance. It’s a perfect foil for the undulating Red Ribbon and the complex imagery “floating” and stagnating in Chaseling’s piece, which has since been installed at the Kaplan Ostergaard Glass Center at Palm Springs Art Museum.

“We’re always moving pieces,” Ostergaard says as he steps back to assess his placement. He and his partner, David Kaplan — a longtime collector of Bay Area Figurative paintings and sculptures — became interested in collecting studio glass during their frequent trips to their home in Australia, where Anna Gregson at Sabbia Gallery, a leading authority on Australian glass, has been a great influence in guiding their Australian and New Zealand collection.

At their 1969 Buff and Hensman-designed house in the Old Las Palmas neighborhood of Palm Springs, the couple’s Bay Area Figurative works — including a sculpture and two large paintings on paper by Manuel Neri, as well as works by Nathan Olivera, Paul Wonner, and Elmer Bishoff — play a supportive role to an ever-growing number of sculptures by contemporary studio-glass artists.

David Austin, co-owner of Imago Galleries and the glass-specific Studio in Palm Desert, admires Kaplan and Ostergaard for taking “a very studious approach, learning about the artists and their place within the Studio Glass Movement … [T]hey pretty much stopped in their tracks when they saw the work of Karen LaMonte. The large Pianist’s Dress Impression [2005] has become one of the centerpieces of the Palm Springs Art Museum collection.” Kaplan and Ostergaard donated the money for the museum’s purchase of the LaMonte.

Kaplan and Ostergaard became namesakes of the museum’s glass center two years ago, and they continually loan works to its ongoing exhibition, which also includes other pieces on loan and from the permanent collection.

The spectacular gray Stanislav Libenský/Jaroslava Brychtová cut-glass sculpture that was in Kaplan’s home office now enjoys a special place in the museum. “David got great joy when the Libenský was [in his office],” Ostergaard says. “He’d call me in when the light changed. It’s fun. We’re like kids. It’s candy.” Museum curator Katherine Hough considers the Czech artists Libenský and Brychtová “among the greatest artists who work in cast glass.”

Kaplan concedes, “I felt a loss when it went to the museum.”

In its place, the gestural, translucent West Coast Surf — cast, polished, and sandblasted — by London-born New Zealander Galia Amsel leads his eye out to the yard, where a larger-than-life Viola Frey sculpture adds monumental character and color.

Yugoslavian-born Emma Varga might be the household favorite. Kaplan and Ostergaard own eight of her pieces. “When we were in New Zealand, we saw a green box and bought it,” Ostergaard says. “[Varga] was taken by all the rolling green hills and sheep — a wonderful way of reflecting New Zealand.”

Hough notes, “[Varga] has developed innovative techniques that enable her to capture the clarity and transparency of glass while encapsulating within her sculptures three-dimensional images. She manipulates large slabs of glass that are composed of about 100 sheets of glass, and assembles mosaic elements on each sheet. Then she fuses all sheets together before grinding and polishing to reveal the finished sculpture. The sculptures have three-dimensional elements and fine details of floating, veil-like forms. Her works are inspired by nature — the deep blue sea or red sunsets of Australia and geographical references.”

Other standout pieces in the home collection include a Passage Series work by Emma Camden and the blown glass, silver-leafed, electroplated, and engraved Fish Catcher by Hiroshi Yamano.

“David and Glenn travel the world looking at glass,” Hough says. “When they discover an artist in a gallery or at a museum, they research and, if possible, meet the artist. They are passionate about following an artist’s career. For example, Nicole Chesney is an artist whose work they saw in Australia, even though Nicole is an American. She attended the Canberra School of Art of the Australian National University. David and Glenn acquired one work and met the artist. When [they established the museum’s] glass center, they offered funds to commission a piece and suggested Nicole. Vesper is the name of the commissioned work.

“Another artist they follow is Klaus Moje, who was born in Germany in 1936 and trained as a glass cutter and grinder at the family workshop in Hamburg,” Hough continues. “He moved to Australia to establish a workshop at Canberra, at the Australian National University (Chesney was one of his students). Moje is known as the ‘father of contemporary glass’ in Australia. [Kaplan and Ostergaard] met him, acquired several works, and invited him to visit the Palm Springs Art Museum.

“The Portland Art Museum in Oregon organized a traveling exhibition of Moje’s work that we visited in August. Moje created a magnificent work consisting of eight panels of kiln-formed glass and wanted a museum to acquire it. Because of David and Glenn’s relationship with Moje and because he had visited our museum, he and his gallery, Bullseye Glass in Portland, allowed David and Glenn to acquire the piece to be shown at our museum. The 8×4-foot wall panels — Untitled No. 10 (2006) — will arrive in Palm Springs after its national tour ends in the fall of 2009.”

With studio glass artists — most famously Dale Chihuly — gaining a broader profile in the art market, the medium has never enjoyed as much attention as it does today. Since the 1970s, purists have perpetuated a debate to classify glass as craft versus fine art. Fine art prevailed, with curators and collectors pointing to Harvey Littleton’s seminal public workshop in 1962 as the birth of the Studio Glass Movement. Artists were “liberated,” Hough notes, from factory workshops and set up individual artists’ studios.

Artists’ influences span the globe. Many important glass artists from throughout the world have worked at Pilchuck Glass School in Seattle. “I associate glass blowing with Pilchuck and the greatest glass blowers, such as founder Dale Chihuly, William Morris, Lino Tagliapietra, and many others,” Hough says. “Australia, on the other hand, has contributed other innovative glass sculpture techniques — such as cast glass, kiln-formed glass, fused and polished, and many others. In 1982, Klaus Moje became the founding head of the glass workshop at Canberra School and put its top glass graduates on the world stage, especially with the distinctive style of kiln-formed glass that he taught.”

Before Kaplan and Ostergaard acquire pieces, they often show Hough images of works to measure her interest in exhibiting them at the museum.

“Our relationship with the museum is mutually beneficial,” Kaplan says. “Dealers take us seriously. We told [Austin of Imago Galleries] that we like Clifford Rainey. David introduced us to Clifford and showed us a drawing, explaining that the glass sculpture [in the drawing] could be displayed with or without slices of glass at the base and [Austin] built a pedestal for the collection. David knows how the pieces are made, the techniques — and how to show them.”

“Swedish glass master Bertil Vallien made a statement, ‘Glass eats light,’ and this is especially true of more solid, cast works,” says Austin, who angled a Therman Statom piece in the living room to capture natural light. “The ability to have both natural light, say by a window, as well as the show business of intense halogen light at night, allows the viewer to experience a piece in two very different ways. This was especially true with Vallien’s Map, which they acquired last year. By the same token, a very delicate blown work will almost always look its best in a light-controlled space like a niche.”

Pulling off his white gloves, Ostergaard suggests he might acquire a piece by the Australian Stephen Proctor and another by Richard Whiteley. But that’s for next year’s budget. For now, they contemplate the arrival of the eight kiln-formed glass panels by Moje.