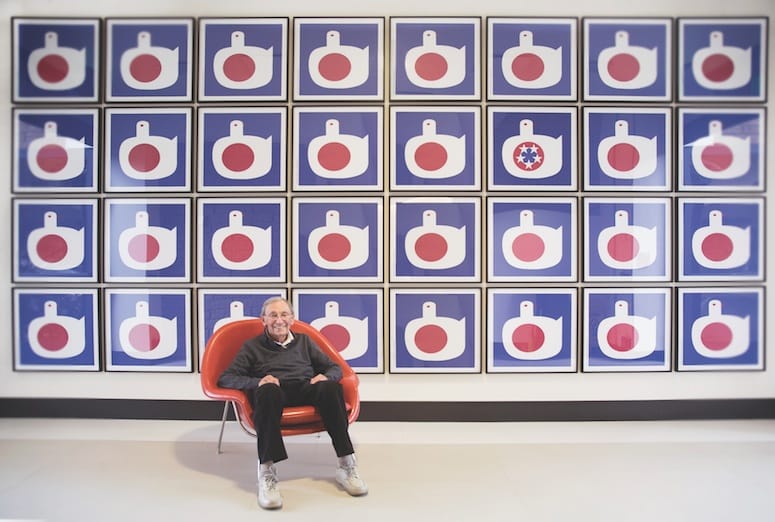 Palm Springs has always attracted wealthy visitors and transplants, and, circa 1960s, if you wanted to find them, all you had to do was look along a stretch of South Palm Canyon Drive where stood an array of moneyed institutions,  represented with bold and confident architecture.

The sleek Santa Fe Federal Savings and Loan and the Coachella Valley Savings and Loan buildings, designed by E. Stewart Williams, were there, as was Rudi Baumfeld’s not-so-sleek City National Bank, built in 1959.

And in 1971, the strip welcomed Merrill Lynch, Pierce, Fenner, and, of course, Smith to No. 415, created by Donald Wexler.

It was quite an addition. The architect’s assignment: Create a sort of “temple.” The powerful building Wexler designed was as majestic as any church — its thick-set overhang and severe pillars in front impressing investors, drawing them into its more than 13,000 square feet — room enough for even the company’s mascot to snort through the premises without causing damage.

But Wexler’s monumental work at 415 S. Palm Canyon Drive? What happened to that? This month, Palm Springs will find out, when the restored, refreshed, and repurposed building opens grandly during Modernism Week as the new Eisenhower Health Center at South Palm Canyon. Go back six years, when EMC’s CEO Aubrey Serfling hired Martin Massiello as the hospital’s new executive vice president and COO, recruiting him from a similar position at Loyola University’s Medical Center in Chicago. In a whither-thou-goest move, Martin’s partner, Jeff Weyant, relocated with him — and it was a no-brainer for both of them.

“Coming to live in the desert was an easy decision for us,” Weyant says. “We’d been coming here for nearly 15 years. And,” he pauses for effect, “Chicago is cold.”

The couple bought a midcentury post-and-beam home with a little Palm Springs local lore attached — Howard Hughes’ personal assistant had once made it her home — and Weyant began decorating the place. Design is in his wheelhouse. Back in Chicago, he was well known as a visual merchandiser, creating environments for a wide range of retailers, from, as he says, “Sears to Saks.”

Meanwhile, over at Massiello’s new place of employment, Eisenhower was looking for a space in Palm Springs to meet the growing needs of its patients. The Rancho Mirage main hospital, though close by, still was not convenient for all of the patients whose doctors were often headquartered in Palm Springs. And
Eisenhower was experiencing a higher demand for additional clinic services in Palm Springs.

“We needed a place for our specialists,” Massiello says. He ticks off the disciplines that the organization wanted to service: gastroenterology, neurology, cardiology, gynecology, pulmonology, endocrinology, and pain management. “And we wanted the site to have a definite affinity to Palm Springs. That was a big concern, that we take advantage of what people love about the city.”

Wexler’s classic building at 415 S. Palm Canyon, which was for sale, certainly filled the bill on that account. It represents some of his best work (“one of my favorites,” he allows) and embodies the signature style of Palm Springs. Negotiations were then completed, after much consultation with Wexler (“they were very respectful,” he says). After a $4.5 million good-faith restoration later, the doctors will see you now.

The restoration and the emphasis on the Palm Springs aesthetic was more than just window dressing. The architectural firm that worked with Wexler, Pacific 33 in San Diego, was also deep into the study of how décor affects health. (The firm had already designed the Eisenhower George and Julia Argyros Health Center in La Quinta and the Eisenhower Mike and Jan Salta Health Center in Rancho Mirage.) The folks at Pacific 33 know a lot about the healing effects of health-related environments.

It’s a growing field. Studies in such publications as Healthcare Design Magazine by Jain Malkin,  a former associate of the Pacific 333 partners, make clear the relationship between a clinic’s environment and healthy outcomes. Malkin, for example, wrote in her latest book, A Visual Reference for Evidence-Based Design: “Patients and visitors, even subconsciously, take in myriad details and form an opinion even before meeting the clinical team. … [When it’s right] it gives the patient confidence and serves as a stress reducer.” (If you’ve ever experienced high blood pressure while some busy nurse in a cold room takes a reading, you know how this can ring true.)

This décor-health nexus was ready-made for designer Weyant’s skills and his affinity for California’s midcentury modern aesthetic. The decision was made early on that the new clinic would toast this style. “We see it as very comforting,” he says. And Weyant knew just the couple whose works he wanted to surround EMC’s patients — Evelyn and Jerome Ackerman. Photographer Dan Chavkin at home, beside one of Evelyn Ackerman’s tapestries, Minstrel (1958), part of a triptych, hand-printed on burlap. His book about the Ackermans, Hand-in-Hand, rests on the coffee table.

A Passion for Craftsmanship

Which brings Palm Springs photographer Dan Chavkin into the story. Over coffee, he opens his brand-new book, Hand-in-Hand, to a double-page spread of one of his photographs that grace the text.

The spread he’s showing is one of the Ackermans’ most famous pieces, a multicolored tapestry, playing off the letter “H,” with delicately, expertly crafted hooked patterns that invite the eye. As the book’s co-author, Lisa Thackaberry, points out, the Ackermans created thousands upon thousands of such artworks. Their oeuvre was not limited to tapestries; it included mosaics, metal wall hangings, wood panels, and decorative art objects, all displaying their sense of the “new” that permeated the 1950s and ’60s and their lives.

Chavkin and Thackaberry are not the only ones over the moon with the Ackermans. Design icon Jonathan Adler, who created the interiors of our vaunted Parker Palm Springs, contributed a foreword to Hand-in-Hand, crediting the artists with inspiring his own pottery and love of things midcentury. Los Angeles Times contributor David Keeps wrote lovingly about the couple in his introduction, especially about their romantic relationship. And local fashion designer Trina Turk raves about them, too: “We bought two of the Ackermans’ door panels from the Alan Ladd building and installed them in our New York Meatpacking District Trina Turk boutique,” she says.

Therefore, when Weyant went looking for works to adorn the new EMC building on South Palm Canyon, it’s not surprising he leapt at the chance to acquire a few Ackerman pieces. Chavkin introduced Weyant to the now-widower Jerome Ackerman, and he landed four works for the building and an entire wall of Morning Dove prints.

It is a match made in midcentury heaven and fitting that these works — which stress sustainability, simplicity, and delighting the eye — would adorn Wexler’s building. These were his own guiding principles throughout his prolific career in Palm Springs.

Hopes are high that Ackerman will make the trip to the desert from Los Angeles for the opening and for all of the festivities planned around the new Eisenhower facility. Modernism Week itself plans an event there, including the screening of a film about the Ackermans, and a party with two things Modernism fans enjoy most: food and drink.

For medicinal purposes, of course.

The public is invited to a ribbon cutting and open house at the Eisenhower Health Center at 415 S. Palm Canyon Drive beginning at 4 p.m. on Feb. 13. On Feb. 14, Eisenhower will host a Modernism Week event featuring a 20-minute film about the Ackermans and their mastery of midcentury California design. A panel of art curators, authors, and artists will discuss the Ackermans and their work afterward. Visit www.modernismweek.com for more information.