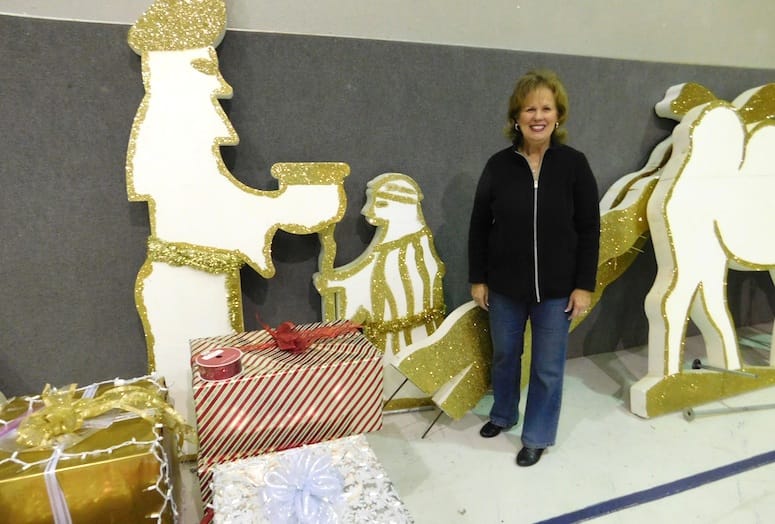 Carrie Fraser, minister of music at Desert Chapel in Palm Springs, stands among the pieces of the church's entry into the Palm Springs Festival of Lights parade.
PHOTO BY MARCIA GAWECKI

Greg Wood’s legacy lives on in the Palm Springs Festival of Lights parade.

Wood’s work is so elegant and beautiful, says Carrie Fraser, minister of music at Desert Chapel, who took over for Wood when he entered the hospital just before last year’s parade.

There were lots of missteps back then, Fraser says, when she and her crew were working from a pencil drawing of Wood’s and getting directions from him over the phone from the hospital.

Luckily, Wood sent over his designer friend to help straighten out the angel’s wings and show them how to “fly” them from 14-foot poles.
When the pastor told the Desert Chapel congregation that Fraser needed help last year, volunteers showed up in numbers.

“I didn’t know what to give them to do because it was an all-white nativity scene cut out of 4-inch styrofoam,” Fraser recalls. “So I gave them some gold glitter, and everyone decorated the edges of all the pieces, including the star, the flying angels, the wise men, camels and the manger! There was glitter everywhere!” 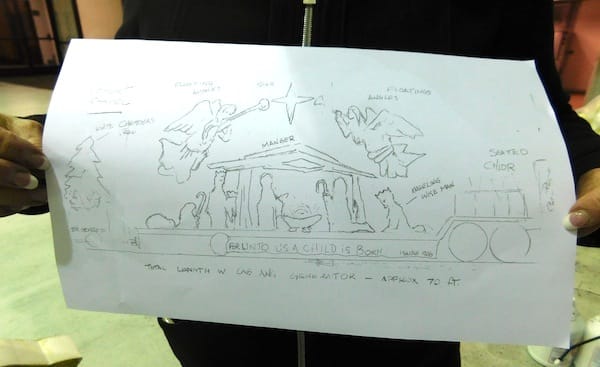 Wood didn’t like the change to his design, but those like Kelly Balmstark, this year’s float coordinator, think the gold sparkle coupled with the lights make the float entry shimmer. “You really can’t explain it, but it just looks so beautiful!” she says.

Besides the cut outs, Desert Chapel’s float has a manger with a live Mary and Joseph, a doll for baby Jesus, along with a dozen or so choir members lip-synching favorite Christmas hymns thought the hour-long journey down Palm Canyon.

“We’ll be singing like Milli Vanilli,” says Fraser, who is the church’s choir director. “You just can’t (put microphones on) all of the choir members!” 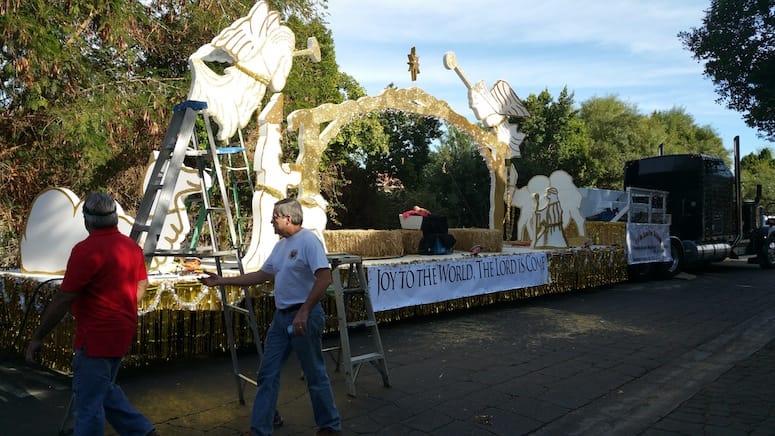 PHOTO COURTESY OF DESERT CHAPEL
Church members work on assembling the float onto the back of a 55-foot flatbed truck donated by Galena and Gary Jacobs.

Last year, just as they were ready to enter the parade, the worst thing happened. The float went totally dark. “The lights on the float started getting dimmer and dimmer, and pretty soon, we were in the dark!” Fraser recalls.

Fraser radioed her maintenance man, who came running down Palm Canyon. As it turned out, the lights were on “standby” mode, and just needed to be switched “on.”

This year, Balmstark and about a dozen volunteers put the entire float together in two days, starting with the painted floorboards and attaching the gold poles where the angels will “fly” from, to the manger housing the holy family, to the picnic table where the choir will stand to the presents behind the decorated generator.

Sound equipment came next with eight flood lights, gold and silver garland and white lights, including the spider web lights covering the front of the big rig donated by church members, Gary and Galena Jacobs.

Balmstark says labeling and storing everything in a shipping container made this year’s nativity assembly much easier. “We’re taking great care of it because it’s Gary’s legacy,” she says.

The inclusion of a nativity scene on the float is important to those at Desert Chapel, Fraser says, because it helps them spread God’s word, and invite more people to come to their midnight candle service, or even join the church.

“We’ll have our address printed on a banner,” she says.

More than 100,000 people are expected to attend the parade to officially kick off the holiday season in Greater Palm Springs.

Desert Chapel’s nativity float will remain assembled until after their Sunday service for their congregation to see. 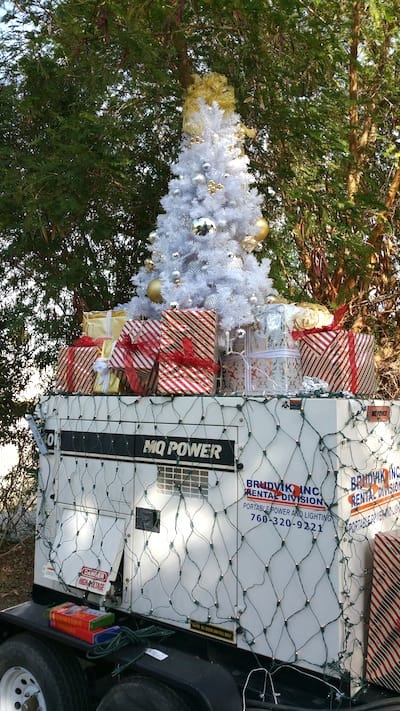 VIDEO: Watch float coordinator Kelly Bomstark take us through some of the steps to assemble Desert Chapel’s float entry.