Tell Them Willie Boy is Here 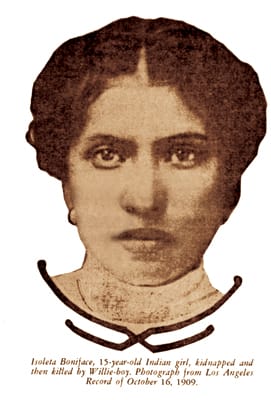 The Coachella Valley lays claim to an iconic Western tale, a saga so exceptional it has been called “the last great manhunt of the West.” The athletic antihero, an Indian named Willie Boy, outran a mounted posse of white men over 500 miles of boulder-strewn mountains and bajadas on the fringes of the valley in 1909.

Willie Boy’s story has been told in two books, countless articles, and a 1969 movie, Tell Them Willie Boy is Here, with Robert Blake starring as Willie Boy and Robert Redford as the Banning sheriff who pursued him. The hunt has seeped into our mythos. Modern geocachers and off-roaders make pilgrimages to Willie Boy’s grave. At a hipster café in Joshua Tree, you can order up Willie Boy hash. And for years, Landers celebrated an annual event called Willie Boy Days.

Only it appears that our best Western may be partly fiction. As the ending has been told, Willie Boy took his own life with his last bullet at a place called Ruby Mountain, about five miles west of Landers. But UC Riverside history professor Cliff Trafzer now declares Willie didn’t die at Ruby Mountain after all — an opinion supported by a modern forensic discovery.

Local Indians have always claimed that Willie Boy got away, but no one paid attention because it was only talk — oral tradition as opposed to the written word of white men. Trafzer’s sources are people such as Katherine Saubel, Joe Benitez, and Dean Mike: Indians who are respected by anthropologists and historians. They say the posse did not get its man.

“All the Indians know Willie was never caught,” Saubel says. “He went back where he was born — to Nevada.” The new ending to the old tale suggests we’d get more things right if we heeded Indian stories rather than relying just on books, reports, newspapers, and blogs.

Here’s the story as it has been written:

Willie Boy was a Chemehuevi Indian (an offshoot of the Southern Paiute) from Twentynine Palms, working in Banning as a fruit picker in the summer of 1909. He was courting a woman named Carlota (also known by other names), against her family’s objections. According to Indian law, the two were too closely related to wed. On the night of Sept. 26, Willie Boy went to see her father, Mike Boniface, at the Gilman Ranch.

Willie took along a stolen 30-30 Winchester. Provoked or unprovoked, Willie shot and killed Old Mike, as he was known, then fled into the hills, taking Carlota with him. (You can visit the site of the killing today at the Gilman Historic Ranch and Wagon Museum.)

The hunt for an Indian who killed another Indian might have been a small matter in those days, except that President William Howard Taft was visiting the area. The national press picked up on the story of the Indian who outran the lawmen. On the fourth day of the chase, the posse found the body of Carlota, and the press reported that the “Mad Dog of Morongo” had killed again. (Scholars later argued it was more likely the posse shot Carlota by mistake.)

The posse — at times as many as 100 men — was supplied with chuck wagons, canteens, Indian trackers, horses, and ammunition. Willie Boy grubbed for lizards and piñon nuts and depended on his knowledge of waterholes to stay alive. He ran from Banning, past where the Cabazon outlet stores are today, up through Whitewater, then into the Morongo grade through Pipes Canyon (now a Wildlands Conservancy preserve) and on out to Twentynine Palms, then back to Ruby Mountain.

Willie was one of the last of the elite Chemehuevi runners, who took such giant steps they were said to fly. The outlaw covered 50 miles a day on foot. Up in Morongo, at the Pierce Ranch, they still tell stories of finding Willie’s footprints marked by a superhuman 8-foot stride.

In the oft-told version of the story, Willie Boy ran as far as the Twentynine Palms Chemehuevi village (now the 29 Palms Inn), then circled back and ambushed the posse at Ruby Mountain. Holed up in the rocks, he shot at the men’s horses — to put them on even footing, some say. One man was hit, the bullet shattering the handcuffs in his hip pocket and sending shrapnel into his hip. As the posse left to take the injured man for help, they heard a single shot up in the rocks.

When the posse returned a week later, they fired at the rock pile where Willie Boy was last seen; a cloud of green blowflies lifted off, suggesting their prey was dead. They climbed the hill to find a bloated corpse. A reporter for the Los Angeles Record, Randolph Madison, was along for the hunt and took photos of the body, with the posse posing with their rifles like Hemingways on safari. Claiming the body was too decomposed to be moved, they piled juniper and greasewood on the corpse and burned it on the spot.

Southern California Indians consistently said Willie Boy escaped. As early as 1911, a story appeared in the Banning Record about a Chemehuevi chief, Pechoca, who claimed he had smoked a pipe with Willie Boy under a yucca in Arizona. Others said they saw the outlaw at a fiesta; there were rumors that family members took food to his hideouts.

Joe Benitez, an elder of the Chemehuevi tribe, is a grandson of William Mike, Willie Boy’s victim. “My mother said Willie Boy went north to be with the rest of his Southern Paiute family,” Benitez says. “It was the Mikes’ family story. You’ve got to put faith in that.”

The Indians are used to being ignored by white historians, so they’ve never tried to set the record straight. Alfreda Mitre, tribal chair of the Las Vegas Paiutes, says she also heard from her grandparents that Willie Boy escaped and came to live near Las Vegas. “We don’t care if you believe us or not,” she says.

In fact, Native American oral tradition has a higher standard of believability than most written history, which sometimes is verified by one writer or editor — or no one at all. Trafzer says people who grow up in an oral tradition are drilled and checked on their facts until they get it right. “That’s traditional education,” Trafzer says. “You learn to listen and learn your lesson well.”

Richard Stoffle, a University of Arizona anthropologist, says oral tradition applies to vital matters such as migration routes and lineage. “They are stories so important we can’t let them fail,” he says.

Often, the oral narratives turn out to be accurate when corroborated with physical evidence. For example, Indian stories about the rising and falling of ancient Lake Cahuilla, where the Salton Sea is today, have been proven correct by modern-day archaeologists.

For those who demand proof on paper, there’s yet one solid piece of evidence: the photograph of the body the posse claimed was Willie Boy.

Randolph Madison’s photo shows a body partially shielded by scrub and boulders. The man is lying on his back, suspenders arranged and shirt tucked in. The face was turned away from the photographer, so the bloated body was not recognizable as Willie Boy. This is curious because in the Old West, when you got your man, you dragged his decaying carcass through town — or at least took a clear mug shot. It didn’t matter how bad he looked.

The corpse also looked too neat for a man who had run for his life across the desert for 500 miles. Could Willie Boy have tucked in his shirt and tidied up before removing his boot and putting his big toe to the trigger of his Winchester 30-30 — as reports said he did?

Debbie Gray, forensic anthropologist for the Riverside County Coroner, knows a lot about bodies found in the desert, having examined them under a variety of circumstances. Examining the photo, Gray notes the body was “articulated” — meaning the arms and legs were still attached. He hadn’t fallen apart or been pulled apart by animals. There was no “insect activity.” And his shirt was way too clean.

While the official story says Willie Boy lay dead atop Ruby Mountain for a week before the posse returned, Gray says in her opinion the corpse in the photo had been dead less than 24 hours. Her conclusion rocks the foundations of our iconic tale.

Consider that the posse had good reason to fake a denouement. Its members were exhausted from chasing around the desert for 10 days, and the national spotlight on their ineptitude embarrassed them. The constable who led the posse, Ben de Crevecoeur, was known as a taleteller, according to his great-granddaughter, Zoë Erickson. “Ben did like to tell a story, and I imagine the fish did get a little bigger,” she says.

If he didn’t die, where did Willie Boy go? If you want to put faith in Indian narratives, you can’t stop with the comfortably plausible. In Indian stories, men turn into bears and rocks talk. In the Robert Blake movie, Willie dons a ghost dance shirt. In fact, Cliff Trafzer says Willie Boy was a ghost dancer, a follower of a mystical Indian movement that believed the world would be cleansed of white men and returned to the aboriginals. Stoffle, too, says Willie was a ghost dancer, and ghost dancers could not be killed; they could only be transformed.

In that case, keep your eyes open when you’re out in the desert at dusk and you may glimpse our local antihero bounding over bajadas — taking his flying strides.