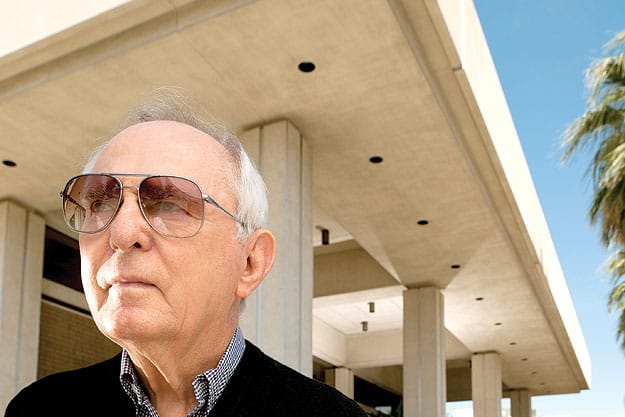 “I always point out the high school [campus] and talk about how many famous local architects worked together,” says Johns, a Palm Springs Preservation Foundation board member. “Next February, what will I say?”

Johns’ confusion may in part arise from the fact that the school board overlooked the building’s history.

“It was in March of this year that I was informed that Wexler/Harrison had built it,” says Richard Clapp, PSUSD board president. But it was 2008 when the board targeted the site and January 2010 when it gave final approval to demolish the administration building to site a new structure to accommodate the school’s expanding band program.

“It was a teacher working for the school district who brought it to our attention [in March],” says Ron Marshall, preservation foundation president. The foundation quickly wrote a letter to Superintendent Christine Anderson, recommending that the district “immediately consult with an architectural historian … in order to better understand this historic resource.”

Wexler himself weighs in on the dilemma facing the parties involved: “To preserve something, it should be worthy of preserving. Just because it is 50 years old, that’s not the whole story — it’s whether it’s good design that’s worth preserving.”

Indeed, the whole story extends far beyond one building. Now 86, Wexler has been influential in shaping the look and feel of classic Palm Springs. He emerged as one of the major players in the heyday of modernist architecture, along with contemporaries William Cody, Albert Frey, John Porter Clark, and E. Stewart Williams. Collectively referred to as Palm Springs’ “big five” modernists, they often collaborated on major projects, including the Palm Springs High School campus on Ramon Road.

Wexler is widely revered for his residential projects, particularly seven steel case study houses he and Harrison built in 1962. Earlier this year, one of those houses was listed on the National Register of Historic Places — a significant milestone for the community.

Palm Springs Art Museum celebrated his legacy in 2011 with an exhibition titled Steel and Shade: The Architecture of Donald Wexler. In the accompanying catalog, Lauren Bricker, a professor of architecture at Cal Poly Pomona who oversees the drawings Wexler donated to the school, notes the significance of his connection with PSUSD among his work on more than 100 school buildings:

“This is where he first developed his attraction to steel, after Dr. Wallace Muelder, superintendent of PSUSD, asked him to develop a concept for less costly classroom buildings.”

The first such classrooms were built at Cathedral City Elementary School in conjunction with U.S. Steel. These were so successful that U.S. Steel used them in a 1958 ad campaign (“Tomorrow’s schools today”). Those classrooms inspired steel classrooms at other valley schools — including at Palm Springs High School, where they are still in use today.

A Desert Sun newspaper article in March quoted Julie Arthur, PSUSD’s executive director of facilities planning and development, saying the administration building “is a block building that’s really not under [Wexler’s] area of expertise.” However, at the time it was built, the building was published in an industry magazine as an example of excellence in masonry in architectural design. The preservation board sent another letter to the school board, stressing the need for a complete architectural survey of all the buildings on the high school campus and offering to provide administrators and board members a tour accompanied by Wexler and O2 Architecture founder Lance O’Donnell, who often collaborates with Wexler and considers him a mentor.

A few days after the tour, preservation foundation board members and Wexler met with the school district to propose an adaptive reuse of the building. They showed that, in 1985, Wexler had presented a plan to restore and expand the structure with a two-story addition.

“At this point, there had already been thousands of discussions and tons of people involved,” Arthur says she explained. “It’s too hard to backtrack and start all over.” Additionally, she said, their proposal would be too expensive.

As the preservationists continued working on a presentation for the school board’s May 8 public meeting, about 30 local architects — including modernism greats such as William Krisel and Hugh Kaptur — signed an “open letter” to the school board to support efforts to save the Wexler building.

Before an audience of about 200 preservation activists, students, and parents at the May 8 meeting, preservation foundation members unveiled the adaptive reuse plan designed by O’Donnell in conjunction with Wexler. The plan not only provided all the necessary classrooms, dressing rooms, and storage facilities included in NTD Architects’ plans, but also preserved the notion of honoring historic architecture and sustainability with more space and less cost.

“The school board doesn’t understand the green movement,” Marshall says. “It is hypocritical for them to ask students to recycle cans, but not repurpose an entirely good building.”

Johns addressed that topic at the board meeting.

“I said, ‘What you are teaching these kids tonight will stick with them. Twenty years from now, one of the kids in this room could be on the city council, could be on the planning board, and what you teach them here tonight will affect their future decisions and our city.’”

The school board, however, stood by its previous decision.

“Our job is to listen to input, but the decision had already been made,” Clapp says. “So we were listening for information that would have drastically changed the situation, but it didn’t change the circumstances or provide us with any new information.

“This building project, it’s important. But anything that distracts from our primary mission, which is education of students, comes second,” he continues. “It put a strain on the time and money here at the district office. I wish they could have used it on something else for the children instead of lawyer fees and such. From our perspective, we really would rather not have done all this.”

Johns, even while on the losing side, feels he and his colleagues achieved something positive.

“What has come out of this is increased community enlightenment and the school board’s enlightenment regarding architectural preservation,” he says. The board did agree to conduct a historical inventory of the campus.

“This will change how things are done,” Clapp says. “We are doing a full-site survey. I don’t think that would have ever happened without this conflict.”

The school board hired Pam Daly, an architectural historian consultant in Riverside, to conduct the survey. In May, she issued her report on the administration building.

“This building is International style, but it doesn’t have the parts I like to see in buildings of this type,” she wrote. “This style is known for the interaction between positive and negative light and the push and pull between horizontal and vertical elements, and this is what was missing from this building. … Wexler did what he could for the money. It was a simple building.”

While Wexler says he is sorry his building will be demolished, he acknowledges the importance of progress.

“It’s not just about preservation. It’s also about design of new work, which is just as important, if not more important,” he says. “But the quality of the buildings [today] is not the same.” The Palm Springs High School administration building was continually occupied and functioning for 55 years.

Wexler also expresses concern about the effects of hiring out-of-area firms in a city where signature architecture is integral to its identity.

“Up until 20 years ago, the school district only considered local architects to provide their work. Not only were they interested in doing a good job, but they also had to live with it. The change that has come about now, with choosing outside architects, I think, is remiss. The talent and capability is here. But there is something more to it. Midcentury modernism has become a plus for Palm Springs. People travel from all over the world to be a part of it. The [school district] administrators should realize how much the architecture has helped the community. They should be proud of it and part of this advocacy.”

“There is this attitude in America that ‘new is better.’ There is not enough respect for historic sites. Until we educate people that they are meaningful for the community in many ways, for showing growth, change, and new ideas at different points in history, they won’t understand the importance. This isn’t an easy thing to communicate to people.”
— Sydney Williams, curator of architecture and design, Palm Springs Art Museum

“We think the man on the street is a preservationist in Palm Springs. There are people who would wear a pin, or buy a book, or donate money, but would never get up and speak to the city. They contribute in different ways.”
— Ron Marshall, president of Palm Springs Preservation Foundation

“We have been put in an adversarial position here, but the board has no problem with Palm Springs Preservation Foundation. They are all honorable people with honorable goals. I am very sorry we fell on opposite sides of this issue, but we are going to do our best to do our jobs and what we think is right.”
— Richard Clapp, president of Palm Springs Unified School District Board of Education

Wexler's works are not the only buildings threatened in the city of Palm Springs.  See the video below for a look at others that in danger of being destroyed.