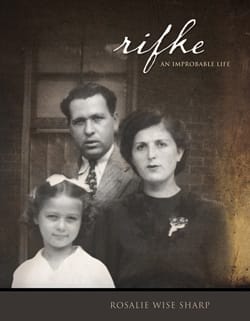 After five years of marriage, at Issy’s suggestion, we took our first vacation. Vacations had never been part of my life or expectations. Our honeymoon had been my only holiday. Shtetl people did not take holidays, nor did they even know the word “entitled” — in fact, “entitled” is not in my Yiddish dictionary. For our first vacation, we drove to Niagara Falls and spent three days in the Midtown Motor Inn. We thought the place was so-o-o glamorous; we raved ad nauseum to each other about everything. We opened the sliding glass doors and stepped out to the patio, a concrete square placed on the grass, just large enough to hold two webbed plastic chaise lounges on which we promptly stretched out, in the sunlight, as we thought all good vacationers should. That night we both had such wicked sunburns we couldn’t even touch.

A year later Issy would open his own, very much nicer, midtown motor hotel.

In 1962 I also took a holiday on my own, because I had missed backpacking as a teenager and still had never been on a train. So I resolved to take the overnight train to New York and stay at the YWCA. Issy wouldn’t hear of the Y and browbeat me into staying at the Plaza Hotel. In retrospect, I should, of course, have stayed at the Y. The plan was that I would shop and go to galleries for two days, and then, at five o’clock on the Friday, we would meet up in the Palm Court Bar. I went to three museums and Bergdorf Goodman, my first shopping experience alone and as a grown-up, the first clothes I had bought in seven years — and the most at one time. I found a dramatic white chiffon skirt and black top and also a shoulder-length Marilyn Monroe-style blond wig. Since I have a problem with punctuality — I’m always early — I showed up in the bar 15 minutes ahead, rigged out in my new gear and platinum hair. I took a table near the string quartet that may have been playing “Some Enchanted Evening.”

Issy arrived, looked around, and sat at a table for two across the room. He ordered a drink, probably a rye and ginger ale. (Now he drinks very old Scotch.) Our eyes met and he gave me an appreciative flirty glance but no sign of recognition.

I ordered a club soda.

He made no move.

I sipped my drink and waited.

Still no move. He didn’t know me.

He, of course, thought I had dyed my hair blond, which I didn’t contradict during his declarations that the colour looked great. Meanwhile I must have bored him as I gave him a breathy, minute-by-minute account of my time in New York: tedious descriptions of the paintings of Turner and Boucher at Henry Clay Rick’s beautifully scaled museum home and still more about Picasso’s horrifying 24-foot-long masterpiece mural, Guernica, at the Museum of Modern Art. I told Issy that the Germans’ bombing of the ancient city of Guernica, as allies of the Spanish during the Civil War, had been their test run for World War II.

While I went on and on — in a voice that reaches an unpleasant, off-putting pitch when I’m excited — I slowly raised my hands and reached up as if adjusting a hat that has slipped back and pulled my wig slightly forward. Issy fell back and collapsed in laughter. The Palm Court musicians played on while we caught up. And the evening and night were splendid — as good as it gets.

Living in a two-bedroom apartment with three kids had its difficulties, but only in retrospect. In the winter I had to dress all three and myself and then summon the elevator, by which time we were all in a sweat. After six years at Bathurst and Roselawn, we moved to a spacious, modern four-bedroom house in Hogg’s Hollow in 1962. …

Isadore was working on his second hotel and we enjoyed a new measure of prosperity. Our Hogg’s Hollow home was designed by Peter Dickenson, who had drawn up the first Four Seasons Hotel in Frank Lloyd Wright style. The place he did for us featured wood and fieldstone accent walls both outside and in. It wasn’t the style of house we had wanted at first. Before Peter drew up the plans, we drove him around the corner and insisted he see our idea of a dream house. He was not impressed. After studying the building for a few moments, he sniffed. “Oh, I see you have a fondness for mock Georgian.