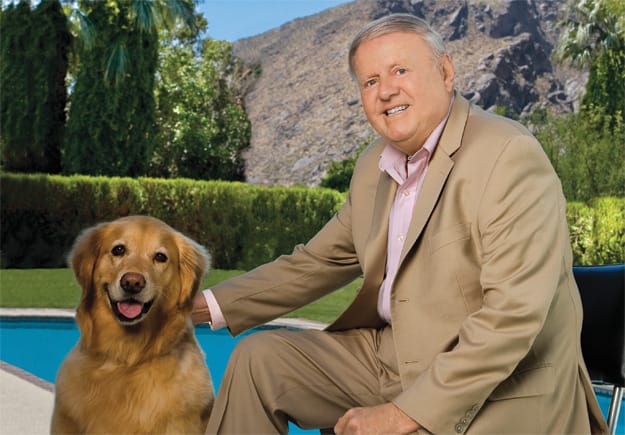 “Have you ever swum in the Salton Sea?” Dick Van Patten asks while sitting on the veranda at Melvyn’s Ingleside Inn. He has, he reports — about a year ago. “It was exciting!” His eyes light up.

Then he thinks of a Palm Springs destination and pastime he likes even better.

“I love the hiking even more than the Salton Sea,” he says, referring to his experience in the Indian Canyons. “It’s the real thing. I couldn’t get over it. A half-a-mile in and you’re in wilderness. I love hiking here more than anyplace else.”

Van Patten is in Palm Springs on this late April morning after entertaining guests at a Melvyn’s dinner series talk the previous night, during which he talked about his support for Guide Dogs of the Desert (through his company, Natural Balance Pet Foods), his acting career, and his new book, Eighty is Not Enough.

“They were going to sell my book,” he says. “I really felt chintzy, demeaning about it, so I donated the money to Guide Dogs. It made me feel much better.”

The first words Van Patten speaks at his dinner presentation concern his wife, Pat (they celebrated their 56th anniversary a couple of days earlier). He tells the crowd that the secret to their long marriage is a weekly candlelit dinner at a romantic restaurant. “I go on Mondays and she goes on Thursdays,” he jokes.

Van Patten smiles often, laughs easily, and clearly is as smitten with his wife as he was when they met — for the second time (the first being when he sat next to her in New York City’s Professional Children’s School and tried to copy her homework). She was a June Taylor Dancer when they were both rehearsing for different shows (she for The Jackie Gleason Show, he for I Remember Mama) at New York’s Grand Central Station, and she was engaged to be married in two months. Van Patten says he asked his show’s director, “How can I break that up?” The director promised to write a part into the show where she would teach him how to dance. “She’s very gullible,” Van Patten says, a grin spreading across his face.

ON HIS GAME
The couple and their three sons — Nels, Jimmy, and Vincent — have been avid tennis players (Nels and Vincent were pros). After two strokes, Dick Van Patten no longer plays. “It’s very tough,” he says. “I miss it so much.”

Van Patten played desert courts many times, often in celebrity tournaments. Although he calls actor Bernie Kopell (Get Smart, The Love Boat) his fiercest competitor, Van Patten says former Palm Springs Mayor Sonny Bono also “had the edge” over him. “He used to cook for me at his house. He was a great cook. I miss him a lot,” Van Patten says. “He used to make the best braciole.”

Van Patten still has friends in the desert; and though he doesn’t visit as often as he used to, he has a couple of favorite spots in Palm Springs: Melvyn’s, The Willows, and the casino. The grandson of a bookie, Van Patten has had a lifelong passion for gambling. He could handicap a horse by the age of 10 and was expelled from school at 14 for writing a composition on “How to Beat the Races.” These days, he owns two fillies that race at Santa Anita Park and haven’t been performing as well as he’d like (“It’s embarrassing,” he says).

As for the casino, he’s only interested in poker. “No blackjack, no roulette. I feel that’s completely luck; whereas with horses and poker, you can really use your head.” Van Patten — on behalf of Natural Balance — even hosted celebrity poker tournaments at Fantasy Springs Resort Casino in 2005 and 2006 that benefited animal nonprofits.

A LIFE OF CARING
“When I was a kid, I wanted to have a pet shop when I grew up,” Van Patten says. In a sense, he got his wish much earlier. His aunt took him to a pet shop every week near their house in Queens, N.Y. His first pets were horned toads, then turtles, chameleons, snakes, and rabbits before he got a cat and dog.

“I had a complete menagerie,” he says of his third-floor bedroom in a Victorian house, “and I had a goat in the back yard.”

He also had an alligator (Oscar) in the bathtub — after it outgrew its aquarium and until his grandmother demanded its ouster. He gave Oscar to the Central Park Zoo, where he visited his former pet, though he admits, “I wasn’t quite sure which one was him.”

Son Jimmy had nontraditional pets as well: five rats. When the family prepared to move from their Hollywood house, he gave them to next-door neighbor Michael Jackson.

The Jackson family moved next to the Van Pattens shortly before the Jackson Five hit it big. The three Van Patten boys and the Jackson brothers played touch football in the cul-de-sac. If the Van Patten boys weren’t home, Michael would help Pat do housework. “He was so kind and sweet,” Van Patten says, his voice revealing sincerity and tenderness. Throughout the years, Michael stayed in touch, calling them even from as far away as Australia. “We have a letter from him framed that says, ‘I miss you guys so much, and I miss cleaning your house.’”

FROM CUTE TO CROOKED
There’s another framed letter in the house: one written to Van Patten when he was 6 (three years after he began modeling) from Stan Laurel that says, “You are a cute little tyke, Dickie,” and predicting the young boy had a great future in acting.

A list of Van Patten’s radio, stage, television, and film roles bears out Laurel’s foresight. Though he’s best known by the older generation as the son in one of television’s first sitcoms, I Remember Mama (son Nels is named after his role on the series), and by the next generation as the father in Eight is Not Enough, Van Patten could be singled out for the quirkiness of his film credits, which include Soylent Green, Westworld, High Anxiety, Spaceballs, and Robin Hood: Men in Tights — plus an appearance in the Smells Like Nirvana music video.

His favorite film projects have been those directed by his good friend Mel Brooks. “They’re fun,” he says. “You laugh the whole time you are shooting.” Brooks, he notes, is the person who “made” him write Eighty is Not Enough.

Van Patten’s latest acting project, an HBO series (in pilot phase) with Dustin Hoffman and Nick Nolte called Luck, goes against his “type,” but could be his most apropos role yet, because it revolves around a racetrack.

“I play Slick Dick,” he says. “[Deadwood Producer] David Milch said, ‘You have always played the nice guy. … I want you to play
somebody crooked, not so nice, a real cheat.’”

Van Patten brightens at the suggestion that he should get his fillies on the show, which is filmed at Santa Anita Park. After all, they are in part responsible for his lasting acting gig.

“[Milch] saw me at the racetrack every day, and so he asked me to be in it,” he says. “It’s about the racetrack, which I love. And I love working for David Milch. He has never had a flop, so that’s exciting.”

During an appearance on The John Davidson Show, Dick Van Patten met drummer Joey Hedrick. When they got together the following day, Hedrick told fellow animal-lover Van Patten about his idea for a much-needed product.

“He said it was going to be a health food that would help animals live longer and feel better,” Van Patten recalls. “The whole thing appealed to me.”

In 1989, Natural Balance Pet Foods started small, selling some food and giving some away to places that rescued dogs. For the past four years, the company has donated all the food for Guide Dogs of the Desert. It also provides food to other training facilities and humane societies.

The formulations have grown to encompass nutrition for large cats, wolves, polar bears, and snakes.

“Joey thought it was terrible that people who had snakes would have to give them live mice,” Van Patten says. “It was wrong to kill the mice like that.” Natural Balance developed a food that, although it doesn’t move, duplicates the aroma and taste of mice.

Natural Balance fed the animals at Michael Jackson’s Neverland ranch and is used at many zoos (including the San Diego, Philadelphia, and Bronx zoos). Van Patten smiles when he thinks that, because alligators live a long time, he’s possibly even feeding his childhood pet Oscar.