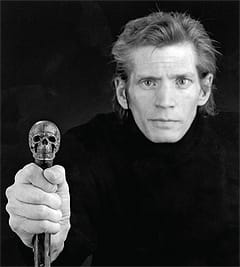 Mapplethorpe never liked the word “shocking.” He told ARTnews in 1988, “I’m looking for the unexpected. I’m looking for things I’ve never seen before … I was in a position to take those pictures. I felt an obligation to do them.”

Portraits most likely will awe, not shock. To be sure, there are shocking personalities captured — adult film star Peter Berlin, singer Grace Jones, and rocker Iggy Pop among them — but there prevails a purity in the way Mapplethorpe used plane geometry to compose his picture surfaces and the translucent light in which he bathed his sitters.

“People will be impressed by Mapplethorpe’s ability to capture what was most compelling about these iconic figures from the New York world of art, culture, and celebrity while simultaneously investing them with the signs of his own desire,” says Daniell Cornell, the museum’s deputy director for art and chief curator.

Gordon Baldwin, a 21-year Getty Museum veteran, guest-curated Portraits. Baldwin had the advantage of being on the New York scene while Mapplethorpe was working, and he also worked closely with the seminal photography collection that Mapplethorpe’s partner, collector Sam Wagstaff, donated to the Getty. The collection had a profound influence on Mapplethorpe’s evolution as an artist, as he would study the masterpieces that Wagstaff would take home in bulk during the 1980s when photography was still undervalued by serious art collectors.

Mapplethorpe was only 42 years old when he died of complications from AIDS in 1989. Born into a lower-middle-class family in Floral Park, N.Y., he traversed the city’s punk underground scene of the 1970s with his girlfriend, poet Patti Smith, eventually making it uptown with Wagstaff in the 1980s. His output was considerable. In addition to portraits and sadomasochistic nudes were still lifes of flowers and statues, classic nudes, fashion images, and an extensive series of self-portraits.

In his lifetime, Mapplethrope was revered and denounced for pushing the boundaries of sexual experience. Cornell compares him to the 19th century painters Edouard Manet and Gustave Courbet, both vilified for challenging conventions.

“The only difference,” Cornell says, “is that we don’t have the benefit of hindsight to see how artists have anticipated the important shifts in understanding that future generations will take for granted. The curator’s challenge is to create conditions that make it possible for viewers to confront their own assumptions in a way that allows them to move beyond threat to understanding.”

While Portraits may not draw placard-carrying protesters at Palm Springs Art Museum, it still walks on the edge. “These sitters,” says Cornell, “many of whom are literary and visual artists, critics, and performers, are keenly aware that Mapplethorpe’s photograph will tell viewers as much about Mapplethorpe as it does about them. At the same time, they were intensely interested in what Mapplethorpe saw in them. There is a potentially dangerous territory into which the sitter and photographer agree to collaborate to create an artistic portrait. You can feel the energy that generates in many of these images.”