A Park in Peril 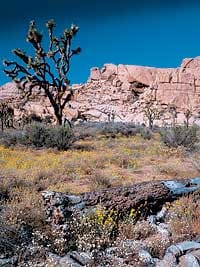 The Joshua tree took its name from Mormon pioneers who thought it resembled an Old Testament prophet waving his people toward the promised land. Today, it could be holding up its arms in a plea for help.

The park that bears the tree’s name draws 1.25 million visitors a year to explore its unusual wildlife, surreal rock formations and historic sites. Surrounded by the quiet beauty of the desert, visitors feel isolated from the stresses of contemporary life. But the park itself suffers from the pressures of the modern world. The private, nonprofit National Park Conservation Association last year named it one of  “America’s 10 Most Endangered National Parks.”

Plans for a huge landfill near Joshua Tree exemplify the threats he park faces, according to Howard Gross, NPCA California Desert program manager.

“The Eagle Mountain landfill would be the world’s largest, and we feel it is unnecessary and particularly inappropriate in the arms of a national park,” Gross says. “We’re talking about seven-mile-long trains and huge trucks bringing in 20,000 tons of garbage per day, operating 24/7.” He compares it to a major industrial complex abutting Joshua Tree — impairing air quality, lighting the night sky, and disrupting the park’s solitude, as well as disrupting the balance of nature.

“Once you start bringing in all that waste, you alter the ecosystem,” Gross says. “For one thing, raven populations in some parts of the desert have increased dramatically due to subsidies from humans. There are studies that show nearly 100 percent of juvenile desert tortoises in the vicinity of landfills have been killed by ravens. Putting in something like this disrupts the entire food chain. We’re risking the threatened species the park needs to protect. I don’t think a national park is the best place for L.A.’s trash.”

Something in the Air

Although much of Joshua Tree might look like pristine wilderness, it is not immune to one of the problems associated with urban living: pollution. It ranks near the top of the national park system in the number of days exceeding the national eight-hour ozone standard, according to Gross.

“That means that the elderly, children, and people with respiratory problems are advised not to undertake outdoor activities,” he explains. “That’s what people come to national parks to do.”

“It acts as a fertilizer, and native grasses that are adapted to survive in low-nutrient environments all of a sudden are at a disadvantage to nonnative grasses,” Gross says. “You now have this carpet of grass connecting all those trees, shrubs, yuccas. Once you get a fire in the system, instead of just burning out one tree or a couple of them, this carpet of nonnative grasses provides fuel and enables the fire to spread to a much wider area.” In 1999, the largest fire in the modern history of the park charred about 14,000 acres.

“They burn up not just the exotic grasses, but everything else in their path: piñon pines, junipers, oaks, and Joshua trees,” Zarki says. “What comes back is more exotic grasses and annual flowers that look pretty but don’t have the same ecological value.” The piñon pine nut, for example, is an important source of food calories for many desert animals. The trees take 50 to 150 years to mature, according to Zarki. “When exotic grasses burn every five to 10 years, your long-lived plants never get the chance to re-establish themselves. We don’t know what the long-term consequences of that are for wildlife, but it doesn’t seem like it would be a good thing.”

A recent NPCA study indicated that visitors inject about $46 million annually into the economies of High Desert and Coachella Valley communities and support more than 1,000 jobs. About 13 million people have visited in the 10 years since Joshua Tree gained national park status, and the park estimates that rock climbers comprise about one-fifth of its visitors.

“It’s a world-class destination for climbers, but because the park doesn’t have enough staff,” Gross says. “They understand the impact is climbers have, and they try to address them. But they aren’t doing it in a holistic way — not because they don’t want to, but because they don’t have the funding. For the most part, the climbers care a lot about the park as well and are willing to work with the park. The park service has a dual mission of making it accessible to visitors, but also making sure it remains unimpaired for future generations. Funding levels do not permit that.”

Hope on the Horizon

The past few years have brought some good news for those who want to preserve Joshua Tree National Park and the land surrounding it. A major development nearby was canceled, and conservancy groups have been negotiating with landowners. “Ecological protection and visitor enjoyment is a much better thing to have going on in the park’s premier viewpoint than a city with 12 golf courses,” Zarki says. “On the one hand, we have population growth along the western border, so we see the park becoming more of an urban park. On the other hand, you have people valuing the desert more than they have in the past. The important thing is for desert residents to understand that their voice is vital.”

The future health of Joshua Tree depends on cooperative effort among people who value the desert, according to Zarki.

“How are we going to maintain a viable national park that plays an important role not only in the economic health of the surrounding communities but in the social health of the surrounding communities as well?” he asks. “The National Park Service with its 80 employees we have here is not going to be able to solve the problem. It’s going to require partnerships with people and organizations, with public officials and political leaders. And there’s going to have to be some consensus about what  Joshua Tree means. What are we prepared to do to keep it healthy?”