A Passion for the Holidays 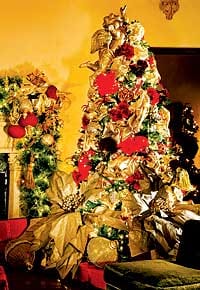 In the land of clean lines and minimalist designs, there’s one occasion when over-the-top is encouraged: the holidays!

Holiday designs are fun — and one of the only times that more is more,” says Philip Colavito, owner of C Group Interiors. Each year, Colavito and partner Dean Seymour transform an already-spectacular Palm Springs residence into a dramatic holiday tableau, creating a magical backdrop for a Christmas in October fundraising event that benefits a local charity. This year, the dynamic duo chose The Willows Historic Palm Springs Inn, the Italianate Mediterranean estate that was once the home of Marion Davies, long-time paramour of publishing magnate William Randolph Hearst.

“We chose The Willows because we wanted to create a design that would work with the opulent textile designs being used in clothing this year,” Colavito explains. “The trend is all sumptuous and rich textiles, with luxurious accessories. Since this property is an Italian villa, we thought it would lend itself perfectly to these finishes.”

The Willows is the only AAA Four Diamond-rated inn in Palm Springs. Originally a private home, it was built in 1924 and served as the winter estate of Samuel Untermyer, a New York attorney who was the first to collect a million-dollar fee. The property’s striking architecture includes a mahogany-beamed great hall, frescoed ceilings on the veranda, and a mountain waterfall that spills into a pool outside the stone-floored dining room. Over the years, the property has seen different owners and served as a private home and an inn. Today, The Willows has been meticulously restored to the grandeur of its heyday when it saw such notable guests as Clark Gable and Carole Lombard (who honeymooned there), Shirley Temple (who played there), and notorious New York mayor Jimmy Walker (who hid out there). Its eight guest rooms feature fine antiques, sumptuous linen, luxurious private baths, handmade tiles, stone fireplaces, hardwood floors, private garden patios, and mountain and garden vistas.

For this year’s Christmas in October, Colavito and Seymour sought to re-create the glamour that recalls the holidays at The Willows when Marion Davies lived and entertained there.

“For the living room, we chose red as the strong color,” Colavito says. “We thought that red would denote the passion that was so much a part of that home and her relationship with Mr. Hearst. Red creates a very moody atmosphere.

“We used cherubs in the trees in this room,” he continues. “This was a common element in trees during the time of Marion Davies.” Other tree decorations included red and gold baroque stylized ornaments, red amaryllises, red-beaded dragonflies, green Polish crystal drops with gold poinsettias, and red silk-covered gift boxes.

In the dining room, the team placed a 17th century painting over the buffet to create a strong element as a backdrop for this room’s high-end silver, gold, and moss-green ornamented tree. The tables were set with china featuring a hydrangea pattern in moss green, set atop silver-leaf chargers. The centerpiece was a carved brass deer and a custom vase embellished with crystal gemstones. The tablecloth was an antique silk velvet drape modified for the table.

“We placed multicolored gemstone butterflies around the table,” Colavito adds. “The beautiful waterfall [outside the dining room] and plants were the muse for this design.”

How do Colavito and Seymour create such strikingly different holiday designs from year to year?

“I study the architecture of the building and the interiors,” says Colavito, whose degree is in architecture and design. “We create a color palette and tactile range to complement both. We don’t dictate the design and force it to work; we allow the building to dictate the look. So often, you’ll see a designer install a holiday theme that works fine on paper but does not translate in reality. There’s nothing worse that seeing a frilly Victorian tree in a contemporary setting,” he adds.

The C Group Interiors team selects its materials early in the year. Designs are then drawn up and sent to various manufacturers for fabrication. His firm has designed holiday installations for the U.S. Capitol building, Madonna’s residence in the Hollywood Hills, IBM, Natalie Cole, Neil Diamond, soap opera sets, and scores of movies.

“We will often use common, everyday products and embellish them with silver or gold fabrics or gemstones,” Colavito says. “Also, our decorations are a larger scale than most. This is especially important in California, where the spaces are so large.”

The beneficiary of the 2005 Christmas-in-October event was the Court Appointed Special Advocate program.