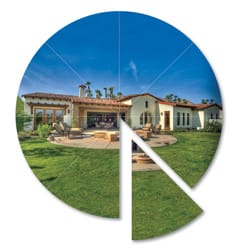 A nameplate on the door, family photos on the dresser, and groceries in the fridge separate fractional home ownerships at The Residence Club at PGA West from traditional timeshares.

While every fractional ownership club operates differently, The Residence Club at PGA West guarantees the use of 21 days a year as just a starting point for the 1/9th-share owners of its 30 villas. Once the owners have chosen their weeks, those remaining are up for grabs: first come, first served. A couple from Los Angeles or San Francisco might decide they want to come every weekend in May and June. If those weekends are open, come they can. They can even reserve more than one villa if availability allows — with only housekeeping and gratuity fees charged for each visit.

Owners receive a deed and can will, sell, or place their fractional ownership in a trust, similar to other types of real estate. “It’s an alternative way to have a second home. You have part ownership,” developer Marc Bailes says. “It’s much more than a timeshare; it’s a totally different concept.”

The notion of fractional ownership took a while to catch on since it first appeared in 1993 (with just six programs by 1996), but it has gained speed in recent years. The industry now reports an annual growth rate of more than 50 percent, with fractional ownership residences popping up in almost every tourist hot spot imaginable: Aspen, Colo.; Jackson Hole, Wyo.; Lake Tahoe; Whistler, British Columbia; Puerta Vallarta, Mexico; and Charleston, S.C. Owners of fractional residences may own 1/8th, 1/9th, 1/12th, or whatever share a property sets, entitling them anywhere from 21 days to four months of life in their fraction of a second home.

The boom of fractional ownership and the attraction of its resale value removed the stigma of timeshare vacations — as well as the intangibility — without removing the conveniences. These high-end residences aim to combine home ownership with the amenities of a club or hotel. A concierge to make dinner reservations, tee times, and spa appointments and use of numerous facilities are status quo at most residence clubs. At the Spanish Colonial-style Residence Club at PGA West, cooks lack for nothing. Salad spinners, cheese spreaders, rotisseries, and All-Clad barbecue tools for the grill are included. The morning newspaper arrives on the doorstep; and if the owners forget to order groceries before they arrive, there is coffee in the drawer to start that first morning. The three-bedroom residences are divided into two master suites and a separate guest casita. The great room with fireplace and 55-inch, surround-sound television and a formal dining room are comfortable yet fit for entertaining.

Past the pocket-door glass walls, a serious barbecue grill and fire pit await, while a “spool” (a small pool with both pool and spa functionality) bubbles away. Each home borders one of the club’s three 6,000-square-foot practice putting greens. Photographs, golf clubs, hot-weather attire, a special olive oil, or any other personal belongings can be stored upon departure and placed back in the home prior to arrival.

The idea behind many fractional ownership properties is to make owners feel that they own a second home, even if their share is in the entire property and not a specific home. All 30 PGA West residences, for example, have the same floor plan, furnishings, and décor. If an owner lands in No. 8 on one visit and in No. 11 the next, they will still find the bathroom light switch in the middle of the night and the signature waffle-weave robes hanging in the closet. Residence clubs attract fractional owners by taking the residential aspect a step further than a private home, starting with a bellman to bring arriving homeowners’ luggage into the villa and get them situated. Housekeeping services keep the villa neat throughout each stay. PGA West is in the process of finishing its clubhouse and pool, but ownership includes a social membership at nearby La Quinta Resort & Spa, where residents have preferential access to tennis, spa, fitness, and golf facilities, along with discounts on the resort’s products and services. As an added bonus, owners can trade their weeks for stays at other fractional residences through an exchange program with properties in Mexico, Utah, and Bermuda, among others.

While residents were getting settled in their new homes at PGA West, Stone Eagle’s fractionally owned casitas came on the scene. The Residence Club at Stone Eagle plans to welcome its first 1/8th owners in spring 2008. At the moment, just three residences (24 ownership opportunities) are offered.

“The Residence Club is in keeping with the great clubs around the country with national members,” says John Fitzpatrick, vice president of marketing for Stone Eagle. “The residences appeal to our national members as a convenient way to enjoy the club without the responsibilities of home ownership.” While the $300,000-$500,000 cost might sound steep for a three-week stint, which doesn’t include the golf, sales staff members are quick to point out that it’s more affordable and less of a hassle to own part of a home than all of it.

With partial home ownership on the rise — and the development of new residences ready to match it — the valley has seen only a fraction of what’s sure to come.

Correction
“A Piece of Home” (May 2007) should have stated that The Residence Club at PGA West has 32 villas that cost $279,000 for a 1/9th share. For that price, the fractional ownership of the villa belongs to the owner for life or until they sell it. Here are upcoming opportunities to own a piece of the desert

The Residence Club at Stone Eagle, Palm Desert
Construction begins this summer on three fully furnished casitas that this high-profile golf club will offer with 1/8th ownerships. The two two-bedroom residences and one four-bedroom residence are part of Stone Eagle’s 44-home residential enclave and are located steps from the clubhouse. Owners schedule three weeks in season (November-May) and any other time during the year subject to availability.

“Stone Eagle has brought in a younger demographic than you typically see at an upscale new golf club, because there isn’t that obligation to buy a multimillion dollar house to be part of the club” spokesman John Fitzpatrick says. Now these members have the option to stay on the property, just like full-time owners. “This appeals to our members who may not wish to take on an additional residence, but who know they want to be part of the desert and of a great golf community.”

The residences are scheduled for completion by the end of the year or early next year. Prices for a 1/8th interest in a two-bedroom casita start in the low $300,000s, which does not include golf club membership. The eight interests in the four-bedroom residence start in the low $500,000s.

The Residences at The Ritz-Carlton Rancho Mirage (formerly The Lodge at Rancho Mirage)
The Ritz-Carlton returns to its elevated location with a
$500 million renovation and expansion plan that includes a 154-unit luxury fractional ownership community in addition to a 244-room resort; two restaurants; two pools (one infinity, the other Olympic size with poolside cabanas); and a multimillion dollar, internationally branded spa. Units will range from an 844-square-foot condo to a 3,000-square-foot, four-bedroom villa with private plunge pool. Owners are scheduled to take up residence beginning in May 2008.

Fairmont Residence Club, Indian Wells
In early 2009, look for this 155-unit development to open next to a high-end retail site and two 18-hole championship golf courses. Residences will be offered in the form of studios and one-, two-, and three-bedroom plans ranging from 550 square feet to 2,700 square feet. The community will feature a concierge, restaurant, health club, and outdoor pool. Owners will have the option to include their units in Fairmont’s luxury residential rental program.