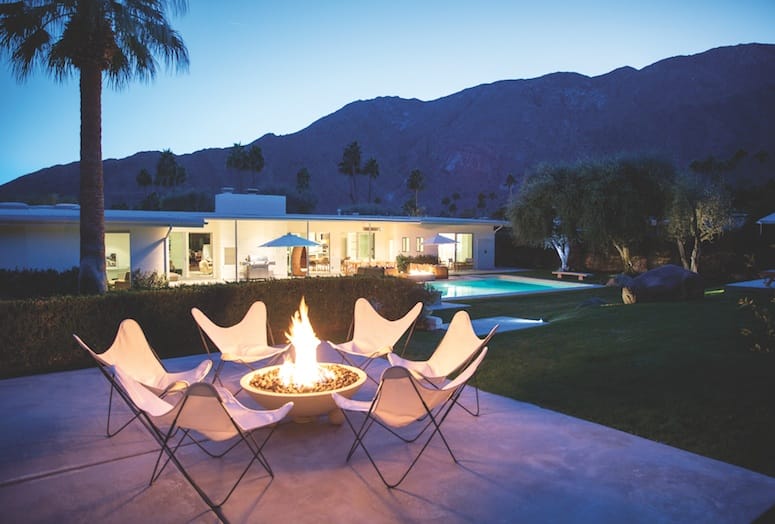 Editor’s Note: This story was written in 2015, so please understand some elements of the story may have changed since then.

Homeowners don’t always fall in love with their dream houses at first sight. Even houses with good lines and great views may need time to win our affection. That was the case, at least, with the Vista Las Palmas home currently owned by interior designer Effie Genovese. “I wasn’t all that overwhelmed with it,” says the native of Vancouver, B.C. She was put off by furnishings she thought were overly formal and found the color scheme oppressively neutral. “Cold and uninviting,” was her initial verdict on the 5,000-square-foot house, which she rented in 2008 for a week-long family vacation.

Even more damning, for a designer who values a sense of surprise and spontaneity: “It had no spunk.”

As in romantic comedies, however, people can find their feelings changing over time. By the end of the week, “I realized this is an amazing house,” she says. “I had to buy this house.” After several attempts, she was finally able to purchase it out of foreclosure in 2009.

“I think it’s very classic and understated,” she now says of the home, which dates from the 1960s (she doesn’t know the name of the original architect but plans to look it up at City Hall — someday: “I’ve been meaning to … but it never seems to happen, as I live in Vancouver and my time down here is so precious”). “The spaces are so great. The rooms are very simple, with the walls angled to maximize natural light. I like that it’s all on one floor. It was built for ease of use by a family or maybe an older couple.”

She also liked the interior surfaces and materials. “I fell in love with the terrazzo floors right away,” she adds. “I love the big glass doors and the indoor-outdoor effect of seeing the whole garden from the living room.” Rather than rebuild walls and cut new windows, as she has done in the past, she decided to confine her changes to furnishings, color choices, and artwork.

The challenge, for Genovese, was to work with fewer elements than she’s accustomed to. “It was just liberating to simplify everything, to have so much space and simple lines.” At the same time, she wanted to turn up the spunk. “When you enter a room,” she says, paraphrasing a designer she admires, “there should be a kind of tension. There should be an object that seems a little odd or out of place at first that later seems just right.” The designer’s cheekiness and confident sense of color are on display in the media room, with a coffee table made from a peeled log, two orange beanbag chairs, and a thick-pile rug from Crate & Barrel. On the fabric-covered wall is a painting by a Canadian artist.

In the wide-open media room, spunk takes the form of a few eye-catching objects. A coffee table made from a tree trunk is one provocation. Another is a pair of bright orange beanbag chairs suitable for casual TV viewing. (So much for stuffiness and formality.) An Italian-style sectional sofa — “not the kind of thing I would usually use,” she says — tucks neatly into a corner of the room. Behind the long sofa, Genovese has covered an entire wall in a dark neutral grass cloth, which serves as a backdrop for an exuberantly colored painting, the only object on the wall.

A cheekiness also shows up in the dining room, where another peeled log serves as the table. For the living room, she selected a lively abstract Brutalist-style metal structure to adorn the painted white stone fireplace. Dating from the 1950s, the sculpture is reminiscent of work by of artists Curtis Freiler and Jerry Fels, who go by the nom-de-plume Curtis Jeré.

In choosing interior colors and accents, Genovese limited herself to desert-like browns and golds, departing from the silver and chrome of her other interior projects, because “I wanted to pick up on the Moroccan influence on Palm Springs,” Genovese says. An important aesthetic influence is Jonathan Adler, who designed the interiors for Parker Palm Springs, and whose light touch and non-pomposity hold special appeal: “It shows that he has a sense of humor and doesn’t take himself too seriously.” Another source of inspiration is Kelly Wearstler, whose free-spirited and cheerfully irreverent work includes the most recent interiors in the Viceroy Palm Springs.

“I follow my instinct and my eye,” Genovese adds. While she enjoys shopping the vintage furniture merchants of Palm Springs, she doesn’t get hung up about staying period-true. “I’m not so particular that everything has to be original or vintage or anything like that; I would hate to be predictable,” she says.

Stylistically, the Vista Las Palmas house was a new kind of challenge. “I had never done this kind of midcentury home before; my other houses been more traditional,” Genovese says. Her decorating choices tend toward the “eclectic, incorporating traditional and modern, a mix of old and new.” This home’s no-frills modernism reminded her of her days as a student of industrial design in Canada: Designers like “[Eero] Saarinen and [Charles and Ray] Eames and all the people who were making this type of furniture were people that I studied in school,” she notes, so working on a house from that era “was going full circle for me.” The furnishing decisions were “about being minimal. I find [myself] very sensitive to visual clutter, and this house is a place I go to mentally unclutter.

“I have to say this is probably my favorite house,” she adds. “It is so easy to be in and very calming. I try to get down from Vancouver once a month, either with family or [with] friends, but sometimes I sneak away all by myself when I need to relax and recharge my battery. From the point of view of living, it’s probably the nicest house I’ve had.”

That enthusiasm extends to Palm Springs itself. “I love it that it’s so green here in the middle of winter, when everything’s dead in the rest of the world,” she says. “I love hiking the local mountains and riding my cruiser through Las Palmas and checking out the neighborhood. I love the gardens and the palm trees almost as much as the architecture.”

And, referencing the 1998 movie about people who time-travel back to the 1950s, Genovese says, “It’s kind of like a hip Pleasantville.”