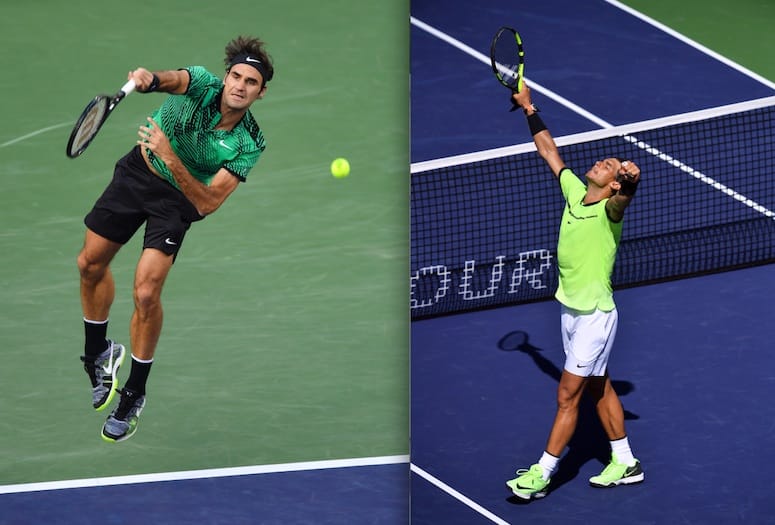 In Monopoly, you have to pass go. In big-time pro tennis, Nadal has had to, in key moments, pass Fernando Verdasco.

The journey and its history played out Tuesday, in 95-degree sunshine, on the massive center court at Indian Wells Tennis Garden. To the casual fan—especially those who hadn’t checked out the draw–Nadal’s early afternoon match was just another pause on his way to later-week semis and possibly finals. He was seeded No. 5, his opponent, Verdasco, No. 29.

A quick glance would bring only trivial assessment. Both were left-handed, both from Spain, both heavy-hitting ground-strokes. If you were looking for serve and volleying, your best bet was to head down the street to some public courts and watch two 17-year-olds.

But a deeper look shows that Verdasco has been, and could be, much more than just another early round notch in Nadal’s belt. This would be their 19th match on tour. Nadal leads 15-3 lead. Clearly, there are memories, some of them searing. This was a third-round match with some storybook history. Part of that history included Federer, who had to beat former USC star Steve Johnson later in the afternoon to get a Round-of-16 match against Nadal.

Anytime they play, it’s magic, even when they are a bit off their game or under the weather. Roger-Rafa makes headlines, even in sports sections that now treat tennis like it’s junior varsity water polo. They have played 35 times, Nadal winning 23 of those. Federer has won 18 major titles, more than any male player in history. Nadal has won 14, including nine French Opens.

When they play, it is almost always at, or near, the end of a tournament. The earliest they have ever met was the first time, at the Miami Masters in 2004, in the round of 32. Federer was already No. 1 and Nadal was a 17-year-old just starting to acquire a phenom’s rep.. Little did anybody know how phenomenal the phenom would become. Federer, then 22, won that match, 6-3, 6-3.

Because of injuries that led to lower seedings for each at this year’s BNP Paribas, a victory by each on Tuesday would make their Indian Wells matchup their second earliest meeting after Miami. Between Miami in 2004 and now, their meetings have been in quarterfinals, semifinals or finals.

Interestingly, as much as each has played in this Masters series event, if they got through Tuesday’s matches, it would mark only the third time they had faced each other in singles at Indian Wells. Federer won a semifinal in 2012; Nadal got a quarterfinal victory in ’13.

The best prospect to mess this up was Verdasco, a 33-year-old journeyman from Madrid. A noted, he and his friend Nadal have history.

In 2008, Nadal beat Federer in the Wimbledon final, in a five-set match that was generally hyped as the best match of any kind, anywhere, in recent history. The fact that it was a Wimbledon final boosted that opinion.

But many tennis experts now feel there was a better one, about six months later. That was Nadal and Verdasco, in the 2009 Australian Open semifinals.
It went five sets. It set a record at the time for length of match, 5 hours 14 minutes. It was Verdasco’s first major semifinal. It was Nadal’s first shot at a hard-court title. He had won four times at the French on clay and once at Wimbledon on grass. The word among tennis analysts then was that Nadal’s greatness would be limited to clay. His ’08 Wimbledon title would be an aberration.

Anytime they play, it’s magic, even when they are a bit off their game or under the weather. Roger-Rafa makes headlines, even in sports sections that now treat tennis like it’s junior varsity water polo.

“I still think about that a lot,” Verdasco admits.

That allowed Nadal to face Federer in the final, and that one went on and on, too, into the history book of tennis classics. Nadal won, 7-5, 3-6, 7-6 (3), 3-6, 6-2. He had played 110 games and four tiebreakers over the two matches, won them both and shattered the clay-court-player-only image.

Then, there was last year in Australia. Nadal and Verdasco went at it again. This time, it was in the first round, and this time, with 90 winners in a match that again went five sets and lasted 4 hours and 41 minutes, Verdasco won. Nadal had lost in a first round of a major only once before.

Nadal had no illusions that he was facing some Palooka Tuesday. But Verdasco yielded this time, 6-3, 7-5, and Nadal said afterward, with his delightful broken English in which he answers questions with questions: “I played a good match, No? I played two lousy games. That was it.”

He was asked the inevitable question about facing Federer, once again. What makes Roger so special, the reporter asked.

“We’ve done this twice before here,” Federer said courtside afterward. “I’ve lost more than I’ve won (against Nadal). It should be fun.”

“That’s why I came here,” he said, “to play against guys like Rafa. I’m very excited.

So are thousands of tennis fans holding tickets for today’s match.

Just like that, Indian Wells will have its classic: Not just Roger and Rafa, but a rematch of this year’s Australian Open final, won by Federer in, you guessed it, a grueling five-setter.

They only play best of three sets here, but expect it to still be grueling. It is, after all, Roger and Rafa.