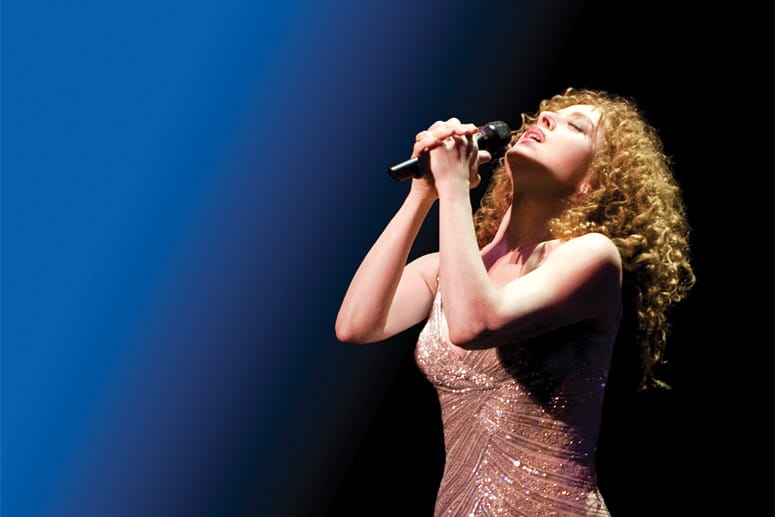 The two have been forever intertwined since Peters appeared in Sunday in the Park With George in 1983. Toward the end of that play, Peters sang Sondheim’s “Move On” and recognized that the notes and words struck a personal chord that would resonate for years.

“At first, I thought, ‘Oh, it’s a nice song’, then I started realizing what it meant and how people get stuck sometimes in their life and they are afraid to take any chances or do anything,” Peters says. “And you can’t live life like that. By the end of that show when I got to sing that song, it was such an emotional show that it was almost like meditating and a release to hold those notes and let go.”

Peters, a three-time Tony Award winner, will perform Feb. 19 at McCallum Theatre in Stepping Out for COD. The concert will benefit the College of the Desert Foundation, which funds scholarships and programs that assist students, faculty, college facilities, and more.

The Guide caught up with Peters recently to talk about her connection to Sondheim and what she has been working on lately.

What can audiences expect to hear during your performance at McCallum Theatre?
I do Rodgers and Hammerstein. I sing Sondheim, but I also sing, “When You Wish Upon a Star” and Peggy Lee’s “Fever.” I added “Send in the Clowns” recently to the show, which people are really enjoying a lot. Basically, we’re there in one room together to enjoy ourselves.

What is it about the connection between you and Stephen Sondheim’s songs? Do you feel like you were meant to sing them?
I know, it’s weird. I think it’s because he writes the music and the lyrics. He really says what he intends on saying so clearly, and I love his sentiments. I like to remind myself that “No One Is Alone,” “What Can You Lose?,” and “Children Will Listen” — all of those things are important to remind ourselves and important to hear.

What was the experience of taking Sondheim’s songs in a different direction recently with A Bed and a Chair on Broadway with Wynton Marsalis?
It was really interesting. It’s very hard to take existing material and turn it into a different type of story. I’m not a fan of that usually, but I think the storyline worked. You kind of go, ‘How could you do that to Steve’s songs?’ He loved seeing his things interpreted in a different way, even though he was so specific when he wrote it. It was great to be able to sing in front of him and do whatever I wanted (laughs). And he was like, ‘Go with it.’

Working on the TV show Smash sounds like it was a unique experience because you were able to sing, compared to other roles you have had on TV.
It was just wonderful. I loved doing that. People love music on TV. That’s why Glee is such a big hit. I think if there is a way to get more of that on TV, I think it would be smart.