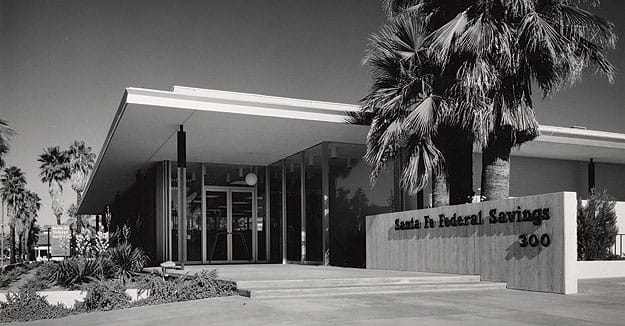 “The building’s elegant simplicity has always lifted my spirit far above the level of mere daily existence,” wrote Erik J. Williams about his father’s iconic edifice at the southeast corner of Palm Canyon Drive and Baristo Road in downtown Palm Springs. “For me, it is in itself a work of art.”

Standing in the former Santa Fe Federal Savings & Loan building, it’s easy to see his point. On a typically bright winter day in the Coachella Valley, the San Jacinto Mountains look like they’re illuminated from within. The cityscape and looming desert slopes are perfectly framed within floor-to-ceiling windows. From the building’s elevated perch, it floats above the street outside.

“It makes the mountains feel so close,” says Williams’ wife, Sidney, curator of architecture and design at Palm Springs Art Museum and former chair of Palm Springs Historic Site Preservation. “Stew talked about this being one of his favorite buildings. I think it’s because it is so pure. It has this architectural power to it.”

The public will be able to enter the 1960 building when it reopens in 2013 as the Edwards Harris Center for Architecture and Design — the centerpiece of the museum’s initiative to provide greater exhibition, program, and archive study space. It will be one of the only architecture and design museums in the United States housed in a vintage modern building.

Escrow closed on the $2.1 million property last June with money raised by the Edwards Harris Family Trust; fashion designer Trina Turk and her husband, photographer Jonathan Skow; and others. The building expands the museum’s architectural holdings, which include Albert Frey’s 1963 Frey House II, the glass box-like residence built into the mountainside above the museum designed by E. Stewart Williams in 1976.

The journey toward the Edwards Harris Center was a long one. E. Stewart Williams had designed several Southern California banks for Santa Fe Federal Savings & Loan before the Palm Springs property. In 1980, American Savings Bank bought the building, sold in 1997 to developer John Wessman for his offices. It briefly housed Palm Springs International Film Festival headquarters before becoming vacant in 2009. Sidney Williams and other preservationists fought to gain Class I Historic Site status after they learned that Wessman wanted to erect four-story, mixed-use buildings in the parking lot on the east and south sides of the building.

“The work, like the architect, is incredibly dignified and respectful of its context,” says Leo Marmol of Marmol Radziner, the firm restoring the building. “The building is so well designed and beautifully proportioned that the challenge, as with so many restoration projects we’ve been involved with, is to remain silent in our interventions and simply bring the power of Stew’s original design back to its full recognition.”

Marmol Radziner has restored other iconic Palm Springs midcentury properties, including Richard Neutra’s Kaufmann House, Erle Webster and Adrian Wilson’s Ship of the Desert, and Frey’s Raymond Loewy House. Here, the firm has removed office dividers to create one seamless space, removed carpeting to reveal the original terrazzo floor, and replaced dying trees with sustainable desert landscaping. Plans include adding an elevator; restoring the perimeter retaining walls; and replacing the movable, anodized aluminum screens that were stolen off the east-facing façade years ago. Glass panels will replace the modern ATM nook on the building’s southwest corner, as per original blueprints.

Williams’ forward-thinking vision was to create a commercial and community space. The building includes a basement with a kitchenette that was used as a meeting space for local organizations. This lower level will become a research library with cabinets for architectural blueprints. The building will also get a new air-conditioning system and rooftop solar panels. A museum store will be incorporated in and around the upstairs bank vault, which retains its original door.

Despite vagrants’ graffiti and previous tenants’ random curiosities in the downstairs storage rooms (a shuffleboard court, a movie screen painted on a wall, a cutout of James Dean standing alone in a corner), the building remains intact. The original walnut storage cabinets are unscathed, as are the cubed interior gates to the bank, single-paned windows and frames, can lighting, most of the acoustic ceiling tiles, even the 1960s airlock switch inside the vault. The 13,000-square-foot building is a step back in time for lovers of midcentury modern architecture, and the museum will host a reception in the building during Modernism Week this month.

Sidney Williams says her father-in-law would be pleased to see this space used in such a social fashion. “He was not interested in just individual structures, but in the overall sense of the community. He was very sensitive and had a big heart,” she says. “If you talk to anyone who knew him, they’ll speak about what a charming man he was. He was a real artist. He did fantastic watercolors in the ’30s, and he even won a prize from the National Watercolor Society. He was also a draftsman and did everything by hand.”

Marmol Radziner is restoring the building with the help of Williams’ original drawings and plans, as well as black-and-white pictures taken by Julius Shulman. No early color photographs of the building could be found. “These were not originally red columns,” Sidney Williams says, pointing to the steel supports. “We want to do a little scraping to find out the original color. Nobody recalls the actual color, but they all uniformly say it wasn’t red. It was probably taupe, which Stew used quite a bit.”

Marmol describes the history of Williams’ firm as “one of powerful, modern innovation.” As a case in point, Sidney Williams points out the drive-up teller window with its car-level buzzer. “That was a very forward-thinking idea for that time,” she says. “This was probably one of the first drive-up teller windows in California. We’re going to be replacing the original ribbed aluminum fascia on its windows. Stew and the other modernist architects were interested in materials that would endure the desert heat and climate. It has all lasted incredibly well.”

But where Williams (who passed away in 2005 at the age of 96) truly proved he was decades ahead of his time was in his environmental awareness and community planning. “He was a very early environmentalist, going around to civic groups in the desert and Inland Empire, talking about land planning and preserving the environment,” Sidney Williams recalls. “He was very conscious of overbuilding and the need for open space.”

The architect always designed buildings to complement their surroundings. In the case of the Santa Fe Federal Savings & Loan building, the surrounding southern area of downtown Palm Springs was already established as a bank district. “But he wanted to do a very modern, open glass pavilion instead,” Sidney Williams says. “This building is very low key, very transparent, very modern. It’s unlike most banks, which have columns and look sturdy. This building is contrary to most bank designs, even banks today.”

“The proposal was met with intense opposition from the downtown merchants association,” Erik Williams recalls. “They wished to retain the small village atmosphere.” The project that could have made Palm Springs a midcentury modern city never moved beyond the model stages. The Santa Fe Federal Savings & Loan building hints at what could have been and, in an ironic twist of fate, will soon become the celebratory center of the modernist masters.