So much art wants to move you. Lita Albuquerque’s art, on the other hand, wants to ground you, align you to the cosmos, and connect you to a world bigger and deeper than the one you know. “If you’re truly in the present moment — at this time, in this place, in this state, in this country, on this planet, in this universe — and can really project your mind that way, and then come back, you get a realistic perspective of how we’re moving through space,” says the Santa Monica–based painter, sculptor, and performance artist. “I’ve trained myself to continually think in terms of the present moment.”

Albuquerque’s art uses space and color to explore this connectedness. Her materials — in particular, her signature velvety, ultramarine-blue powder pigment — seduce viewers into an enlightening experience. Her studio works reference her large-scale environmental installations, which have unfolded in some of the most unlikely and extreme places, from the vast emptiness of the Mojave Desert to the Ross Ice Shelf of Antarctica.

“I get flashes,” she says. “I worked in Egypt, and one day I just got this flash of seeing the planet from outer space. It had nothing on it but gold-tipped pyramids aligned to the stars. I thought, ‘What an extraordinary image.’ ” The idea led her to an astrophysicist in Los Angeles who helped her develop a project, Stellar Axis: Antarctica (2006), at the South Pole. With the help of a National Science Foundation grant, she set out to create a mirror image of the sky at both poles, “so if you drew an imaginary line from star point to star point it would be as if a shaft of light was coming through the center of Earth.” In her constellation, the white ice stood in for the dark sky and 99 blue fiberglass spheres represented the bright stars. The following year, she completed Stellar Axis: North Pole. “Those kinds of ideas get in your body. It’s more of a sensation.” 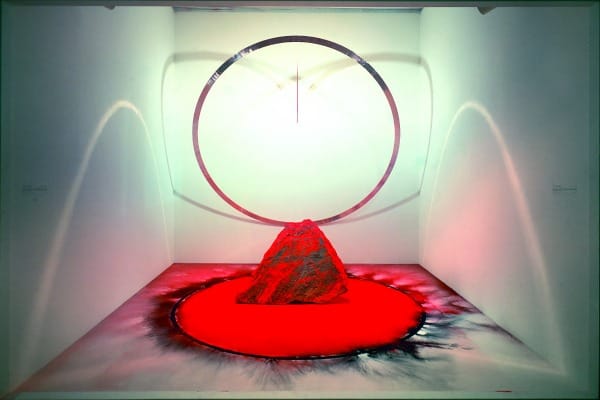 PHOTO COURTESY OF KOHN GALLERY
The Horizon Is the Place that Maintains the Memory, 1981.

That’s the reaction she hopes to inspire with her entry in Desert X, an exhibition of site-specific art installations opening Feb. 25 appearing across the valley from Palm Springs to the Salton Sea. Her installation appears through April 30 at Sunnylands Center & Gardens in Rancho Mirage. Although smaller in scale than Stellar Axis, this installation promises a big impact. She hints it “will be more of a poetic film and look almost like a campfire.” She’ll use “a lot of earth” to weave the ideas of a bonfire and storytelling into a resonating experience.

“What draws me to a project like Desert X is the mystery and multitude of interpretations of what the desert is,” she says. “I see the desert as a place of mirrors, a place of reflection in and out. It makes you go to an inner space. There are also other aspects: the power of nature and places like Sunnylands, as well as spiritual power, where you go out and come back with all sorts of insights. I’m interested in that happening in my work: [Viewers] start to think of themselves in relationships to the greater, looking inward where everything affects everything else.”

Before Desert X opens, Art Palm Springs (formerly Palm Springs Fine Art Fair) will honor Albuquerque with its Lifetime Achievement Award. The fair, set for Feb. 16–19 at the Palm Springs Convention Center, will include an exhibition of her paintings and sculpture organized by Peter Blake, who has represented Albuquerque for 15 years at his namesake Laguna Beach gallery and at art fairs around the country. “It’s so hard to imagine one person can yield all this work,” Blake says.

“I SEE THE DESERT AS A PLACE OF MIRRORS, A PLACE OF REFLECTION IN AND OUT. IT MAKES YOU GO TO AN INNER SPACE.”

“People usually come to her work from one perspective — the earth work, or her performances and videos, or paintings and sculpture. I’ve been watching all of this. This is someone who’s occupying all of these worlds simultaneously, and they’re commingling with each other. If you look at the work she has done, it all has so much power and meaning and thought and beauty.”

The artist says the thought of receiving the Lifetime Achievement Award in Palm Springs brings back memories. “I actually lived in Rancho Mirage when I was 16 and went to Palm Springs High School for a semester,” Albuquerque admits, noting she also received an award from the Palm Springs Art Museum.

Albuquerque was born in Southern California, but was raised in Tunisia, North Africa, where the starry sky and whitewashed architecture with brilliant blue doors had an enduring impact on her aesthetics. “We had a house near the Mediterranean and at night you’d go onto [the] veranda and see the stars all the way out to the horizon,” she says. “There was a lot of blue and gold. It was very visual and influential.” So was her time at UCLA, where she studied under Robert Irwin, an icon of Southern California’s Light and Space movement, and saw the work of Susan Kaiser Vogel, who inspired her to explore the unification of Earth and sky. Coming of age as an artist in the early 1970s, as land art and Light and Space were at their innovative peak, Albuquerque found her groove in a visual language that brings time and space into human scale. Encouraged by Irwin, she wondered what would happen if she went to the desert, found an all-white landscape, and placed a color there. For one of her first pigment-based ephemeral installations, in 1978, she placed rocks on a dry lake bed in the Mojave Desert in alignment with the stars. “When I was there I felt a relationship to elemental things: the sun, moon, and stars,” Albuquerque says. “That’s important, especially now when we’re not too connected. And it went on with more projects like that.” 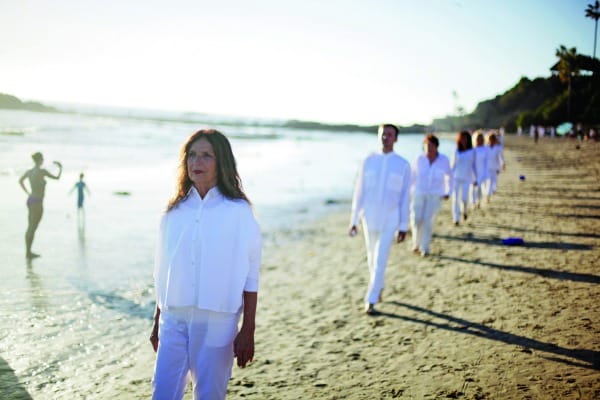 Her breakthrough work was the Washington Monument Project in 1980, which led to major international commissions, including an installment in the desert south of the Great Pyramids of Giza, where in 1996 she represented the United States at the Sixth International Cairo Biennale. Her Sol Star installation, realized in three tons of ultramarine pigment over the desert plateau, consisted of 99 circles drawn in a honeycomb-shaped pattern mirroring the constellations above it. She drew each circle in a different diameter to reflect the stars’ levels of brightness. Sol Star won the biennale’s top prize.