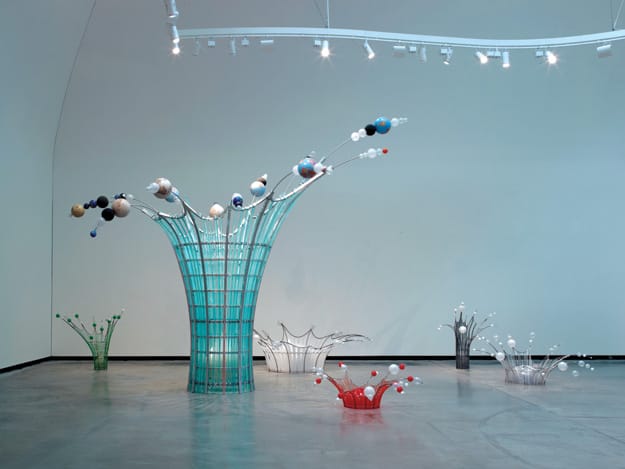 Form and color have long distinguished the daring and monumental sculptures of New York-based artist Dennis Oppenheim. For his new series of work, Splash Buildings, he reaches deep into his youth, when he lived in Berkeley and drove to San Francisco. “On the freeway in Emeryville, there was a Sherwin-Williams paint billboard that had paint going down a globe in neon,” he says. “That was a treat as a young person. That’s what I was thinking about [when developing Splash Buildings]. It’s a roadside attraction. Instead of neon, I’m using LED lights.”

Splash Buildings capture a moment in time: when a drop of water hits the ground, causing an upheaval of material, which forms the exterior of the structures. He calls them “event sculptures,” as the pieces reflect the result of an event: the downward motion of the drop with the upward action of color.

Models of the sculptures gained Oppenheim a commission of three 65-foot cylindrical slashes at Houston’s George Bush Intercontinental Airport. “It will be a phenomenal visual treat as people exit the airport,” the artist says. “Part of the splash arches over the expressway, and it’s totally animated with LED lights 24 hours a day.”

Royale Projects (75270 Highway 111, Indian Wells) will show three models (without lights) from the Splash Buildings series in an exhibition open through April. One of the “models” soars 15 feet high and hardly feels like a model at all.

Although Oppenheim executes the splash gestures in abstract fashion, viewers will recognize the dynamic action — and the conspicuous globes that appear suspended in air. Transcending so much galvanized steel, cast Fiberglas, acrylic, and globes lies an expression of simple idea — much like his Device to Root Out Evil (a transparent, upended church) and Burning Contract (a building set ablaze based on rolled paper); it’s signature Oppenheim.

The exhibition at Royale Projects includes a DVD presentation of monumental outdoor installations of Splash Buildings in a Roman amphitheater.