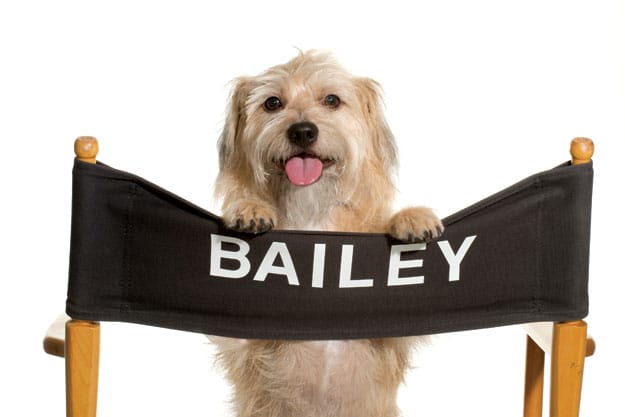 Bailey sniffs out his temporary digs and pads around the white interior with cautious interest. Winner of the Palm Springs Life/Pets on Parade Cutest Pet Photo Contest, the Jack Russell terrier mix is freshly groomed and preparing for his close-up.

The 2-year-old rescue dog begins his day at Puppy Luv, a salon in Palm Springs specializing in grooming the animal companions of local personalities and celebrities. Salon owner Donna Lopez puts the finishing touches on Bailey with a few final sweeps of the brush. Bailey has been a good boy throughout the pampering process, observes his owner, Rick Ketchem. “He even enjoyed the bath,” Lopez notes.

Perfectly coiffed, Bailey arrives at the studio. As a first-time model, he is a little nervous. But after some determined coaxing, several brief walks outside, and promises of tasty edibles, Bailey starts warming up to the idea of being the cover dog for Palm Springs Life.

Sherrill bears down on his camera, intent on capturing the perfect shot. He whistles and snaps his fingers, drawing Bailey’s focus toward the lens. Soon Bailey’s attention wanes and his ears drop.

“Bailey — walk?” Ketchem asks, hoping the dog’s second-favorite pastime stimulates the desired response. But Bailey’s on to him. He has heard that line several times in the last few hours.

“Bailey — walk?” Ketchem repeats, but with fresh enthusiasm, this time jingling Bailey’s leash. He’s standing over Sherrill, who is lying on the floor with his camera poised on Bailey, while Duplay captures the scene live for digital posterity. The dog’s head cocks and his ears go up.

“You’re a champ!” Duplay says to Bailey. “They’re going to talk about you for years!” Duplay points to a director’s chair with the name “Bailey” stamped across the back. “Check out this prop!” he says. “Wouldn’t it be great to get some shots of him in the chair?” A canine star is born.

Bailey’s life began modestly, as one of seven puppies born to an abandoned dog found tied to a tree in Desert Hot Springs. His luck turned when Ketchem selected him from the squirming litter. Even though Ketchem’s girlfriend, Sue Moore, said no more dogs, the blonde puppy’s quiet curiosity attracted Ketchem. “That’s what I look for,” the dog lover says.

Ketchem took the pup home, and Moore named him Bailey. A few weeks later, the couple’s neighbors adopted Bailey’s sister, Rosie. The siblings visit each other often, scurrying over a ramp connecting the neighbors’ yards.

As the poster pooch for this year’s Pets on Parade Awards Luncheon, Bailey represents hope for desert animals in need. The contest promoted last month’s event, which raised funds for veterinary care costs for the Humane Society of the Desert (www.orphanpet.com) and Pegasus Riding Academy for the Handicapped (www.pegasusridingacademy.org), which rescues horses in addition to providing equine therapy.

“I’m happy that the little terrier rescue was the winner,” Humane Society President Malinda Bustos says. “It’s exciting for us, because it proves that adoption is the option in finding the perfect animal companion.”