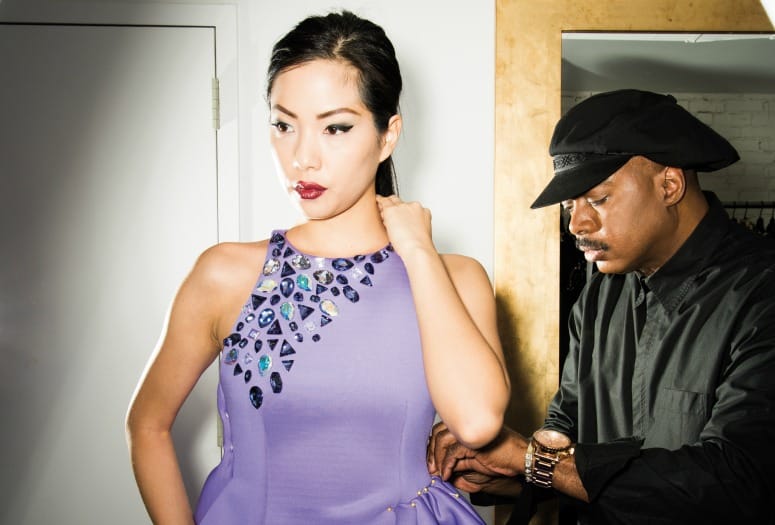 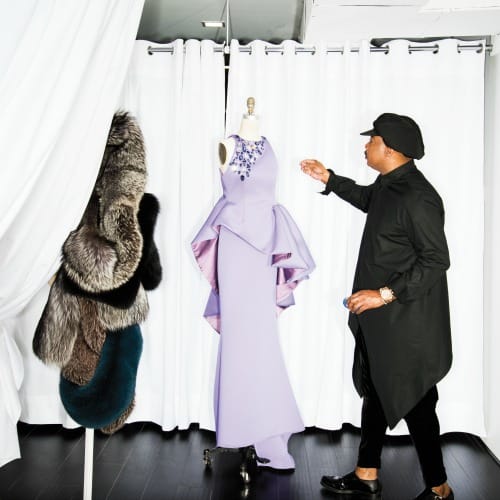 Couturier CD Greene knows glamour. His made-to-measure gowns accentuate the female form like nobody’s business with a keen attention to embellishment. Each piece of ornamentation is selected with a client in mind, so a garment never outshines its wearer. See Green’s collection when it walks the runway this month as the closing show of Fashion Week El Paseo. 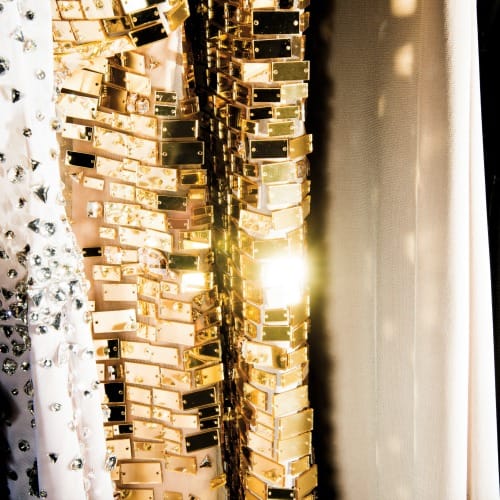 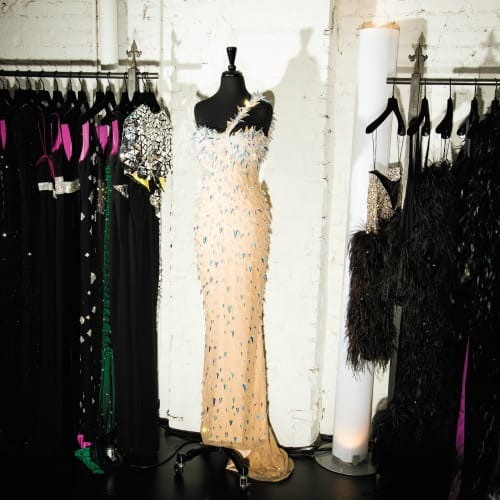 Decades ago, when CD Greene was majoring in painting and sculpture at the Art Institute of Chicago, he would sneak unnoticed into his friends’ fashion design classes, reluctant to reveal his nascent affinity for fabric and tailoring to his peers — or his parents. But there is nothing shy about the wearable works of art he went on to create.

Today, Greene has scaled the highest peaks of the fashion industry. He is an old-school artisan and a modern-day couturier whose exclusive collection of evening wear hangs on the posh fifth floor of Manhattan’s Bergdorf Goodman department store. This month, he will be the headlining designer on the eighth and final night of Fashion Week El Paseo, a high-style extravaganza whose production values equal or exceed that of New York Fashion Week, and where crowds of up to 14,000 gather in the desert to celebrate — and to shop. (For those with formal events coming up, Greene’s runway presentation will be followed by a trunk show where you can purchase his pieces.)

Greene’s unabashedly glamorous, crystal-encrusted gowns have made him a red carpet favorite and a top seller on Bergdorf’s elite roster of custom designers. It’s a popularity he’s likely to duplicate with well-heeled customers in the Coachella Valley. After all, his are the kinds of dresses that get New York socialites followed into the ladies’ room at uptown charity galas by fellow fashionistas demanding to know the label (Greene’s phone number is often passed around this way). His glittering, curve-conscious silhouettes are similarly sought by stylists for the likes of Beyoncé, Mariah Carey, Christina Aguilera, and Tina Turner to make sure they stand out. “Tina Turner’s stylist came to me when he was preparing for her Wildest Dreams tour” of concerts in 1996, Greene recalls. “He said he had a lot of clothes she was wearing onstage, but she was disappearing. He needed something that was going to draw attention so that when she came out it was a ‘wow’ moment.” Greene certainly delivered. Turner’s dress — a white net mini accented with cascading crystals and expertly cut to show off her legendary legs — is now prominently on display at New York City’s Fashion Institute of Technology in its celebrated Black Fashion Designers exhibition, a show praised by The New York Times. When visionary costume designer Patricia Field was working on the megahit Sex and the City movie and needed a showstopping number for Kim Cattrall’s Samantha to wear in the final scene, she also selected a design by Greene. “I remember sitting on a plane and everybody was watching the Sex and the City movie,” he says. “It was on every monitor, and all of a sudden I see like 30 little pictures of Samantha walking in my mirrored dress. It was phenomenal and very surreal. But that kind of thing happens all the time.”

Indeed, Greene’s life story reads like a series of dream-come-true moments. But it began humbly, in West Chesterfield, Illinois, with a “very traditional” family life. “I had a wonderful, beautiful childhood, with church picnics every Sunday and all the holidays at my grandmother’s,” says Greene. His father worked as a printer for a local factory; his mom was a homemaker, “which my father preferred. He wanted the old-fashioned kind of thing.” The second of four children, “I was that typical middle kid who wanted all the attention. I had to take that extra step to make sure they noticed me more than anybody.”

His mother did take note of his artistic side. “She was very supportive of me. She always believed that I had something very special and that it would develop itself into something.” It took some time, however, to convince his dad. “After I got into a fine arts college, I think he understood that I wasn’t going to be unemployed forever and that I was going to be able to use my talent to create a living. I think that’s what he was most concerned about,” Greene reflects. “Starving artists who live in their mom’s basement their whole lives, asking for money. He really wanted us to be independent and to make our own way.” 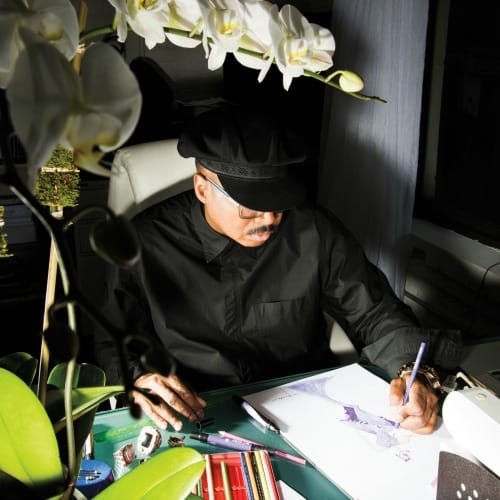 “After I got into a fine arts college, I think [my father] understood that I wasn’t going to be unemloyed forever and that I was going to be able to use my talent to create a living. I think that’s what he was most concerned about,” Greene reflects. “Starving artists who live in their mom’s basement their whole lives, asking for money. He really wanted us to be independent and to make our own way.” 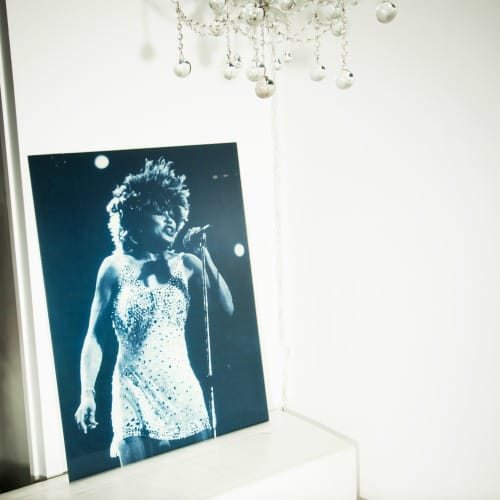 “Tina Turner’s sylist came to me,” Greene recalls. “He needed something that was going to draw attention so that when she came out it was a ‘wow’ moment.” Greene certainly delivered. Turner’s dress – a white net mini accented with cascading crystals and expertly cut to show off her legendary legs – is now prominently on display at New York City’s Fashion Institute of Technology.

His father needn’t have worried. Greene found success early and often. After designing a menswear collection for Marshall Field’s in Chicago, he moved to New York with zero professional connections, only want ads from Women’s Wear Daily. An early meeting with Tommy Hilfiger was encouraging (“He said, ‘I like you, you’re really talented,’ ” says Greene) and he eventually found work with a jeans manufacturer and then a sweater company. On the side, he began making evening gowns for friends, refining his signature look: matte jersey dresses, carefully contoured to fit close to the body and adorned with edgy, often architectural arrangements of Swarovski crystals, rhinestones, and mirrors. Word of mouth quickly spread up and down Manhattan’s tonier avenues, reaching the radar of the buyers at Bergdorf’s, and so it began.

“Nothing fits like a CD Greene gown. Everyone who tries one on looks amazing,” says Elizabeth von der Goltz, Bergdorf’s senior vice president of fine apparel. “His artistry in tailoring jersey accentuates all of a female body’s best parts and hides the worst. And no one else has his bold sense of embellishment. Heads turn when a woman enters any room in one of CD’s pieces. Yet she always looks elegant and sophisticated — not an easy balance to achieve.”

One secret to Greene’s magic is that every dress is made to measure. If a client is 5-foot-3 and a size 2, the baubles on her gown are scaled to her proportions and can be subdued to suit her personality. So when von der Goltz describes his embroidered motifs as “over-the-top drama,” she’s talking superlatively; his refined and customized handiwork will always balance out the bling. This is all due to Greene’s impeccable eye and hands-on craftsmanship. “The ornamentation never overpowers the woman who wears it,” says Greene.

Truth be told, the women who wear Greene’s gowns are plenty powerful on their own. Greene’s atelier is on Fifth Avenue and 55th Street, a hop, skip, and a jump from Bergdorf’s, even in Manolos. When a Bergdorf client — a princess from the Middle East or a celebrity like Alicia Keys, Christie Brinkley, or Courtney Love — expresses interest in one of his dresses, he often comes over to the store and immediately begins the fitting process. A typical gown requires three fittings and takes three weeks to make from start to finish, as most of the crystal embroidery is done in-house by Greene and his team. “Whether it’s a member of the royal family spending half a million dollars or a mother of the bride who buys one dress, I work with every client,” adds Greene. “And I treat the customer of one dress as well as I do the one who’s buying five. I still want to make them feel special.

“I have so many return clients who have a closetful of my dresses, and I’m like, ‘Why do you want another?!’ ” he says. “I think they love the process. They feel comfortable and beautiful. And that’s the biggest compliment ever. It just makes me proud and happy and inspires me to want to create even better things.”

Greene’s creativity is never more evident than when his designs appear in Bergdorf’s awe-inspiring holiday windows. Each is a visual feast, like the jaw-dropping 2014 display with one of his translucent metallic jumpsuits on a trumpet-playing mannequin against a backdrop of thousands of silver horns. Equally stunning is the 2016 diorama featuring another jumpsuit, emerald green and thoroughly sequined, on a mannequin atop a tightrope over a lush tropical lagoon. “I just stand in front of the windows and listen to the compliments,” Greene says with evident pride. 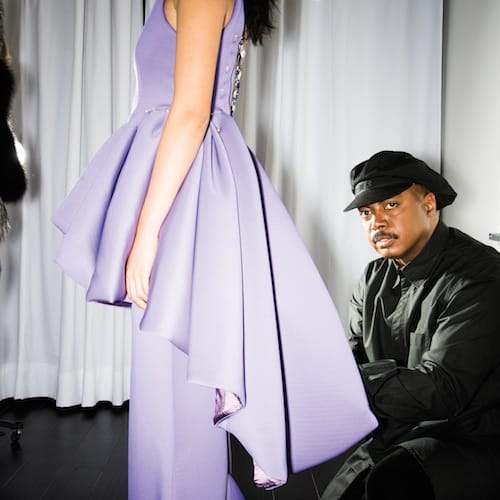 Greene’s parents were also jazzed by the windows, which they got a chance to see before they passed away in recent years. “I love the fact that I had become, in their eyes, a success,” he says. “My dad did say to me, ‘You know I’m very proud of you because you really love what you do.’ And I said, ‘I truly do.’ That was really cool.”

Of course, Bergdorf’s is pretty happy too: “I am probably the highest-retailing couture vendor in the store, consecutively,” says Greene, marveling. “It’s just an awesome, awesome feeling. I don’t think about it that much because it’s just something that you do. You just take it with a grain of salt and keep going. You can’t get obsessed [with sales figures]. You’ve got to keep your feet on the ground, keep yourself humble and grateful and gracious.”

Down to earth — and yet his work, thankfully, keeps pushing against the bounds of fantasy. In an era when athleisure is breaking sales records, Kanye West’s sweatshirt minimalism is cutting-edge, and yoga pants outsell jeans, Greene’s gowns hark back to a more romantic time. So who inspires him — which fashion icon, past or present — when he’s dreaming up his next vamp on the past? Josephine Baker, he says without missing a beat. He collects vintage photos of the St. Louis–born showgirl turned Parisian performance sensation, and he knows her story well. Recalling the film Zou Zou (1934), “I love that one scene where she’s on a swing in a birdcage with these beautiful white feathers and crystals decorating her hair and her outfit,” he says. “When you see things like that, they stay in your mind and affect you forever.”

Vividly, brilliantly, Greene’s creations make the case for more is more — that self-decoration lends life a note of grace. “There’s definitely something to be said for glamour,” he says. “American women love the simplicity of day clothes. Some of my clients certainly do wear yoga pants and they look very fashionable in them. But the thing I love most is that my client says, ‘OK, I have my day look. Now it’s time for me to step out of that comfort zone. I need a fabulous dress.’ ” 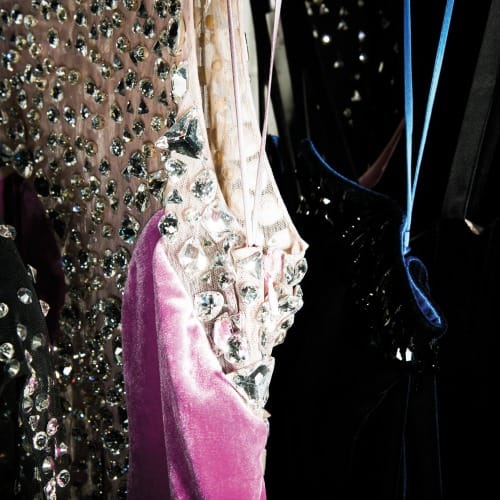