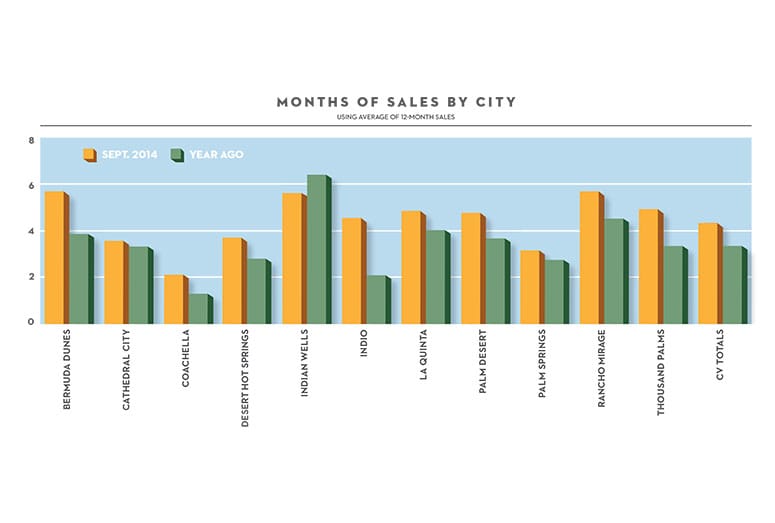 Housing inventory in the Coachella Valley fell below 3,000 units to a low 2,924 on Sept. 1. Three years ago, it was close to 5,000 units. This is surprising, considering the high price gains over the past two years. One would think that higher prices might bring out more sellers: homeowners waiting for higher prices or early investors wanting to make large profits. But neither is occurring. We see this low inventory for each city in an indicator called “months of sales.”

Months of sales is calculated by dividing inventory by average sales. Theory considers ratios between four and six months as a sign of a healthy market, not one overbalanced by too much supply. When we measure months of sales in the valley’s nine cities, we see that all are in healthy ranges (see chart). Every city has a ratio under six months. While current ratios are slightly higher than last year, last year was abnormally low.

The low readings for Rancho Mirage and Indian Wells are especially noteworthy, since their ratios are typically higher than six months. This is encouraging, as higher-priced homes did not participate in the initial stages of the recovery two years ago; it was the lower-priced homes that drove it. This points to a continuing price recovery in the higher-priced regions of the valley.

However, having low inventory is a double-edged sword. While it is conducive to keeping home prices up, it also means buyers don’t have many choices. This limits demand. We see this in the decline in home sales. Sales are down 14 percent from the same time last year. This is the result of not only low inventories but also fewer investors willing to speculate and fewer home buyers being able to qualify at current higher prices.

The Coachella Valley market is composed of two distinct markets. How low inventory affects each is unique.

The first is the local market, which is primarily driven by valley residents who work and raise their families here. As you would expect, this market is driven by incomes and interest rates and is very dependent on the state of the local economy.

The second is the retiree migration and second-home buyer markets. These are not affected or driven by the local economy but rather by the state of outside economies and levels of personal wealth.

That the American economy is becoming polarized — some people are doing better, some worse — shows itself in these two markets. Since 2000, real incomes are down 10 to 15 percent, so income-driven housing activity is suffering. However, housing markets driven by net worth (stock and IRA values) are doing much better.

This can be seen in the table of city prices. The job-dependent and local markets of Indio, Coachella, and Cathedral City have recovered but are still far from their all-time highs of 2006. However, the migration and second-home markets of Palm Springs, Indian Wells, and Palm Desert are stronger and closer to their all-time peaks. Until incomes rise, we expect this polarizing trend to probably continue.