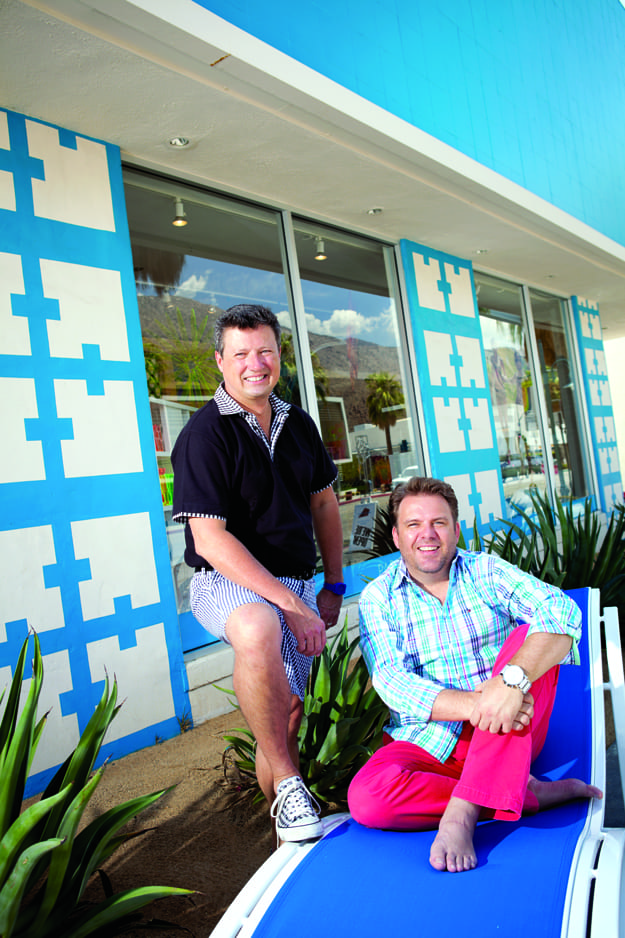 Even if you have never heard of Larry Abel and Raymond McCallister, chances are you have either shopped at one of their businesses, or attended one of the functions they either personally directed or created the main exhibit.

Within the last few months, they acquired the Party Store on Indian Canyon Drive in Palm Springs.

Their store on Palm Canyon Drive in the Uptown Design District, aptly named Raymond/Lawrence, just celebrated its first anniversary. The store actually houses several businesses under one roof called pop-up shops. The concept gives emerging businesses a chance to do a test-run of sorts to see if they can become free-standing enterprises.

Two of those businesses, Pelgo Gifts and Made 2 Measure Fashion, recently graduated from Abel/McCallister and are opening up shop in downtown Palm Springs.

Last year, Abel and McCallister also created a company called Socialize Palm Springs, which tackles events ranging from house-warming parties to charitable and corporate events. “Evening Under the Stars” with Cyndi Lauper, which benefits the AIDS Assistance Program on May 11 in Palm Springs, is one of those events.

That list doesn’t account for the 70 percent of their business in New York City where Abel and McCallister have a staffed office, according to Abel.

Their rapid growth has not gone unnoticed. BizBash, the leading trade media for event and meeting organizers and event marketers, named Abel/McCallister to its first “Top 35 Event Designers” list.

Their lives first intersected in the Chicago area in 2003 and they moved to Los Angeles in 2006. Since arriving in the desert initially as part-time residents in 2009, they now spend most of the week in Palm Springs before retreating to Los Angeles for the weekend.

Palm Springs Life caught up with the couple recently to talk about their fast-paced lives.

So how long have you been partnered?
Larry: “It’s been 10 years.”

And how do you find mixing business with pleasure?
Larry: “Depends which day you ask (laughter).”
Raymond: “And which hour of the day it is (more laughter).”

How do you make it work?
Larry: “We have two different skill sets and they overlap really well. But he’s better at some things than I am and vice-versa. Across the business we can do each other’s job. I just don’t want to. The part that overlaps is the magic part. It took us a year or two to get a comfort level with each other’s skill set. Now we just kind of stay out of each other’s way.”
Raymond: “We met in December 2003. I started this business in January 2004, and he joined me in February 2004. Everyone thought we were out of our minds!”

What brought you to Palm Springs?
Larry: “We lived in LA for three years and had never been over here. We decided to come out here with friends. We thought, ‘This is really cool’. Then we did an event out here in Palm Desert for Golfsmith. We started looking at houses and thought we should buy now, rent it out, and by the time we retire it will be paid for. That idea didn’t last very long.”

How much of the exhibits you create is your own work?
Larry: “We design and make all of our own props. In LA and NY, we make our own acrylic, we make our own furniture, upholstery, woodworking, all the fixtures you see in our Palm Springs store we made ourselves.”

How does acquiring the Party Lab fit into your business plan?
Larry: “It kind of completes the circle of events. We love that place. We shopped there from Day One when we got here.”
Raymond: “(previous owner Vicki French) has a great team of employees over there. It’s kind of like a family. When you go in there, you feel like you are part of that. The trend for retail is going back to the Mom & Pop shop. Knowing the merchant and the customer service that comes with that.”

Can you have a dinner conversation without talking about business?
Raymond: “I would like to say yes, but no. Everything comes back to the business. We both sit down to dinner, and say, ‘We’re not going to talk about business’, and then organically it gets there.”
Larry: “Raymond also designs homes. Anywhere we go, we can see something that would be a great idea for a party, or a great pattern for so and so . It’s hard to turn it off. When I had a real job, I did this stuff as a hobby. So now that I’m doing it as my work, it’s like my hobby full-time. This is the best job in the world when you love what you do.”