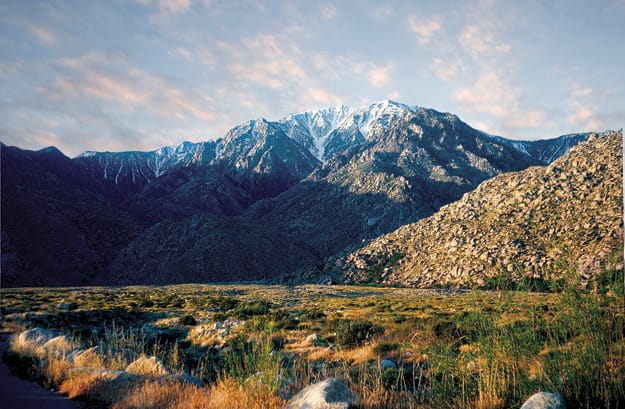 If you’re training for Denali, North America’s hunkiest mountain, what’s a little jaunt up the North Face of Palm Springs’ Mount San Jacinto? It’s got to be a snap. That’s what Drew Hillery thought when he decided to make a practice climb on San Jacinto. The 24-year-old Redondo Beach athlete was in the best shape of his life and had completed major ascents such as Washington’s Mount Rainier.

Huge waterfalls on the North Face forced him to detour. Eventually his food ran low. He lost his way and slowed his pace in deep snow. On day four of what should have been a two-day excursion, Hillery camped at 8,700 feet and was down to his last Snickers and Skittles. He awakened to the sound of helicopter rotors reverberating against the gray granite. His trip ended — as have many other North Face treks — with the subdued conqueror dangling in a litter beneath a helicopter.

Hillery did go on to climb Mt. Denali, where he entertained fellow climbers with tales of San Jacinto. “I completely underestimated this mountain,” he says.

That’s true of so many who pass the North Face as they drive Highway 111 between Palm Springs and Interstate 10. Above the village of Snow Creek rises the boldest escarpment in Southern California, an in-your-face wall of granite heaving up to 10,834 feet and etched with water-falls. For many months of the year, a distinct Y of snow near the top marks the climber’s chute to the summit.

“It’s an urban summit, yet it has all the challenges of a great mountain anywhere in the world,” says Robert Speik, a veteran of 300 summits in the United States and Europe. The North Face represents one of the longest alpine ascents in the lower 48. While big climbs in the Cascades call for a 5,000-foot elevation gain, San Jacinto tests climbers with a grueling 10,000-foot gain.

As befits a big mountain, it has a formidable reputation. Writing to her mother after her first ascent in 1938, Ruth Dyar Mendenhall — one of the first women climbers in the United States — said the North Face was “notorious as a place where people take awful beatings.” The punishments include collapsing snow caves with rivers running underneath, avalanches, falling rock, extreme cold, and unearthly fatigue.

Legendary, too, are the rattlesnakes (Speik once encountered 30 in one small area) and a gnarly thicket of chaparral that one adventurer dubbed “The Psycho Forest.” Helicopter pilots and rescue crews tell stories of North Face missions. In one oft-told tragedy, a Boy Scout fell to his death where Falls Creek and Snow Creek come together above 600-foot waterfalls.

In a graphic online account, J.K. Vawter wrote about the time his father-in-law, experienced mountaineer Bill Davenport, made it to the 8,300-foot level when he was blown over by a gust of wind and slid down an ice chute. When Vawter got to him, “His head, a bloody pulp, hung limply from his shoulders and blood dripped into his lap.” After a helicopter rescue, Davenport eventually recovered.

It’s impossible to say who first scaled the North Face, but we do know (thanks to John Robinson and his book The San Jacintos) that in 1896 Bertrand Wentworth and a friend took the train to Whitewater, then headed on foot for Snow Creek. They never made the summit; but for four days, they explored the canyons: “each rocky and wild beyond description … each effectively blocking the climber.”

A few years later, writer George Wharton James made it to the top. He described walking through ice tunnels formed by flowing water; the temperature inside was freezing, yet he could gaze out on ridges baking in 100 degrees. “The pines sing joyously above us,” he wrote. “As we see the bare ledges of the granite above, capped by the snow-streaked summit, we cry Excelsior!”

The Great Depression sparked a hiking boom that continued into the 1960s, as people sought cheap outdoor entertainment. Sierra Club membership soared, and accounts of San Jacinto climbs in the club’s newsletter multiplied.

That was also the era of dashing, itinerant climbers such as Norman Clyde, the famous Eastern Sierra mountaineer who made more than 100 first ascents, and Royal Robbins, the king of Yosemite climbers. Both scaled San Jacinto’s North Face, Robbins as a young Boy Scout. Clyde was especially impressed by the boulder fields, which surpassed anything he’d seen in the Sierras. It was a “most chaotic confusion,” he wrote in a 1932 article in AAA’s Touring Topics magazine. With Clyde’s endorsement, the Palm Springs peak became a must-do for serious mountaineers.

Jim Fairchild’s Boy Scout Troop 13 made a ritual of tackling the North Face. Fairchild, who died last February, founded the Riverside Mountain Rescue Unit, still in operation today. In 1952, Bob Watkins was teaching survival at March Air Force Base when he began taking Air Force trainees up the North Face. He went on to become the first president of the Riverside rescue team.

Mountain climbing was trendy again in the ’70s, with the Los Angeles Sierra Club alone training 1,000 new mountaineers a year. Speik, chair of the club’s mountaineering training committee, tackled the North Face in 1974. He was prepared for winter weather, wearing wool knickers and a wool shirt; but the desert sun turned the alpine climb into a sweat bath. Speik, now 80, begged permission of women climbers in his group to summit in his boxer shorts.

On another climb, unexpected cold overtook Speik’s team. Stumbling and mumbling, some suffered the first stages of hypothermia. On the summit, the temperature was minus-10 degrees with 40 mph winds; meanwhile, on the desert floor, the Santa Anas blew under a hot sun. A change in the weather can turn the North Face into a serious technical climb in minutes, Speik says.

Property at the base of San Jacinto is off-limits to protect the purity of the domestic water supply (see sidebar). The closure prohibits climbers from accessing the face without serious bushwhacking that adds hours to the trip. In earlier years, the agency often granted permission to climbers. But tighter regulations on water quality led to closing all access, says Mike Bergan, facilities and safety officer for the agency.

The man tasked with keeping climbers off the classic route for the last 30 years was Woody Adams, who lived with his family in a house at the base of the North Face. Adams relied on his fierce reputation (“Don’t go up there or he’ll shoot you,” hikers told each other) and a succession of big dogs — Bubba, Saber, and Bear — to keep people out of the area.

Carl Garczynski, a 73-year-old retired meteorologist from Indio and Mount Everest veteran, dodged Adams many times during 27 ascents — and was caught a few. He recalls once hiding in the brush while Woody shouted, “Carl, I know you’re in there!”

In winters with heavy snowfall, Garczynski has climbed the North Face as many as three times. “If you climb without the snow, it’s extremely dangerous,” he says. Though some climbers have successfully made the summit when the route is dry, most say it’s safest when the chute is full of snow.

“The Y is so steep that when you’re up there you can’t see the top,” Garczynski adds.

Aside from the off-limits restriction, the climb requires technical mountain skills, including advanced route finding and experience on ice and snow. The challenges can be life changing.

After his encounter with Mount San Jacinto, Drew Hillery wrote in his blog (www.hillnbatt.com), “I haven’t felt right since I left that summit. I can’t sleep, my appetite isn’t right, and I feel like I need to get back to San Jacinto immediately.”