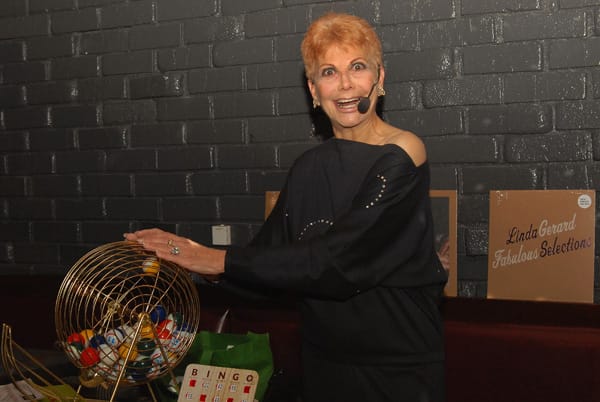 Gerard, who is battling lung cancer,  has been at the Ace Hotel & Swim Club since just after it opened in 2009. Gerard’s career has had an unexpected boom since then including the release of her own compilation album, "Fabulous Selections".

Ace Hotel will take donations at the door for raffle tickets — winners score cool prizes like Gerard's album. Book a room March 25, with code FABULOUS to score 25 percent off the stay and Ace will waive the resort fee and donate all proceeds from the room to Gerard.

Ace Hotel will also donate all sales from Gerard's record, Sissy Bingo T-shirts as well as a portion of proceeds at the bar that evening to support her.

Gerard has been serenading and scandalizing captivated crowds for more than 50 years. Her show-stopping cabaret performances have headlined from Broadway to the Copa Cabana to London, Sydney and points between. She made more than 100 appearances as Fanny Brice in the legendary original run of "Funny Girl" when Barbra Streisand was under the weather — a role that few actresses have reprised. Her original one-woman show, "Ziegfeld's Fanny," was featured in the Palm Springs Follies and for a 16-week run at the Lawrence Welk Theatre in Escondido.

In the late 1980s and early '90s, Gerard operated and performed in her own nightclub cabaret, "The Rose Tattoo", in West Hollywood. Gerard self-identifies as an OWL — an Older, Wiser Lesbian — and she represents the flamboyance and self-love that are trademarks of lesbian and gay culture. She deploys her rapturous vocal stylings, incredible style and vaudevillian antics on a packed house every Monday night at the Ace where she hosts Sissy Bingo.