The main entrance on the east side of the building will focus on creating an indoor-outdoor feel and will feature an outdoor food court.
RENDERINGS COURTESY ACRISURE ARENA

Since construction began in June 2021, you’ve likely driven by Acrisure Arena and viewed the immense structure rising from ground level on the north side of Interstate 10, just off the Cook Street exit. Or maybe you’ve seen the renderings that depict people milling in and out of the multipurpose venue.

It wasn't that long ago that the arena was planned to be developed in downtown Palm Springs as part of a partnership with the Agua Caliente Band of Cahuilla Indians. However, when issues like parking and squeezing the arena next to a residential area became problematic, the H.N. and Frances C. Berger Foundation stepped in and offered a parcel of land by Interstate 10.

In less than three weeks, fans will gain their first real look inside Acrisure Arena when comedians Dave Chappelle and Chris Rock entertain in the round (Dec. 14), followed by The Doobie Brothers (Dec. 15), Grupo Firme (Dec. 16), and then the Coachella Valley Firebirds’ first official home hockey game (Dec. 18). 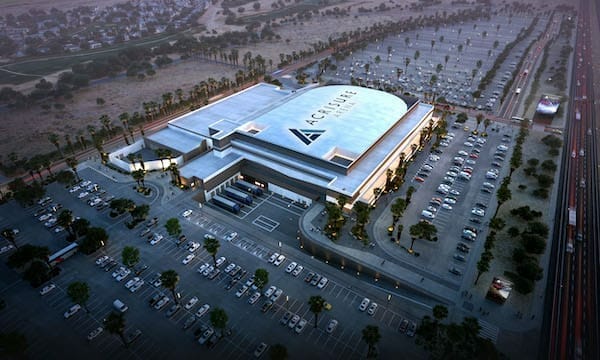 This aerial rendering shows 3,000 parking spaces including 50o for VIP.
John Bolton, senior vice president of entertainment and general manager of the arena, has decades of experience around venues like Acrisure Arena. In fact, he’s helping the parent company, Oak View Group, develop the grand opening and entertainment plans for eight new arena projects. He’s seen Acrisure Arena in Palm Desert go from an architect’s concept to reality, and he likes what he sees.

“Some of the interior spaces are even better than I thought,” Bolton says. “Being in the bowl [the main seating area], you really understand how wonderful this is going to be from an artist’s perspective and a fan perspective. Just knowing that you’re going to be so close to the action, so close to the artist when they’re playing based on that basically one lower bowl design, I think is really, really incredible.

“I’m really impressed with all of the work on the exterior of the building and how it fits in with the landscape around the facility as well, and the beautiful mountains that are there. I think it fits well from that perspective and also from a color perspective, and I think our friends at the Berger Foundation have done a really amazing job in all the parking lots and the landscaping that's coming on board as it relates to that part of the facility as well.”

In his conversation with Palm Springs Life, Bolton addresses many of the facets of the fan experience, and why there is as much attention being paid to what goes on outside the arena as there is inside. Here are 10 things to know about Acrisure Arena. 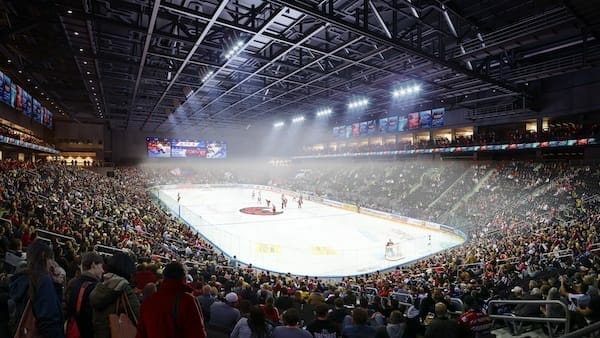 Hockey drove this arena to Greater Palm Springs where the Coachella Valley Firebirds will play home games through mid-April.

There will be 500 VIP parking spots on the west end of the arena and 2,500 spaces around the south and east ends. If needed, there are 1,000 additional spaces available at nearby Xavier Prep High School with shuttle service to the arena. Kiosks at the arena will allow you to pay after you park, so you won't be held up by an attendant asking for payment.

Using Patriot One’s SmartGateway, fans will walk through screening areas that detect concealed guns, knives, and other related threat objects, giving customers a green arrow to proceed through or a red warning to staff that shows where the detected threat object is located on the customer. “We think this frictionless, smart walk-through system makes it really easy for people to enter,” Bolton says.

All tickets are digital and sent to your cell phone. You won't need a printout, a screenshot, or any other method to get in. The barcode is scanned on your mobile ticket to gain access to the event.

Just for the Holidays

You’ll likely see the 54-foot Christmas tree from the freeway that sits by the main entrance. 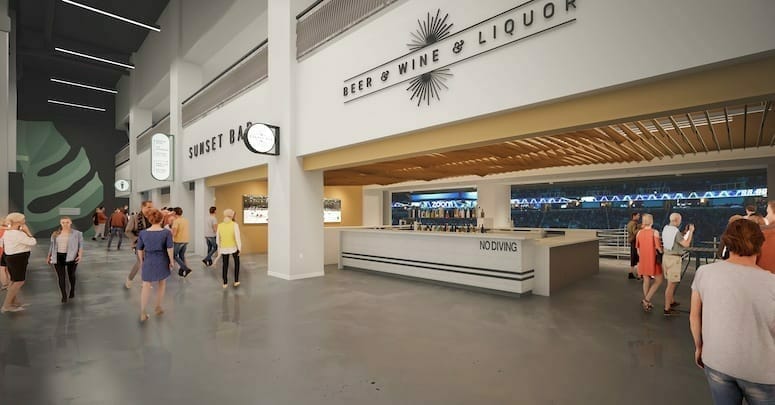 Before you even step into the arena, there will be food court area by the main entrance that will include five restaurants. The specific restaurants will be named this week, Bolton says. “Obviously we’re taking advantage of the weather and extending our indoor-outdoor [offerings],” he adds.

Acrisure Arena's capacity is 11,000, with roughly 10,000 seats for hockey games. Twenty VIP suites surround the lower bowl seating area. “It’s pretty clear to me that there's not a bad seat in the house,” Bolton says. “You’re entering at ground level and then going down to your seat.”

One seating area to consider: The very back row of seats is separated by a counter, where the attendee can plant a drink. The seating is similar to a bar seat, but it allows for more space between you and the person next to you when compared to regular arena seating.

Following the Dec. 14 opening night stand-up show, The Doobie Brothers will be the first band to play in the arena on Dec. 15, followed by Grupo Firme on Dec. 16 and Maroon 5 on Dec. 31. Acoustic technology has changed dramatically over the years, and Acrisure Arena is taking full advantage of that. Workers installed 10,000 square feet of acoustic lapendary panels, Bolton says.

“The fact that we don’t have a very high elevated upper bowl, where sound bounces off and then comes back down, will create a much better sound overall for our events. The goal is to make sure the sound system is really awesome. That plays a part into people’s enjoyment.” 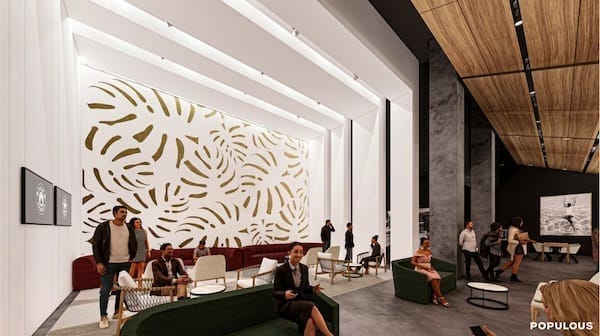 At the west end of the arena, a giant screen will broadcast the action during hockey games and also be utilized during musical and other live performances. In addition, a wraparound ribbon screen will surround the bowl seating, and many of the concession areas will have TVs to keep track of the action.

There is a special room located in the arena’s lower level where Chairman’s Club members can hang out, complete with comfy lounge furniture, bar and food offerings, and plenty of TVs to view the event.

Arena with a View

Check out the north and south bars. They are open-space areas that overlook the arena, offering dramatic views during hockey games. (Though they might not be as good during concerts, since the bars are parallel to the stage.)

A community Iceplex is poised to debut in late December, offering the public a chance to enjoy the same rink that the Coachella Valley Firebirds will use for practice. Daily public skating opportunities range from open skating sessions to adult/junior hockey leagues and theme nights.

“I think people haven't totally grasped that 360-day operation that’s under the same roof,” Bolton says. “As we grow and we all go through that first six months, I think that’ll be one of the most pleasant, interesting things that people probably haven't quite realized yet.” 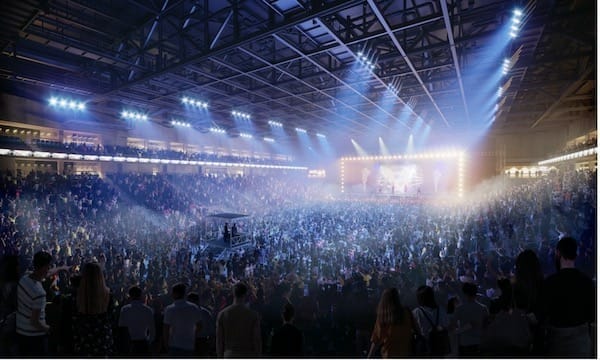 And in case you were wondering, there are three Zambonis on property to keep the ice skate-ready.

Six months from now, it’s safe to say many of these areas will be tweaked and adjusted as more shows are held at the arena.

“We’ll be constantly looking at that and making sure that everyone has a good experience," Bolton says. "If there are things that we can change to make better, or things that we haven’t recognized or been able to predict, we have the ability to go in and make those tweaks and changes to continue to improve the operations and really build upon our opening here in a couple weeks."