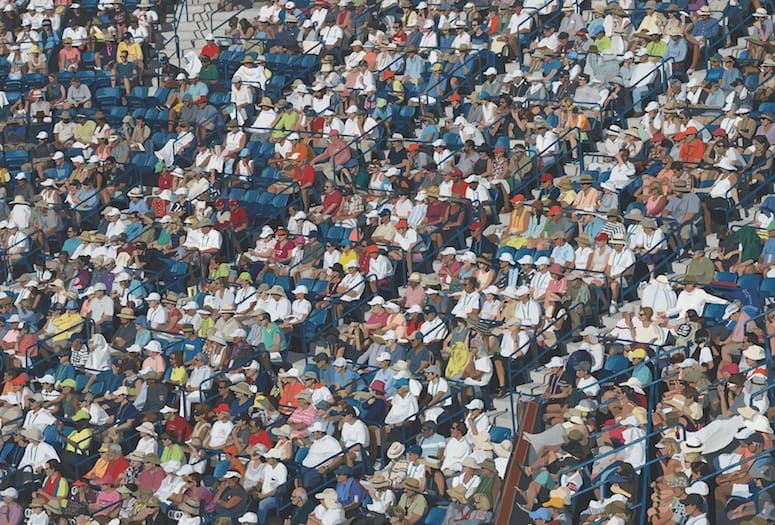 Richard Baker leans 12 freshly painted canvases against the wall of his Los Feliz studio and places another from his latest series, “At Leisure,” out of sight. It’s an unfinished scene from a baseball game between the Angels and Cleveland Indians. A Baltimore native, Baker prefers watching the American League East, especially the Orioles, Yankees, and Red Sox. “Last year I painted Derek Jeter playing his last game against the Angels and sold it right away,” he says. “I could have sold it many more times.”

The new painting, On Deck, is his second depicting a baseball game and among a prolific number of paintings he has made since transitioning from talent manager and film and television producer to full-time artist and part-time La Quinta resident. In the last four years, Baker has produced 45 canvases, and his third solo exhibition, featuring the “At Leisure” paintings, is showing through Nov. 26 at Skidmore Contemporary Art in Santa Monica. Last year, he exhibited his “Desert Scenes” series at Melissa Morgan Fine Art in Palm Desert.

The evolution of Baker the artist traces to the Wharton School of Business at the University of Pennsylvania, where he took an art history course as an elective. “I enjoyed it and used another elective to take Introduction to Fine Art Oil Painting,” he recalls. “I wanted the ability to appreciate the technique. I never expected to have talent.” He studied for three years with Rackstraw Downes, who’s known for painting realistic and highly detailed landscapes and urban environments. “He taught me how to see as a painter. He was specific about how he wanted us to paint. You have to be able to break things down into parts, shadows, and tones of color. He taught a direct style of painting: loading up a brush and putting it down on canvas. If it wasn’t right, we’d scrape if off and start over.” 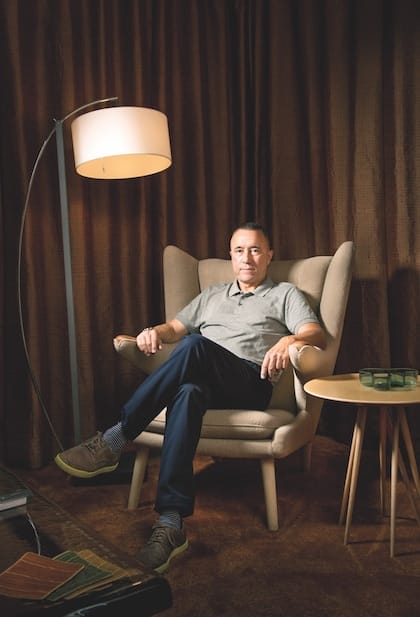 Dogs are a common element in Baker’s work, as here in 2 Points of View (top, below). With a second home in La Quinta, Baker is familiar with local sights, as seen in Coachella Tale (bottom, below).

Baker parlayed his business and art education into a career in entertainment, beginning with an apprenticeship with a television station in High Point, North Carolina, followed by a stint in New York, where he was a coordinating producer of the Emmy-winning longtime PBS series Live from Lincoln Center. He formed his own company to produce rock concert specials for MTV and one of the first stand-up comedy TV series, Comedy Tonight.

“I became somewhat of an expert in stand-up comedy,” he says. “A number of [the comedians] asked if I would manage their career. So I moved to L.A. in 1988 and opened an office.”

Baker and Rick Messina, partners in Messina Baker Entertainment, soon discovered Tim Allen and did 203 episodes of ABC’s Home Improvement, as well as The Santa Clause movies for Disney, and ABC’s Last Man Standing. “We launched The Drew Carey Show, which ran for nine seasons, and also worked with Janeane Garofalo, Patton Oswalt, and others.”

Teetering on retirement, Baker downsized his business to enjoy and paint scenes from his favorite activities: hiking, playing golf, watching tennis, visiting art galleries and wine country, and going to the beach and the annual Kennel Club of Palm Springs dog show at the Empire Polo Club in Indio. His Basenji, Caroline, appears in three paintings in the “At Leisure” series: 2 Points of View, Dog Noir, and Into The Chocolate Mountains. At the dog show, a junior handler and her Afghan hound drew his attention. 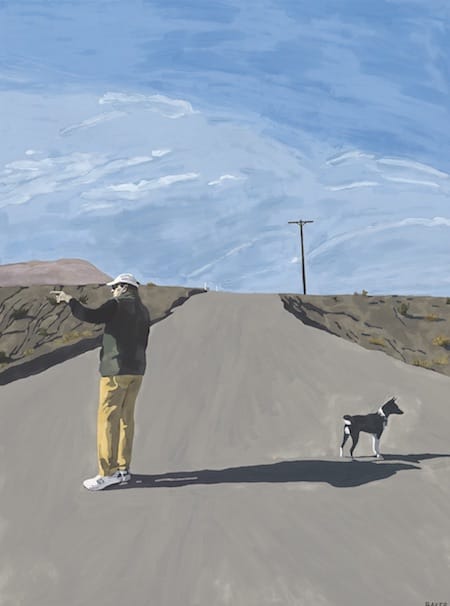 “She was a cute teenager dressed to the nines,” says Baker, who paints from his own photography. “I asked her mother if I could photograph them. I took them to an adjacent ring that had a striped tent as a graphic background and told them to just go through their normal paces. When they took a break, she gave the dog a treat, and the dog jumped up and put its arms around her. The painting is called Shall We Dance? 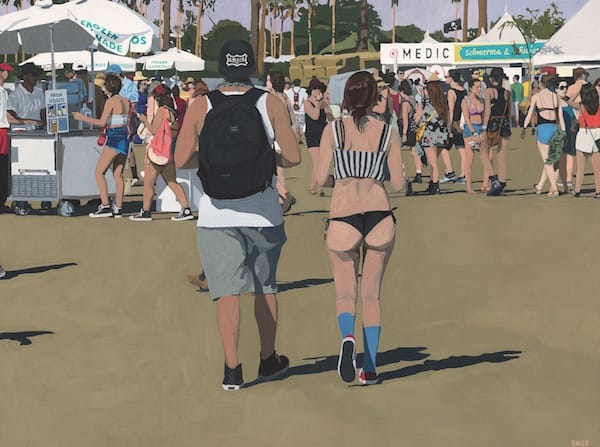 Baker has a distinctive painting style. He reduces compositions to their simplest elements on geometrically conceived landscapes, which become backgrounds for his human and canine subjects. His work is realistic, but more impressionist than photorealistic. “They border on abstraction,” he says. “Everything is simplified and flattened into small blocks of color.” He revels in mixing colors to exacting tones that capture the light and shadow. He has the advantage of decades of lighting for film and television. “We would shine a backlight on a person so it would hit them at the shoulder blades, and from the front you see a bit of a halo that makes them stand out from the background. I get a visceral reaction when I see a brilliantly lit scene. Those experiences [on set] made my eye keen to composition and lighting.”

But he seldom looks back. For the first time, he’s creating without collaborating, and finding an audience for his own artistic virtuosity.

‘we would shine a backlight on a person so it would hit at the shoulder blades, and from the front you see a bit of a halo. i get a visceral reaction when i see a brilliantly lit scene. Those experiences [on set] made my eye keen to composition and lighting.’

(Clockwise) Among the work in Baker’s studio are  Enjoying the View and Shall We Dance? Derek’s View is a tribute to the Yankee great, at his last game in Anaheim. Dog Noir. Baker and good friend Caroline, the Basenji. 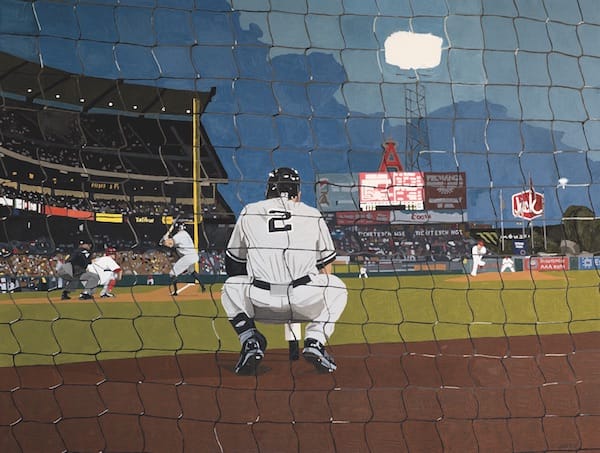 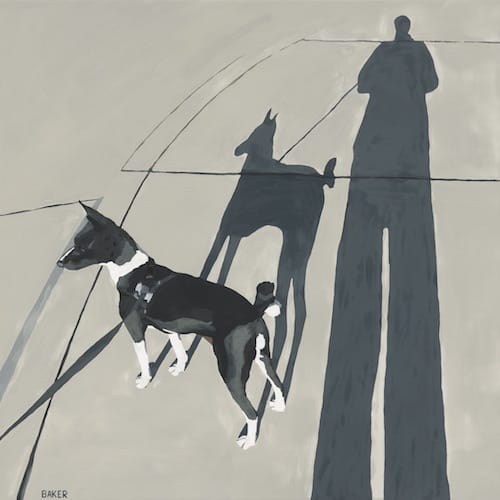