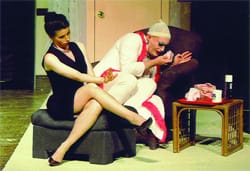 While some people see the white enclosures of Palm Springs Pavilion Theatre and La Quinta Playhouse merely as “tents,” others view them as blossoms from seeds planted by visionaries. While it may have once been like desert flowers that only appear in full bloom seasonally, local theater is growing year-round, thanks to the efforts of people dedicated to making the Coachella Valley a nationally renowned entertainment destination. How five theatrical enthusiasts see their dreams coming to fruition reflects the breadth of entertainment options becoming available in the desert.

La Quinta Playhouse has enthralled audiences with an array of offerings for two strong seasons. Entering its third season, the theater is moving its tent one block away from its initial location at Old Town La Quinta. But two things remain the same: the goal of professional-quality theater and the role of JoAnn Reeves as artistic director.

“We’re learning who can do what in the valley, and the city can see from what we’ve done that we’re sincere in what we want to do,” Reeves says. “We’ve cleaved a little spot and climbed the mountain little by little. We do what we say we’ll do. Word of mouth built shows this year, and it really started to hit for us.” Providing children’s theater classes reflects La Quinta Playhouse’s commitment to the community, and Reeves hopes the annual production of A Christmas Carol becomes a local tradition. As the theater grows, though, she also hopes to have a slate of shows that both attract and challenge audiences.

“I’m not doing Oh, Calcutta, but I can’t go all the way to the mainstream either. It’s a balancing act,” she says.

“People are willing to pay for good shows. And I want to make some of it a stretch for the audience. That’s the rewarding thing about theater.”

After two seasons of funding assistance from the La Quinta City Council, Reeves says that funding from local individuals and a growing membership is helping build the base for future growth.

“We’ve turned a corner here. We’re established. People know who we are, and we can do fundraising,” Reeves says. “For us, the sky’s the limit.”

For Justin Blake, arts and education are inextricably linked. Winning a place on the Palm Springs Unified School District School Board on a platform that stressed the importance of maintaining arts education in the classroom, Blake has been an active force in building local theater for more than five years.

This year, Blake continues his latest effort, California Desert Regional Theater — bringing a mix of professional, original theater, and conservatory-style training for professional actors to the valley. A number of shows will be performed at the Indian Wells Theater on the Palm Desert Campus of California State University San Bernardino.

“I’ve been working for four years to get community support to where I have a steering committee,” Blake says. “Being involved with the university has given a lot of that credibility.”

Blake believes that the proximity of the theater to Los Angeles and San Diego — and even San Francisco — offers an alternative to writers trying to find a stage for their new works. Working with the local Playwrights’ Circle and their annual playwright competition, Blake hopes to attract plays that will find future success across the country and build a strong reputation for the Coachella Valley.

“It’s not just about New York anymore,” he says. “Broadway is a theater theme park, and half the shows are about sets and rock stars and old hit movies. The regional theater is the place where a show grows and then goes to Broadway or even Off-Broadway.

“There’s a long list for writers to get their works into the Mark Taper [in Los Angeles] or The Old Globe [in San Diego]. There are only so many shows they can do,” he adds. “There’s a niche to fill with another Southern California regional theater with access to the Hollywood actor.

While shows such as Cirque Dreams and this season’s follow-up, Cirque Dreams: The Journey Continues, take up the bulk of the season, Taylor is dedicated to bringing a variety of professional-caliber entertainment to the desert throughout the year.

“Cirque Dreams will be here for 22 weeks,” he says. “We built the theater for that kind of entertainment, but to have it be flexible for shows like this summer’s Always, Patsy Cline. We told the community that we are a year-round theater, and we’re living up to that.”

The success of shows such as Always, Patsy Cline and concerts like the one by k.d. lang in November reflects the flexibility of the theater and the wide interests of audiences. Continued growth, Taylor says, will require a combination of realistic goals and cooperation between theaters.

“I think we set realistic goals,” he continues.” We did well for our first season, and our second season is looking great. We should be rocking and rolling really well as a complement to The Fabulous Palm Springs Follies, a complement to the McCallum and Annenberg theaters, a complement to Palm Canyon Theatre and the other theaters out there. And we’re excited to do that and work together.”

When fire damaged a major portion of Palm Canyon Theatre in 2000, it seemed that stage performances in Palm Springs would suffer a significant setback. Losing a large number of costumes and props, as well as sustaining physical damage to the theater, presented significant difficulties.

“The fire has affected people for a number of seasons,” says Artistic Director Se Layne. “We almost had to start from scratch. Luckily, we’ve had a staff who knows the professional quality we’re looking for in their work.”

Ten years after opening its doors, Palm Canyon Theatre now sets its sights on reaching a higher quality. A recent capital campaign aims for $1 million to bring the theater up to the technological standards expected of top-rate equity theaters around the country.

“We always find ourselves in a chicken-and-egg situation,” Layne says. “We exist off of ticket sales. But our audiences are cultured and have an expectation of quality. We need to bring the theater up to technical expectations in order to bring in more audience members.”

Though constantly striving to find a balance of shows that attract audiences, Layne found that gay-friendly shows such as Sordid Lives and When Pigs Fly attracted niche audiences that she hopes will continue to share in the growth of local theater.

“Our goal is to bring well-rounded theater that is of a professional quality to the valley,” she says. “I think the valley can fund those kinds of theaters that bring different shows to audiences. We could easily be the Old Globe [in San Diego] or Pasadena Playhouse. We’ve proven over the last 10 years that we can survive on nothing. We feel like we could easily grow to that level.”

Having been recognized as one of the top 20 theaters in the country for the last three years by entertainment trade Pollstar Magazine, McCallum Theatre reflects what happens when a community rallies behind a cultural center.

“We certainly reached out across the desert with our motto ‘It’s Your Theatre,’” says McCallum’s Executive Director Ted Giatas. “We’ve really gone a long way to continue that feeling. It’s a time to feel proud of what we’ve accomplished as a theater and in our community.”

Working hard to offer programming that meets the interests of the community, Giatas says McCallum Theatre’s future will take its success to a higher level.

“A lot of agents call us, having seen the rankings and knowing the reputation that we have for audiences,” Giatas says. “We also benefit from being near major cities like Los Angeles, San Francisco, or Las Vegas. It’s easier for an act to stop in town here on the way to a larger city and do a show, and often agents give us a break on the booking fee.”

As its national reputation grows, the theater continues to press forward to meet the needs of a growing community both in size and types of programming.

“At some point in the not too distant future, the year-round and seasonal population will continue to grow to the point that justifies a 2,200- to 2,500-seat theater,” says Giatas, adding that discussions are already underway. “But we also want to take a shot and try new things on stage — see what the audiences will go for. We have the chance, at the end of the day, to push the envelope.”