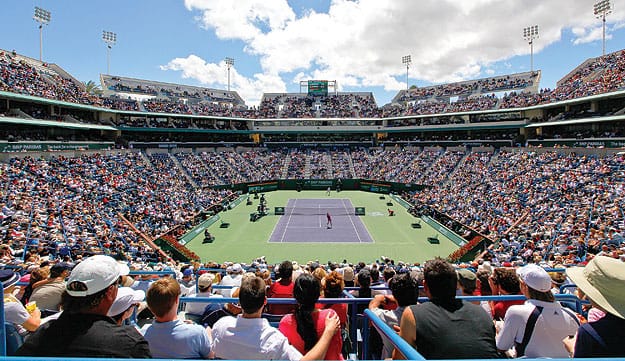 “This year, fans will see a number of improvements, highlighted by a 19,140- square-foot shade structure placed within the East Village,” says Tournament Director Steve Simon. The size of roughly three tennis courts, the permanent structure will also feature a bar and music stage, two information towers, and four video walls so folks can keep up with the action.

Simon, who worked his way from the sales department to tournament director, says there’s more fan pampering planned for the 2012 event.

“All existing seats in the lower bowl of the Stadium Court are being replaced with new seats,” he says. “In addition, permanent box seats will be installed on Stadiums 2 and 3 as well as Courts 4 through 8. A new audio system will be installed on Stadiums 2 and 3. And the Corona Plaza Video Wall will be enlarged and upgraded providing fans the ability to watch up to three matches simultaneously.”

BNP Paribas Open is the most attended tennis tournament outside of the Grand Slams (French, Australian, and U.S. opens and Wimbledon). Last year’s winners Novak Djokovic and Caroline Wozniacki are expected to return to Indian Wells to defend their titles against other top players, including Roger Federer, Rafael Nadal, Kim Clijsters, and others.