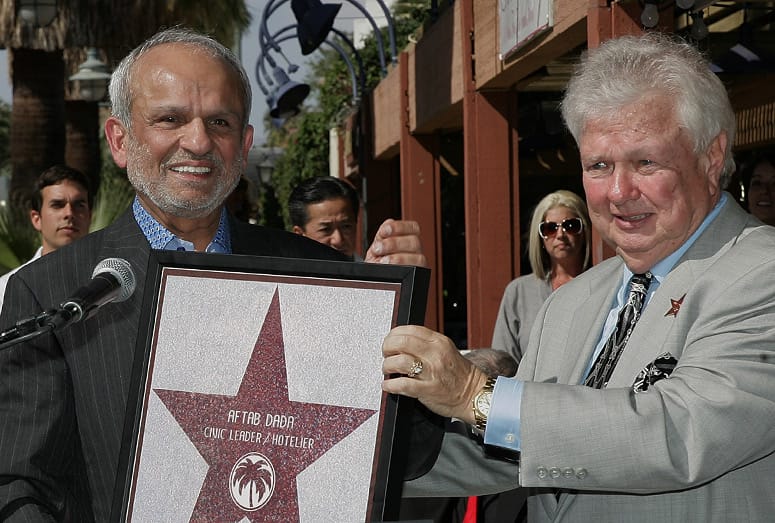 Aftab Dada, chairman of P.S. Resorts and general manager of the Palm Springs Hilton hotel, received the 365th Golden Palm Star on The Palm Springs Walk of Stars during a star dedication ceremony on Thursday March 27, 2014. The star is located at 256 South Palm Canyon Drive (in front of Pomme Frite restaurant).

Aftab Dada has been an important leader in developing close ties between the hospitality community and city officials in Palm Springs and with business leaders throughout entire Coachella Valley.  He arrived in Palm Springs in 1989,  and as general manager of the Palm Springs Hilton he oversaw the property’s transition into the first full-service Hilton in the Valley. Dada has been involved in civic activities since his arrival. In 2002, he led the charge to expand the $40 million Palm Springs Convention Center in order to attract larger conventions by building support within the community to increase the Transient Occupancy Tax twice to fund construction. In 2010/2011, he took a leadership role in the successful fight against the proposed Whitewater Jail, and in 2011, Dada had a significant role in the passing of Measure J, the 1% increase in sales tax for the City of Palm Springs that will raise over $200 million over 25 years.

He was named Businessman of the Year 2011 by the PS Chamber of Commerce.

Dada was the leader in establishing P.S. Resorts in conjunction with Palm Springs city leaders. P.S. Resorts is the non-profit association of hotels that is responsible for attracting visitors to Palm Springs with events and attractions. Their very first project was bringing the sculpture, Forever Marilyn, to Palm Springs which has become a destination for visitors from around the world and a source of countless and valuable positive publicity for Palm Springs.