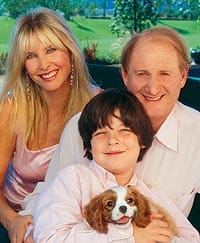 Greta Garbo stayed here. So did Clark Gable, Bette Davis, Frank Capra, Katherine Hepburn, and a multitude of silver-screen luminaries. For nearly 80 years, La Quinta Resort and Spa has enjoyed a reputation as the legendary playground for Hollywood’s movers and shakers. It seemed the natural place for Hollywood duo Mike and Irena Medavoy when they were searching for a desert retreat. La Quinta offered a connection to cinema history and a lesser urban vibe than other areas in Coachella Valley.

“We came out here to spend Christmas and New Year’s at the La Quinta Resort,” recalls Irena, who had visited the desert since childhood. “We had this feeling that if we were going to buy here, we wanted that same kind of old-fashioned, historic sense of the movies. There is also something very spiritual and healing about this place. The [Cahuilla] Indians believed the area to be the holy ground from which all life sprang.”

“It’s definitely a quieter, more pristine kind of life,” Mike affirms, gesturing to the emerald-green golf course and majestic peaks of the Santa Rosa Mountains. “It’s so serene. There’s a small-town feel to it that I really like.”

For the prolific film producer, serenity can be difficult to find. In a career spanning nearly 30 years, Medavoy has been involved with more than 300 films — 16 of which have received Academy Award nominations for Best Picture; seven won the prestigious award. Fostering a love of moviemaking that started with Errol Flynn films and Westerns, he rose from the mailroom at Universal Studios in 1964 to casting director, agent at General Artists Corp., vice president at Creative Management Agency, and vice president in charge of the motion picture department at International Famous Agency, where he worked with acclaimed directors and actors, such as Steven Spielberg, Francis Ford Coppola, and Jane Fonda.

In 1974, Medavoy took a senior production post at United Artists, the studio responsible for the Academy Award-winning classics One Flew Over the Cuckoo’s Nest, Rocky, and Annie Hall. He co-founded Orion Pictures in 1978, overseeing the production and release of Platoon, Amadeus, Dances With Wolves, Silence of the Lambs, and others. The streak of blockbusters continued when Medavoy became chairman of TriStar Pictures in 1990. Philadelphia, Sleepless in Seattle, and Legends of the Fall top the cinematic triumphs generated under his auspices. In 1995, Medavoy co-founded Phoenix Pictures, which released Holes, a children’s adventure starring Sigourney Weaver, Jon Voight, and Patricia Arquette.

However, filmmaking accounts for only one dimension of his life. Both civic-minded Medavoys give their time to philanthropic endeavors within and outside of the film community. Mike is a founding member of the board of governors of the Sundance Institute and a co-chairman of American Cinematheque, a nonprofit cultural organization dedicated to advancing filmmaking. He serves on the boards of the John F. Kennedy School of Government at Harvard University, the Museum of Science and Industry in Los Angeles, and the University of Tel Aviv. As a University of California Los Angeles alumnus, he maintains an active alliance with the school, serving on the board of the UCLA Foundation and chairing the Leadership School for UCLA’s Center for International Relations. In 1999, he received a UCLA Neil H. Jacoby Award for his exceptional contributions to humanity.

His service extends into politics, as well. He participated in President Bill Clinton’s 1992 and 1996 campaigns and, in 2002, served on former Gov. Gray Davis’ California Anti-Terrorism Center’s Executive Advisory Board.

Irena is executive vice chair of Community Outreach Assistance for Children’s Health for kids and their families. Cedars-Sinai Medical Center sponsors the initiative, which offers free, quality health care to underserved youth throughout Los Angeles via two mobile medical units. The program provides preventive care, as well as diagnosis and treatment. She is also a founding board member of FLASH, a public-private partnership emergency preparedness program developed in response to Sept. 11, 2001.

Mike and Irena credit their families, Euro-Asian ties, and unusual rearing for the inspiration to engage in significant issues. Mike was born in Shanghai, China, of Russian parents who relocated to Chile in 1947 before settling in Long Beach in 1957. Irena’s parents, also Russian, spent time in Germany and Morocco before coming to the United States in 1957. “We know how lucky we are to be in this country, and we never take that for granted,” Irena says. “Our parents fought hard to come here, to have the kind of freedom that this great country provides us. At the same time, it’s a large world out there. I think the 21st century is about how we all live together, and we had better develop [deeper] relationships with other countries.”

Mike adds, “Part of it has to do with the fact that I was born abroad and lived part of my life there, and part of it is simply my interest in trying to figure things out. Both of us are very community-minded and feel we have to give back.”

Mike, who recently lost his father and a film-star friend, finds the desert an easier place than Los Angeles for periods of contemplation that restore his spirit. Here, the phone does not ring constantly.

The periods they spend in La Quinta — frequent weekends and a two-week stretch during the season — afford them ample opportunity to spend time with each other, their 6 1/2-year-old son Nicky (Mike also has an adult son, Brian, from a previous marriage), and their two dogs Duke and Paris. When not listening to his iPod — he has 9,000 tunes ranging from classical to rock — Mike plays tennis with La Quinta artist and gallery owner Sally Huss. Irena enjoys reading and swimming.

A typical evening might include a visit to The River at Rancho Mirage for a casual dinner at The Yard House or Fleming’s, followed by a movie — or eating out at some of their favorite desert restaurants, including Pacifica, Roy’s, and Mamma Gina’s. Yet they also enjoy dining at home and entertaining family and friends with an informal buffet and movie screenings. In fact, the tasteful décor of their 4,000-square-foot home — replete with overstuffed couches and accessories infused with European and Moroccan sensibilities — truly evokes a laid-back lifestyle.

Mike met Irena, a former model, when she was 19 at the now-defunct Ma Maison in Beverly Hills. “Mike was doing a [James] Bond picture and I could speak Russian,” she recalls. “There was a part for a Russian girl, and I remember thinking, ‘Oh my god, he’s just so cute.’”

“She obviously didn’t have her glasses on,” Mike laughs.

Glasses or not, they reunited on an arranged date 12 years ago and tied the knot about two years later in San Tropez, which has become their annual vacation destination. The Medavoys enjoy traveling; they take frequent trips to Italy, Turkey, and France.

In 2005, Phoenix Pictures will go into production and release several films, including All the King’s Men, a political thriller starring Sean Penn, Jude Law, and Kate Winslet; In My Country, a story about truth and reconciliation in South Africa starring Juliette Binoche and Samuel L. Jackson and directed by John Boorman; and Stealth, an action-adventure pitting three U.S. Navy pilots against a rogue, unmanned fighter plane directed by Rob Cohen.

Irena is quick to praise Mike, known for opening the stage to aspiring talent (he took a risk on an unknown bodybuilder in Terminator).

At last year’s Palm Springs International Film Festival, Mike presented the Rising Star Award to ingénue Scarlett Johansson. The Medavoys hope to attend this month’s festival. “[The festival] is run very well, and I know how difficult those [events] are to run,” he says. “The talent, the turnout … it is a wonderful event,” Irena adds. “It’s important for Southern California to have it.”

Mike’s plans include producing a documentary, teaching at Harvard or UCLA, and possibly writing another book (his first, You’re Only as Good as Your Next One, was published in 2002).

Regardless of where his work takes him, Mike and Irena hope to spend more time in San Tropez and the desert — helping to preserve La Quinta’s “Old Hollywood” charm.