Seven bright stars accent loops of dotted lines floating below a white-scalloped peak. A lightness of being emerges in the “last vestiges of daylight.” This vision shows Palm Springs’ protective mountain through the eyes of an artist in 1934. People speak of the desert’s spiritual aura; Agnes Pelton painted it. Orbits, for which her guiding sketch notes the sky’s time frame, reflects how Mount San Jacinto appeared to her when she lived in Cathedral City’s Cove.

Mountains and art withstand the test of time. And so it is that, snuggled up to the San Jacinto range, Palm Springs Art Museum presents Agnes Pelton: Desert Transcendentalist — 25 years after its retrospective exhibition identifying the enigmatic artist as a “Poet of Nature.”

Pelton (1881–1961) painted portraits and landscapes, but those were mostly her conduits of income. This exhibition concentrates solely on the abstractions drawn from the center of her consciousness.

“Agnes kind of was always with me,” says Mari Coates, the San Francisco-based author of The Pelton Papers, A Novel, whose grandparents helped Pelton establish a portraiture business when she moved from Brooklyn to Long Island in 1921 after her mother’s death. In addition to bringing influential friends to Pelton’s studio, Coates’ grandfather commissioned portraits of himself, his wife, daughter, and brother-in-law. 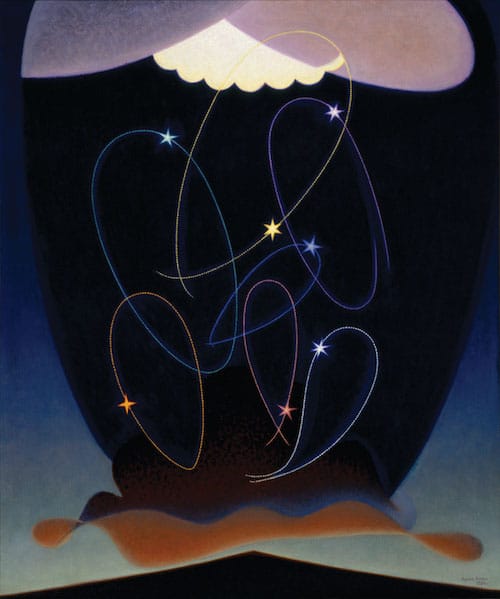 I grew up with those paintings, one of the windmill [her grandfather also commissioned a ‘portrait’ of the former Long Island gristmill where Pelton lived from 1921 to 1923] and a couple of desert landscapes,” Coates says. “We loved them and cared for them. They were important to us. But nobody knew about her, and we didn’t expect them to.”

In fact, Coates didn’t recognize they were the works of a noteworthy artist until 1996. “I moved to San Francisco and was looking at the newspaper when I saw a review of [the exhibition Agnes Pelton: Poet of Nature] at Oakland Museum,” she says. “I nearly fell off my chair. It turned out she painted not only portraits and desert landscapes, but also abstracts of which I had no clue. I went right away to the museum and was astonished. I realized that I had a limited sense of who she was.”

Some 10 years later, Coates decided to write a book about Pelton’s life, but she chose a first-person novel format in lieu of a biography “because I wanted to explore her inner life.”

The novel describes a pivotal point when Pelton was living in the windmill and delved into theosophy, calling the philosophy’s Russian-immigrant founder Helena Blavatsky and herself “fellow travelers”: “I began the journey I felt I had waited for my entire life. Theosophy was a universe unto itself, with its infinite worlds of creators and creation, an enormous canopy that held under its protection Hinduism, Buddhism, and the Judeo-Christian beliefs.”

Not long afterward, Pelton — also influenced by the philosophies of Carl Jung and Wassily Kandinsky, as well as principles of Agni Yoga — began painting abstract works from subconscious visions.

In similar fashion, Coates found messages coming to her while, working on a master of fine arts degree in fiction, she commuted daily by train to the University of California Press in Berkeley and “heard” Pelton’s voice.

“I just wrote down what she said,” the author says. “I knew there were microfiche [records] of her sketchbooks and journals. But the voice came to me so compelling. I was terrified it would be wrong. So I avoided the source material until I felt secure in what I was doing.” 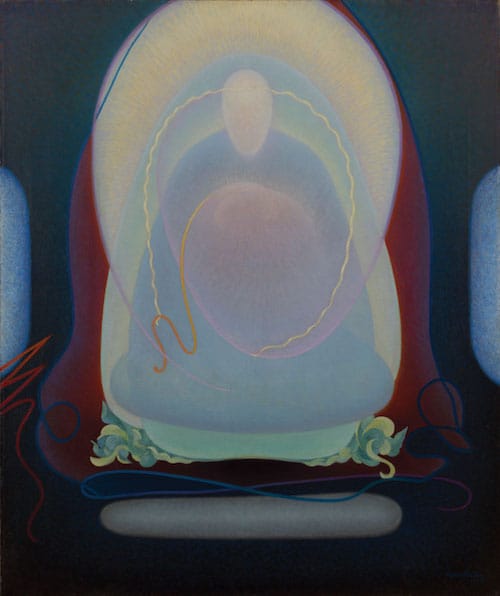 A video recording of a reading Coates did while working on the book — posted online — caught the attention of Ann Japenga, a Palm Springs writer passionate about desert history. Japenga contacted Coates and told her about the Cathedral City house Pelton had built and where she lived the last dozen years of her life. The house had just been purchased by Peter Palladino and Simeon Den — but not for its historic value.

“I never heard of Agnes Pelton,” Palladino says, adding that during escrow they were given the book published for the Poet of Nature exhibition. “I don’t appreciate abstract art per se. But [Pelton’s work] really called to me. I had never seen anything like it. She wasn’t nonobjective; she painted very personal and spiritual, and I felt that. When I first saw her painting Mother of Silence, I teared up. She has entered my psyche. I sense a communication with her.”

Palladino began collecting Pelton’s work, including portraits, landscapes, pastels (a nude and a rendering of her cabin on Garner Valley’s Thomas Mountain), and what Pelton called her “imaginative” paintings — her initial foray into psychological abstraction, dating 1911 to 1917.

“I have 19 of her works,” Palladino says. “The one I loaned [for the museum exhibition] is Transcendent Being [painted in 1934]. Agnes talked about it being a vision and didn’t sell it.” Per Coates’ novel, Pelton considered it a “personal icon” with which she was unwilling to part.

In 2013, Palladino and Den formed the nonprofit Agnes Pelton Society. They have hosted open houses and readings of a one-woman play by Nancy Stowe Sheley (another Japenga connection) based on her 2001 “Bringing Light to Life” dissertation for an American studies Ph.D. at University of Kansas.

Now on faculty at California State University, Long Beach, Sheley has given presentations on Pelton at art conferences across the United States, as well as in Europe. “There’s a light in [her paintings] that’s almost off the canvas,” Sheley says. “The images speak to something beyond your eye.”

In his 2010 dissertation “Synthesizing Transcendental Painting” at the University of Maryland, Nathan Rees quoted from Pelton’s 1938 artist statement, explaining she “meant her art to evoke the sensation of beginning a journey: ‘Somewhat as one enters a train or some station, the arrival at another place takes shape in the mind …’ In her view, her paintings were not physical vehicles to other states, but acted as portals allowing the mind access to locations that the body had not yet experienced. … Pelton continued, ‘But though we have not left the material world as in entering a train, we have left the station, and our visioning mind is open to the fleeting sight on the way and our becoming destination.’” 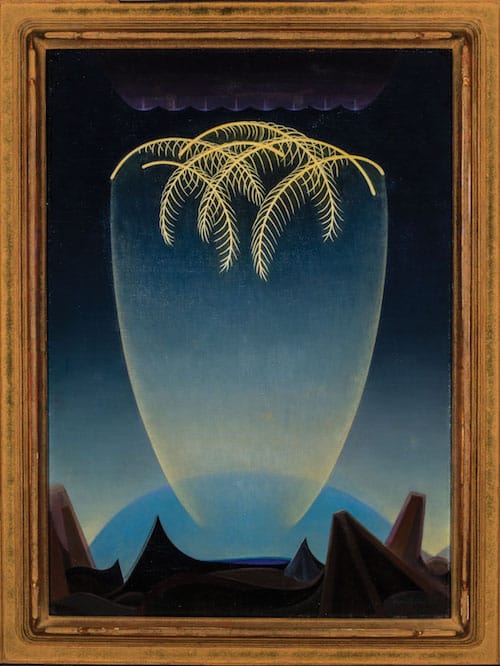 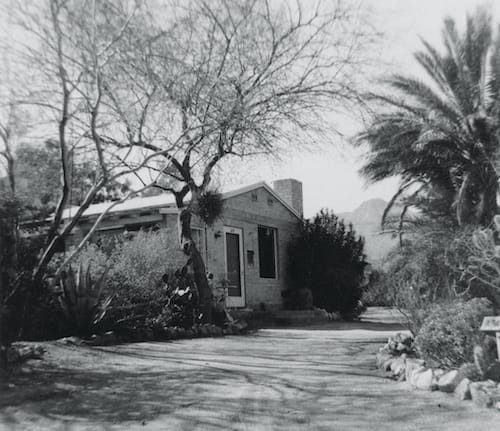 Agnes Pelton lived and worked in her 1938 Cathedral City Cove home for more than 20 years. Pelton at home in the 1940s with her painting Messengers. 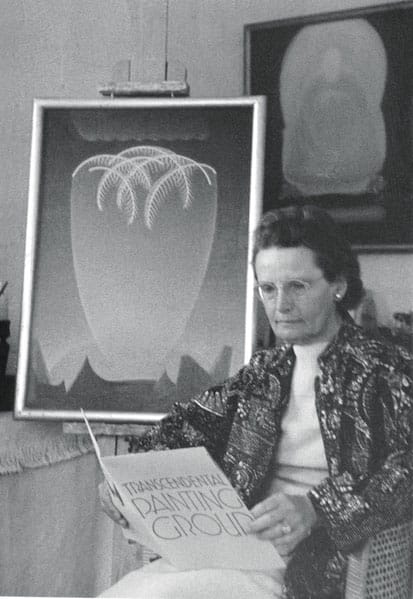 Michael Zakian, who died earlier this year, became an expert on Pelton when he curated the 1995–96 Poet of Nature exhibition while associate curator of art at Palm Springs Art Museum. Most recently the director of the Frederick R. Weisman Museum of Art at Pepperdine University in Malibu, Zakian contributed to the current exhibition’s catalog with an essay titled “Agnes Pelton: Transcendental Symbolist.” He begins with the artist’s own words, which fall in line with those quoted by Rees: “These pictures are like little windows, opening to the view of a region not yet much visited consciously or by intention — an inner realm, rather than an outer landscape.”

And as Coates references Pelton’s lack of widespread recognition, Zakian wrote: “When Agnes Pelton died of liver cancer in 1961, she had been largely forgotten by the world outside of a small group of friends who shared her spiritual beliefs and her tight-knit circle of neighbors in Cathedral City. … She had three one-person shows in Manhattan between 1929 and 1932, while between 1932 and 1946 she had one-person exhibitions at most of the major art museums in California … But she had no sustained gallery representation and no real way to actively promote her art. When each museum exhibition ended, her work was returned to her studio where it languished, remembered in each city only by handfuls of sympathetic admirers who could appreciate its transcendent beauty and spiritual messages.”

Indeed, Oakland Museum curator George Neubert purchased the Orbits study of Mount San Jacinto at a thrift store in Santa Monica. The 1934 painting now has gained attention as an important piece in the exhibition organized by Phoenix Art Museum. 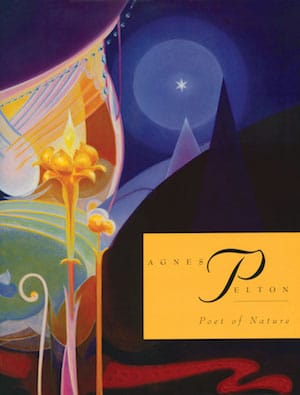 Agnes Pelton: Desert Transcendentalist — organized by Phoenix Art Museum and exhibited at New Mexico Museum of Art and Whitney Museum of American Art in New York — opens in November at Palm Springs Art Museum and continues through Sept. 5, 2021. To see the exhibition, visit psmuseum.org for hours and COVID-19 safety information. The accompanying exhibition catalogue captures much of the artist’s biographical life and beliefs and analyzes her work in the context of both. Pelton’s journals, correspondence, and sketches are housed in the Smithsonian Institution’s Archives of American Art.

• READ NEXT: Author Jeff Crider Shows How Generations of Foreign Laborers Put the City of Coachella on the Map.