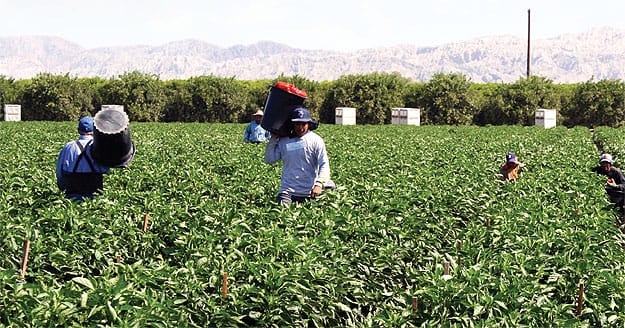 After a dip in 2008, the value of Coachella Valley’s agricultural yields rose in 2009 (from $491.5 million to $575.4 million). The Coachella Valley Water District annual report also shows that where crop acreage devoted to fruit declined by 2 percent, yield increased by 33 percent, in part because young trees were reaching productivity.

“Last year was a very good season,” says Franz De Klotz, director of marketing for Richard Bagdasarian Inc. in Mecca. One of Sunkist’s largest producers of lemons, Bagdasarian has benefited from the cooperative’s marketing efforts. “We have opened up the Chinese market and now are shipping to Vladivostok in Russia,” De Klotz says.

Domestically, Bagdasarian is introducing organic lemons. “Last year, we had a ‘test,’” De Klotz says. “This year, we actually have salable quantities.” The grower also had a “very good season” in grapes and is transitioning some of its grape acreage to organic. “We will have good commercial production of organic grapes in the Coachella Valley as we go into May,” De Klotz says.

Bagdasarian started converting portions of its acreage to organic three years ago with bell peppers. “It’s just to create another facet of something else we can offer to our customer base,” De Klotz explains. “As times have become tough, when somebody stops a 53-foot truck, they like to load as much product on it in one location as they possibly can. The more items we offer, the more we can create a situation where they have a one-stop shopping experience. It saves them money.”

Peter Rabbit Farms in Coachella found a way this year to save itself money and go green. For decades, the company has shipped truckloads of carrots to its Bakersfield operation for processing. “There’s a lot of dirt and debris that is carried along with no value,” says President/ CEO John Powell Jr. The grower built carrot-washing equipment that eliminated about 10 trucks a day from the Coachella-Bakersfield route. Instead of running 40 trucks a day during the February-May season, Peter Rabbit ran 30 this year. “It saves fuel, road miles, wear and tear on the trucks, and reduces emissions,” says Powell, adding that the process created eight fulltime jobs during harvest to operate the equipment.

Although it’s the sun that makes the Coachella Valley such a rich agricultural treasure, it’s the moon that is spurring the sale of dates. That is, because Islam follows the lunar calendar, Ramadan falls 11 to 12 days earlier every year. After a day of fasting, Muslims gather for a meal that begins with the ritual eating of dates. Coachella’s SunDate, which supplies 2 million pounds of medjool dates a year to Costco stores across the country, exported dates to Dubai and Qatar this year for Ramadan.

“We freeze a lot of the product, so it maintains the same freshness,” says SunDate’s sales manager, D.J. Ryan. “Most of the world doesn’t freeze.” So in the Middle East, where new crops don’t come in until late August or early September, Ryan explains, Ramadan observers now rely on dates from the Coachella Valley.

Prime Time International’s Coachella operation is building this year on a nonprofit aspect of its business. The corporation category winner of the valley’s National Philanthropy Day award last November has set aside four acres for Hidden Harvest, a Coachella-based charity that collects produce left behind in the fields for low-income farm workers and their families.

“They will help select what they want planted on those four acres and will assist in planting the crop to harvest,” says Mike Aiton, director of marketing. “All the products are going to be donated to them for their distribution.”