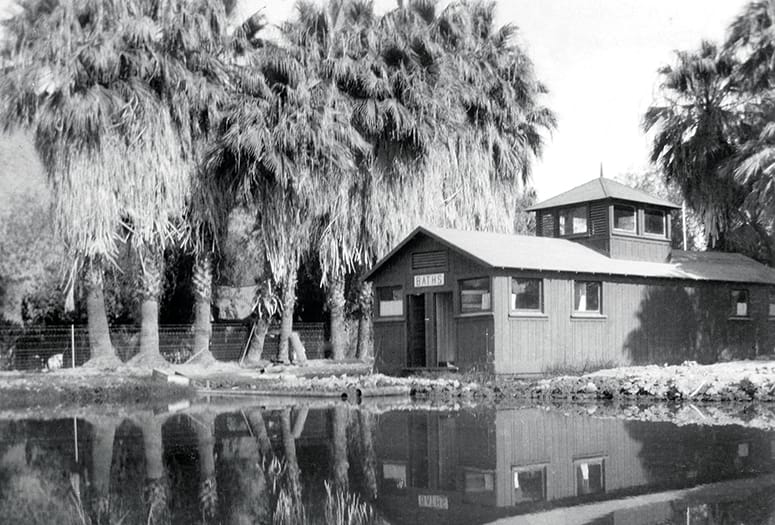 In early summer 2015, bulldozers and backhoes lumbered onto the 18-acre parcel of Agua Caliente Indian Reservation land abutting the corner of Indian Canyon Drive and Tahquitz Canyon Way and began demolishing the Spa Hotel to make room for a cultural campus emblematic of the area’s First People’s eternal ties to the land.

“The Spa Hotel was built in 1960 by outside people who designed it like they wanted,” says Agua Caliente Band of Cahuilla Indians Tribal Chairman Jeff L. Grubbe.

While he acknowledges the significance of the midcentury aesthetic in modernism-hungry Palm Springs, he observes that the style, with its white columns and exaggerated pomp, never really represented the Tribe, nor was it a fitting symbol of the spring that has been the heart of Tribal life for thousands of years.

“It’s where our creation story is based,” Grubbe says. “It’s one of the most important pieces of land we have, so for us to have the ability to start over from scratch and build something that reflects us as a people — our history and culture and traditions and how we got here — is very special to us.”

The initial phase of the 5.8-acre cultural center, expected to be completed in 2020, will feature a plaza, gardens, a bathhouse and day spa, walking paths, and a museum. Every square inch, notes Grubbe, will reflect the Agua Caliente people and honor the homeland they have stewarded for millennia. 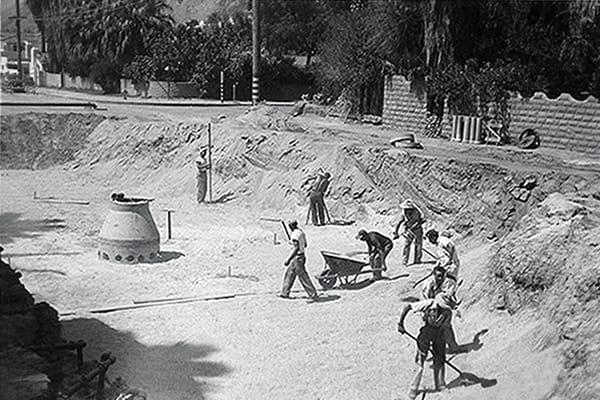 Road widening construction in 1950s by the city of Palm Springs created the need for a water collection ring. 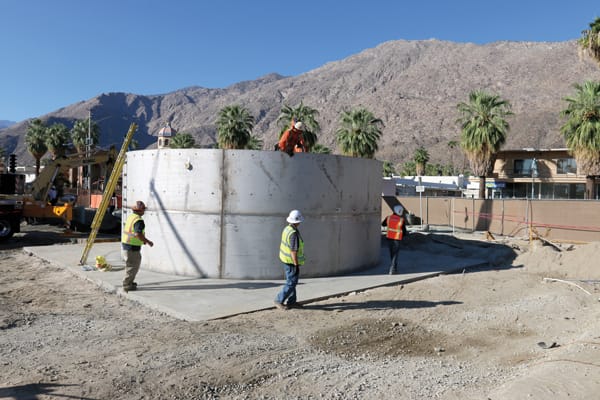 The design vision embraces indigenous plants, flowing water, and a color palette plucked from the rocks, sand, and sky and lifted from canyon walls ablaze in desert patina and tempered with soft hues of mesquite, cottonwood, creosote, and other local flora. Plaques describing the elements of the natural world bequeathed to the Agua Caliente — desert plants, animals, minerals, and the like — will dot the campus, providing a glimpse into the Tribe’s cosmology and culture.

Meandering between the new Agua Caliente Cultural Museum and luxurious day spa, the Oasis Trail will inspire exploration as it sets off from the corner of Tahquitz Canyon Way and Indian Canyon Drive, ultimately leading to the Spa Resort Casino. Grubbe adds that future plans for the adjacent space also include retail shops and hotel and casino expansions.

“Obviously, everything doesn’t have to be all about casinos — we want to share our culture and have more businesses for locals to shop and eat at. This village is the start of all that.”

Pulsating along the periphery of the construction zone, the Agua Caliente Hot Mineral Spring bubbles as it has since time immemorial, discharging an average of 24 gallons of naturally heated water per minute in protective isolation. 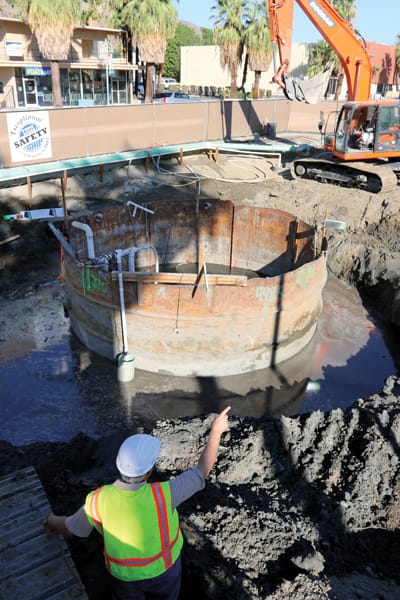 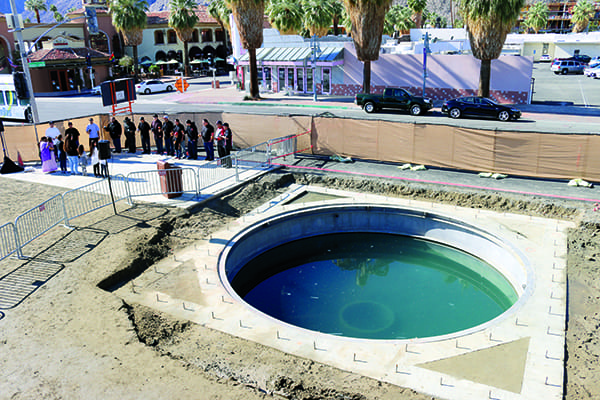 The completed project, with the new ring in place.

Even as the mechanical beasts bulldozed over rocks and knocked down walls in June 2015, the Tribal Council remained ever vigilant to safeguard the mineral-rich hot waters, considered the locus of the Agua Caliente’s collective soul.

“We had companies and experts consult with us on where to place the spa facility so it wouldn’t disturb the water as it comes up,” Grubbe explains. “Everything is moved off and back from that area, cleared, and will be plumbed into the spa facility itself.”

A cap emblazoned with the Tribe’s logo will memorialize the Hot Mineral Spring and protect it from potentially damaging exposure.

Warmed by geothermal energy to an estimated temperature between 160 and 180 degrees Fahrenheit, these ancient waters push through a 1.5-mile-long chimney, rich in healing minerals such as magnesium, sodium, and sulfate from an underground reservoir — the result of rain and mountain snowmelt collecting over 12 centuries. As pressure forces the water up, the temperature drops, and the water emerges at approximately 105 degrees.

Results from a United States Geological Survey study released in 2011 confirm that the spring water comes from its own reservoir 8,000 feet below the surface. Geological studies show that the Hot Mineral Spring is not linked to the Coachella Valley aquifer — the desert’s main source of drinking water.

“Sharing our culture with the community will have a long-lasting positive effect.”

The Hot Mineral Spring also remains untouched by other water sources. There are no traces of the radioactive hydrogen isotope tritium, a byproduct of nuclear fission, which affirms that Agua Caliente spring water has not seen the surface, nor mixed with water that has breached the ground, since at least the 1950s.

During the time of the Kauisik clan — one of the original clans of the Cahuilla Indians who inhabited the area long before European settlers discovered this desert paradise — the Hot Mineral Spring provided irrigation, potable water, warm baths, and healing.

A Cahuilla legend retold by Tribal elder Francisco Patencio in the mid-1900s offers this colorful tale about the Hot Mineral Spring’s creation:

The head man, Tu-to-meet, was tired and sick and lame, so he took his whó-ya-no-hut [staff of power], which he struck in the ground. He twisted it around, and caused the water of a spring to come out … He named it Sec he, meaning the sound of boiling water, which is up to the earth and on the earth, which is never to dry up, never to go away, but to be there forever and always for the sick.

It’s been a few years since Tribal members have been able to “take the waters,” which has impacted some of the elders, Grubbe says.

“They’re dealing with a lot of different ailments,” he confides. “We also have young ones growing up who have never experienced the water and don’t understand what it means to us, so it’s important to get the spa portion of the development up and running.”

The project’s multiyear pace reflects the Tribe’s overarching respect for the Hot Mineral Spring and surrounding land. They have gone beyond the usual requirements, in terms of federal and state environmental protection policies, because of the site’s cultural significance.

The development encountered additional delays when artifacts — some roughly 5,000 to 8,000 years old, according to carbon-dating testing — were uncovered during excavation. A team of Tribal volunteers was then tasked with carefully sifting through the upturned earth in search of archaeological treasures. 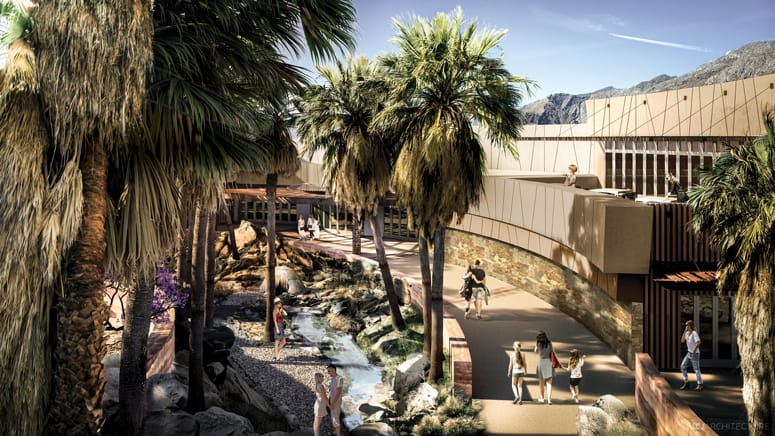 The new Agua Caliente Cultural Center, expected to open in 2020, will feature a museum, an outdoor oasis trail and gathering plaza, and a bathhouse and day spa at the site of the Tribe’s revered Hot Mineral Spring.

“My sister’s been there almost every day,” Grubbe continues. “We found beads, shells, different types of jewelry — items not even from this area that indicate we were trading with the coastal tribes — stuff that we’ve never even seen.”

The discovery of these relics at the construction site dovetails beautifully into the planned cultural museum, a project that has been in the works for decades, Grubbe notes.

“It’s been a long time coming; nothing in the valley will compare to what we’re planning to do,” he continues. “Palm Springs has a great downtown area, and this project is going to redefine downtown by adding to it and offering different venues to enjoy.”

The global takeaway hoped for with this initial phase of development is to provide an engaging and informative snapshot of the Agua Caliente Band of Cahuilla Indians.

“We want people to know who we are, how we flourished, how we struggled when the settlers came, and how we persevered and started to flourish again,” he says. “That’s why we started with the spa and museum — to share what we have and present our story.”

Grubbe admits that it would have been more financially lucrative to build a hotel and expand the Spa Resort Casino.

“But not every decision the Tribe makes is based on revenue,” he says. “Sharing our culture with the community will have a long-lasting positive effect. Money will come and go, but this site will last forever.”

Uncover some of the science behind the Agua Caliente Hot Mineral Spring’s healing waters.*

Sodium, the sixth most abundant element on the planet, commonly appears in the form of sodium chloride, or salt, which increases the water’s density and a person’s buoyancy, creating a “floating” sensation that contributes to an overall relaxing experience. Sodium also occurs naturally in hot mineral water as the compound sodium bicarbonate, or baking soda. On its own, the element reacts vigorously with water and can tarnish within seconds of being exposed to air.

Discovered by British chemist Joseph Black in 1755, magnesium forms approximately 2 percent of the Earth’s crust. It is essential for the formation of bones and teeth in the human body and plays a role in the functioning of more than 300 enzymes that regulate many bodily functions, including energy and protein production. When combined with sulfates, as in the case of the Agua Caliente Hot Mineral Spring, it can help soothe and tighten skin.

Essential to all living things, calcium contributes to strong teeth and bone growth and is also one of the eight elements that make up the Earth’s crust. It can be present as a bicarbonate compound in water, which some balneologists believe can increase circulation.
*In parts per million