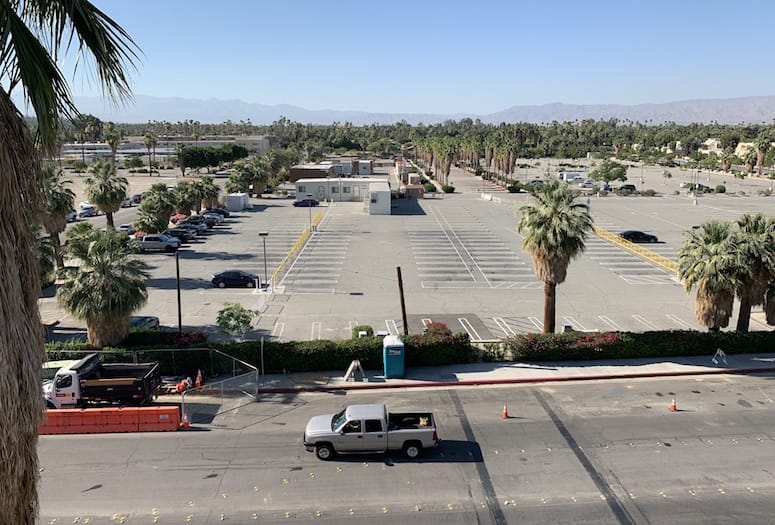 The new Palm Springs arena will sit on this land just a couple of blocks north from the new Agua Caliente Cultural Center.
PHOTOGRAPH BY JIM POWERS

Live Nation Entertainment, the world’s leading live entertainment company, has signed on as a strategic partner to supply the new arena with its large stable of top touring artists and premium live events. Additionally, NHL Seattle, led by owner David Bonderman, and OVG have jointly submitted an application for the 32nd AHL franchise expansion team, which, if awarded, would play in the new arena in Palm Springs for the fall of 2021.

Located on 16 acres of tribal land at the intersection of Amado Road and Calle Encilia in Palm Springs, the arena will be more than 300,000 square feet and feature as many as 10,000 seats or more and include modern amenities such as suites and premium hospitality clubs. The arena will include an adjoining facility that will serve as a year-round community gathering space as well as the training center for an AHL team.

“This is a unique partnership that will forever change the face of sports and entertainment in Palm Springs and the Coachella Valley,” says Tribal Chairman Jeff L. Grubbe. “We are creating a healthy community gathering place for Coachella Valley families and visitors from around the world to celebrate, play and experience diverse entertainment opportunities in a state-of-the-art arena.”

This project adds to the excitement already being generated by the ongoing construction of the Tribe’s Agua Caliente Cultural Center in downtown Palm Springs, which features a new state-of-the-art museum and world-class spa opening in 2020.  Add to that the future construction of the Tribe’s third casino in nearby Cathedral City expected to break ground in the near future.

The arena will be built for conventions, large meetings, international events, as well as award shows and exhibitions. Privately funded at no risk to the City of Palm Springs or taxpayers, the news comes as OVG is in the midst of a building boom. In the past 24 months, OVG has announced the development of venues in Seattle, Belmont Park in Elmont, New York, the University of Texas in Austin, the new Winter Olympic 2026 venue in Milan, and now Palm Springs.

Construction of the new arena in Palm Springs is expected to create thousands of permanent and temporary jobs for the community. Groundbreaking and construction are scheduled for February 2020. The arena is expected to open by fall 2021 in coordination with the Seattle NHL franchise for the 2021-2022 AHL season. OVG is currently leading and financing a $900 million-plus project at Seattle’s KeyArena that, when completed in 2021, will be home to Seattle’s NHL team.

“With each venue, we’ve had the privilege of building and managing, Oak View Group has consistently continued to raise the industry standard, and the arena in Palm Springs will be no exception,” says Tim Leiweke, CEO of Oak View Group. “We look forward to working with Agua Caliente to build what we consider to be one of the most premiere music and professional sports arenas in the world.”

“The new arena in downtown Palm Springs is a terrific project. If we are successful with our application for an AHL Franchise, it would represent an exciting opportunity to bring the first professional hockey team to this region,” says Tod Leiweke, CEO of NHL Seattle. “We are confident that the market is ready to embrace a winter sports team and that the community will help us achieve the minimum level of season tickets and premium sales we need.”

“We’re pleased to be able to partner with Oak View Group and Agua Caliente for this new state-of-the-art arena and look forward to bringing in top touring artists and live events to the valley for years to come,” says Bob Roux, president, US Concerts, Live Nation Entertainment.