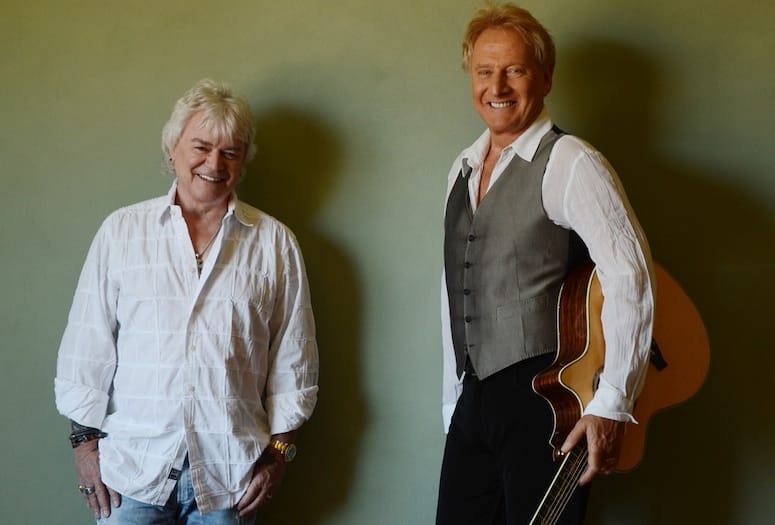 As Air Supply’s Graham Russell soaks in a thermal bath at Two Bunch Palms in Palm Desert, relaxation is the goal, but inspiration has other plans.

Though the energy is tranquil and peaceful here, his nearby guitar is calling out a song for him to write. Having penned eight Top 10 songs during the early 1980’s, Russell knows not to ignore his inner muse.

Along with Russell Hitchcock, the two Russells that form Air Supply have many songs and shows in their past, but none quite as special as this year’s 40th Anniversary Tour. With a 2014 hit song, these soft rockers are breathing new life into their music on the Billboard dance charts. Their newest dance tune will premiere on tour starting next week.

Air Supply returns to the desert Feb. 14 with a single show at Agua Caliente Casino Resort Spa in Rancho Mirage.

Russell took the time out of his busy tour schedule to speak to Palm Springs Life.

How has the 40th Anniversary Tour gone so far?

“The crowds are really responding to the fact that it is 40 years. I think it’s quite an achievement for any artist. It’s really strange, like suddenly we are the outside looking in, and it’s us this time. We’re not looking at another artist, like The Rolling Stones or somebody, whose been together 50 years.  We’re happy about it and looking forward to a great career from here on out.”

When you met Russell Hitchcock doing Jesus Christ Superstar, did you think you would be making music together 40 years later?

“God no! I don’t think anyone can imagine that. We thought maybe a couple of years at most. We were proved wrong. It’s great. We never have expectations. We just do what we do. We’re very good at this…it’s our little niche. It wasn’t how we started out, but it was created along the way.”

You pretty much created the genre of soft rock… Did you see All Out Of Love performed on Glee?

“Yes, I think it was really well done. That was a nice surprise! That song pops up all the time. I think it’s been in 30 movies so far. People just play it, which is great for us. It keeps us visible even though we may not be in the charts that much.”

You had a recent song on the charts though?

“We had a big dance hit last year, Desert Sea Sky in the Top 30 of Billboard charts. Somebody called us and said they had heard one of our songs live and wanted to remix it, so we said, ‘Yeah, go ahead.’ So we celebrated having hit songs in the charts for the last five decades. We’re very proud of that. We have I Want You, another dance song coming our this week. We are rehearsing it this coming week and will play it in the desert.”

Have you performed in the Palm Springs area before?

“Yes, several times. People really get into our shows. We always go sing one song out in the audience. It’s really the audience and Air Supply performing. They are a big part of the show for us. We love it all.”