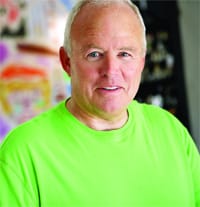 Since retiring in the late 1980s, Steve Maloney has spent most of his time making art. Although heir to the fortune of W.E. Upjohn (scion of the pharmaceutical company, now Pfizer), he’s hardly a household name. But he’s working on it. He has publicists in California and New York City to spread his name as thickly and evenly as the resin and acrylic he uses on his collages and assemblages.

Slowly, surely, it’s working.Especially since he unveiled Banned Booty, a portfolio of 12 works (10 sculptural paintings and two installations) assembled from items that the Transportation Security Administration confiscated at six California airports after Sept. 11, 2001.

USA Today and The Wall Street Journal interviewed Maloney about the works, and he has appeared on CNN Headline News and National Public Radio.

He bought the items at auctions sight unseen for $1 a pound. The contraband cache included everything from nail clippers to toy guns, cigar cutters to cigarette lighters, Swiss Army knives to scissors, corkscrews to water pistols, bicycle kickstands to frying pans, and needle-nose pliers to doctors’ reflex hammers.

Maloney affixed the objects to abstractly painted stainless steel or canvas, then encased the assemblage in resin. Grandma’s Booty includes a fork and knife, a pink Swiss Army knife, pill cutters, manicure and sewing kits, and potato peelers. A Cut Above consists of scores of scissors.

The centerpiece of the series is Houdini Booty Lock-Up, a huge bulletproof Plexiglas cube stenciled with airport destinations (LAX, SMF, OAK, SNA, ONT, SMP) and wrapped with 60 feet of hand-painted rusty chains and antique padlocks. The cube is crammed with seized leftovers that include knives, pliers, corn-on-the-cob skewers, barbells, blender blades, and the most unusual item that Maloney has acquired: a pair of deer antlers.

All Banned Booty works reside in the permanent collection of the Museum of Flight in Seattle, following their exhibition there in 2004.

Then there’s Naughty Booty, a free-form resin sculpture of items such as phallic cigarette lighters and a pair of faux leopard skin handcuffs — highlighted by neon fiber optics and slashes of paint surrounded by Fellini-inspired, X-rated pencil drawings of males and females. "The piece is very Pop — a sculptural reminiscence of a 1950s-era Las Vegas pinball machine or a kitschy, cheesy bar tabletop," Maloney says.

Maloney constructed his Frank Stella-inspired collages — a series called This is Where the Rubber Meets the Road — with pieces of hoods, side panels, and roofs of NASCAR automobiles, as well as strips of tire rubber. A three-time Baja Mexican 1000 racer, Maloney calls the twisted tangle "a giant Wheaties box that has exploded."

The supercharged artist also created oversized acrylics on canvases based on photographs he took of theater marquees and crowds on the sidewalks. The Broadway series pays a humorous Red Groom-esque homage to the Great White Way in colors that capture Manhattan’s vitality, energy, and tempo in perfectly timed squares.

To understand Maloney’s obsession to create, one must travel back to the years he spent in his native Kalamazoo, Mich., where he owned a men’s specialty retail shop and, later, a machine-tool manufacturing company. Somewhere in the running of a business emerged moments of creativity — even more so than the years he studied art at the American School in Lugano, Switzerland.

"My creative juices were running all the time," he says. "I bought most of the clothing and furnishings from swatches, so I had to make choices about colors and forms and textures. There was creativity in that I was marketing new products, making decisions on how to add on and expand. In the manufacturing of metal, I’d question how things came to life from a blueprint. Things would be complicated, and I wanted to make them simple."

Maloney’s creativity, however, surfaced even before that.

"My mom and dad painted as a hobby," he says. "They started a small business called The Chocolate Shop. Next door, they opened an art gallery — the first in the area at that time — to show their work, as well as the work of others. I’d go over to the studio and dabble."

A major turning point in his life came after he and his wife had done some remodeling on their home in Smoke Tree Ranch in Palm Springs. "We were having a cocktail party, and I decided to hang one of my paintings on the wall," Maloney says. "I had started to build up a portfolio, and I was having fun. Hanging up the painting was saying, ‘Look at what I made.’ I liked what I did, as did some of the people who came to the party."

Since then, Maloney has filled his Smoke Tree home — a house handed down from his grandfather to his father to him — with his and his wife Yvonne’s works, as well as the works of artists he collects. The house next door functions as a working studio, guest house, and the "Maloney Museum" with eight rooms of art by the Maloneys, Peter Max, Viola Frey, Fletcher Benton, and Jeffrey Lunge. The garage houses a sampling of his parents’ works.

Because there are no street names within Smoke Tree Ranch, Maloney dubbed the museum/studio Rock 6 Studios because it sits alongside the sixth boulder up from the gated community’s main entrance. The Maloneys’ works also are displayed in The Maloney Gallery in the historical La Flecha building in Rancho Santa Fe, a space they opened in 2002.

It’s not enough, Maloney says. He wants a continuous stream of visitors looking at the art.

Meanwhile, he has 2,000 pounds of contraband in a storage unit in San Diego — more than enough to complete 10 more Booty projects. One day he wants to reunite some of the confiscated items with their owners. "Most of the Swiss Army knives have the name and phone number of the owner," he explains. "I am thinking of calling them and reuniting them."

"Art is a constant adventure for me, a constant presence of discovery," says Maloney, whose work ranges from $500 to $125,000. "I want to create art that has an impact."