Airstream Clipper Really Hasn't Changed Much in Over 80 Years

Times change. Tastes change. Technology changes. As a result, so do our vehicles. I’ve learned after 24 years of reviewing auto-mobiles exactly how quickly and considerably everything on four wheels undergoes
a makeover — which makes it odd that an object the size of a small house can remain desirable and relevant for decades without significant alterations.

Reclining in a lounge chair alongside the 2019 Airstream Classic trailer that’s serving as my home for the weekend, I marvel at its gorgeous, unpainted, riveted aluminum and stainless steel body, cast in the slightly golden shimmer of the setting sun. It’s a familiar form yet still feels avant-garde 83 years after founder Wally Byam first put his aircraft-inspired Airstream Clipper trailers on the road in 1936. Besides the Zippo lighter and Le Corbusier’s LC4 chaise, I can’t think of many successful products that have changed so little over so much time.

“Let’s not make changes; let’s only make improvements,” Byam memorably said — a mantra that served to lock in Airstream’s signature riveted metal forms for decades. There have been only two major updates since its inception: In 1969, the trailer’s sloping rear end became more ellipsoid; in 1994, it expanded almost half a foot wider and gained interior upgrades. Otherwise, Airstream’s evolution is marked by minor but effective improvements — larger onboard water tanks, clever storage areas, sexier wheels, LED lights, and so forth. And while production has moved from Los Angeles to Jackson Center, Ohio, each is still built by hand.

The reason Airstreams have enjoyed enduring appeal while other transportation devices have changed so vastly could be good fodder for a graduate-level design thesis. I reckon it has something to do with cars and trucks supporting various day-to-day activities and therefore more closely reflecting the ever-changing social, economic, and geopolitical trends. Meanwhile, the reasons folks use trailers like the Airstream — namely, relaxing and adventure — have largely stayed the same, rendering evolution for this particular species less, well, urgent.

If nothing has changed, why exactly am I up in Paso Robles, California, sipping a glass of wine from one of the local wineries and munching on charcuterie that had been sent over by the Cava Robles RV campground where Airstream placed this 30-foot-long metal capsule for me to evaluate? Well, first and foremost, to do what RVs are designed to help people do: kick back, unwind, decompress, and in so doing, gain an understanding of the Airstream’s latest abilities.

I confessed to Airstream’s public relations team that I’m more comfortable driving a $150,000 sports car at 200 mph on the Autobahn than backing a $150,000 trailer up at 0.5 mph into a campground slip, so we agreed it’d be best if I drive myself to the Airstream rather than attempt to finagle the 4-ton beast myself. 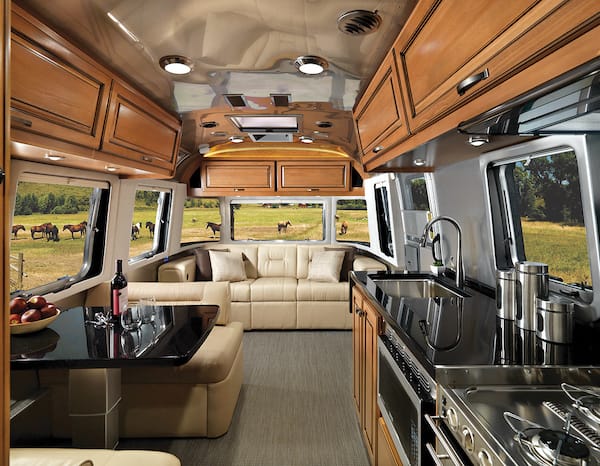 The new Airstream Classic has Smart Control technology to operate common functions with a smartphone app.

Therefore, I can’t report on the effectiveness of the trailer brakes, its resistance to crosswinds, or the usability of its rear-view camera. Ditto on the illuminated power hitch jack or the electronic fore/aft and side/side levelers. Pampered housecat status: attained. If I had to do it over again, I might have opted to drive something a bit hardier than the curvaceous, charcoal metallic Lexus LS500 sedan I was testing for a separate story that week because nothing says “I’m too precious to tow my Airstream” like having it fully stocked and pre-positioned at the RV park before you arrive in a $115,000 luxury car.

I was interested in experiencing the new Smart Control technology that Airstream is including on its flagship 30- and 33-foot Classic models. At its core are a new Airstream app and 4G LTE connectivity that bring most of the system functions to my phone. While many of these features were offered before, now I don’t have to stand up from my cozy spot on the power reclining sofa and walk a few feet to a wall panel to adjust anything. Best of all, it was easy to learn. In an hour, I went from having never been inside an Airstream to understanding how to turn on and adjust pretty much everything.

Similar to Wi-Fi–enabled home climate and security systems, Airstream’s smart controls allow users to dim the lights, adjust the air conditioner settings, activate ventilation fans, and raise and lower the powered awnings with their phone. For models with the optional power window shades, it can raise and lower those, too. Simply want to check the onboard water, propane, and battery levels or the inverter status? Forget peeping at a physical gauge on the trailer. The app conveys it all wherever you are in the world. Similar to how automotive apps help drivers locate their sport sedan in a parking lot packed with 1,000 giant Toyota Sequoias, the Airstream app can help users locate their trailer in a 1,000-acre park populated by actual sequoias. And because it’s possible to get a little lost inside the trailer — whether that’s while trying to understand how something works or learning what “inverters” actually do — the app features a digital version of the owner’s manual, as well as one-touch connection to customer service and roadside assistance. I’m a little surprised that the tech suite doesn’t include a doorbell camera and remote lock. When I’m trying to relax, I kinda want to know who (or what) might have shown up at my door before I open it. Stay tuned. I bet that’s not far off.

I can’t quite figure out the trailer’s integrated Polk home theater system — but honestly, because a Sonos Play:1 speaker system with Alexa had also been placed in the main space, I don’t need it. You can add additional Sonos speakers to expand the listening area to other rooms and outside, but the Sonos system isn’t accessible through the Airstream app. The same goes for the large, swiveling Samsung smart TV installed above the dinette area (which also features a motorized table that can drop down to the level of the bench seats on either side to become a full-size bed).

Otherwise, the Classic is as, well, classic as ever. The furnishings are top-notch and surprisingly slick. Small screens or backlit stainless steel button banks control the lights or the motorized beds in the event that you don’t want to use the app. Between the 30- and 33-foot Classics, the 30-foot design is my favorite, as it places the main living area up front and the private bedroom (with a choice of two twin beds or one queen bed, both motorized) in back, wrapping both spaces in large bay windows that offer an expansive view of the surrounding areas. The kitchen and bathroom are fully equipped with modern amenities rendered in approximately three-quarters scale. Believe me, I put them all to use. Personally, I think it’s time for another interior upgrade, or at least a broader range of material choices than the four track-home-inspired color combos offered now, though Airstream deserves credit for upholstering the seats with “Ultraleather” so soft it can’t be legal and coordinating everything from the countertops to the bedding and even the throw pillows. The interior selections lack anything to match the sleek, simple character of the exterior. After all, my favorite part of the experience is opening my eyes each morning and seeing the curved metal ceiling above me, reminding me that I’m waking up in an Airstream.

But who am I to question the decisions of a company that has done so masterful a job cultivating its signature products from the Great Depression into the 21st century? Airstream’s evolution continues with the introduction of the Smart Control technology, which Walter Byam would certainly agree does not change the Classic trailer but improves upon it, so owners can quickly put down their phones and enjoy the great outdoors.