The Cree House is Frey’s most intact residential work, aside from his own home. For Modernism Week, Mark Davis of Modern Home Design outfitted the house with midcentury modern furnishings, art, and objects.
PHOTOGRAPH BY LANCE GERBER

Albert Frey blew into Palm Springs in the fall of 1934. He was barely 31, all limbs and ideas, eager to leave an imprint out West. The Swiss-born architect arrived by way of New York, where he turned down a partnership deal from his former boss, Philip Goodwin, to drive across the country and study the shifting landscape of American architecture. (The pair would later collaborate on the design of the Museum of Modern Art building in Manhattan.) It was the hottest year on record, and newspaper headlines heralded ominous dust storms throughout the heartland, but that didn’t stop Frey from fleeing the bustle of the Big Apple, eyes fixated on the magnificently barren California desert. That was Frey. He’d lived in three countries before landing at Ellis Island in 1930. Until he settled in Palm Springs, the wunderkind didn’t stay anywhere long.

Frey’s actual partner and former East Coast housemate, A. Lawrence Kocher, had a brother, J.J., who’d taken up residence in the Coachella Valley two decades earlier. A retired physician, J.J. started a real estate development and insurance firm and needed an office. Kocher and Frey heeded the call with a bilevel cube of a building, finished in 1934, geometrically reflecting the slow-stepping horizon line of the surrounding San Jacinto Mountains. It was stark white, a severe departure from the existing brick storefront that J.J. had built with help from the indigenous Cahuilla — and  was among  the first International Style buildings in the nascent resort town of Palm Springs. 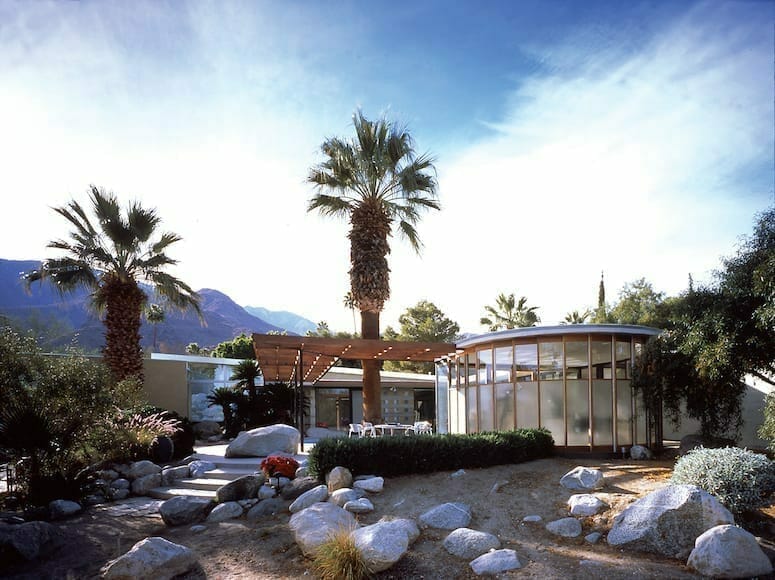 The Coachella Valley wasn’t barren in the 1930s. Hollywood was here. While Frey was constructing the Kocher-Samson Building, a mile and a half away, actors Charlie Farrell and Ralph Bellamy were at work on The Racquet Club. The palatial Dunes Club casino opened that year, too; founded by Detroit mobster Al Wertheimer, it was the type of place you might run into Clark Gable or Errol Flynn over French 75s at the bar. Frey was dazzled by “the intellectual milieu in Palm Springs,” as he described it in a 1936 letter to his mentor, Le Corbusier. It was the juxtaposition between civilization and “a wild, savage, natural setting” that enthralled him, Frey wrote. When Kocher returned home to New York, Frey stayed. Rustic ranch houses and Spanish and Mediterranean Revival architecture dominated the scene in the desert, and this bright-eyed dreamer was about to start a movement that would become known as Desert Modernism.
Frey focused on form. His minimalist design philosophies upheld values of sparseness and efficiency while also achieving a poetic (and oft-mimicked) symphony of structural material, sunlight, color, and nature. Rising triumphantly from the rugged landscape, Frey’s long, linear designs strike a balance between technology and terrain, indoor living and out. 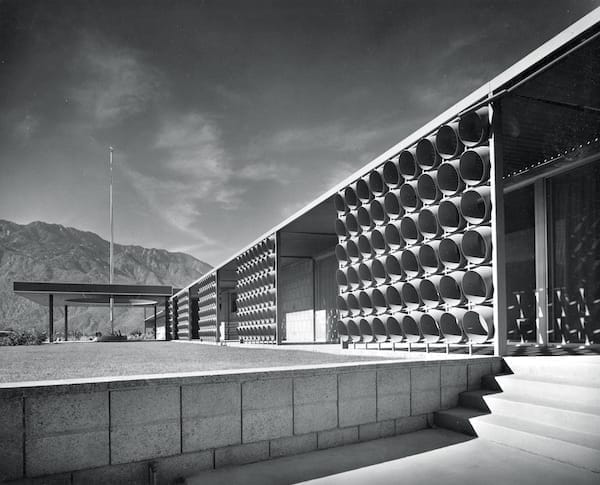 He was known to use affordable industrial materials of aluminum, glass, concrete, and steel, and his color palette most often reflected what he saw beyond the window panes, like the seasonal yellow of the brittlebush blooms that blanket the desert each spring.

Save for a short return to New York in the late 1930s to assist Goodwin with MoMA, Frey made Palm Springs his home until his death in 1998 at age 95. During his six decades in the Coachella Valley, he practiced for almost 20 years with fellow modernist John Porter Clark and collaborated with many local designers and builders. His prolific career spans more than 200 building designs, including the Aluminaire House (1931, with Kocher — originally built in New York, soon to be reconstructed in Palm Springs); the Raymond Loewy House in Palm Springs’ Little Tuscany neighborhood (1946, with Clark); Palm Springs City Hall (1952, with Clark, Robson Chambers, and E. Stewart Williams); the North Shore Beach and Yacht Club overlooking the Salton Sea (1959); and the iconic Tramway Gas Station that marks the northwest end of Palm Springs (1965, with Chambers — now the Palm Springs Visitor Information Center). 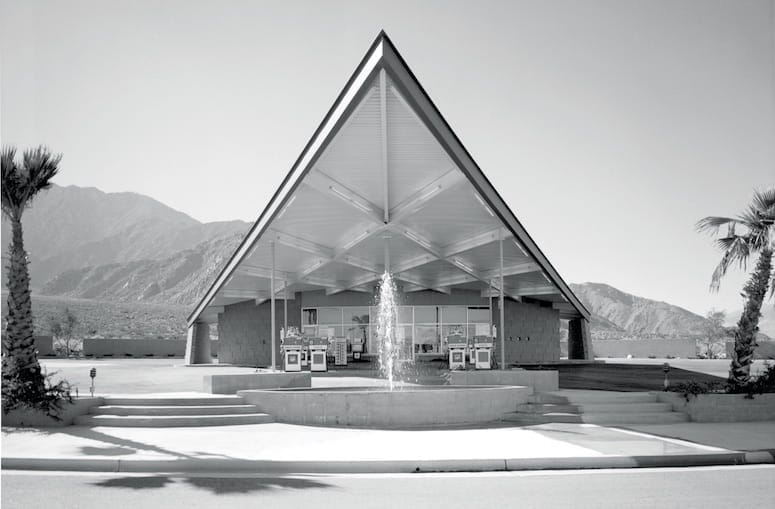 The architect’s sleek vision of living environments left an indelible imprint on the area and put this desert at the center of the international modernist map. He is among the reasons events like Modernism Week exist. The Greater Palm Springs architectural festival, established in 2012, has seen attendance numbers climb from 12,000 during its inaugural year to 162,000 in February 2020. Frey’s work is featured regularly during the event, and this year is no exception. From Feb. 17 to 27, a limited number of in-person tours will be held at two of Frey’s most intact and impressive residential buildings — the Cree House and Frey House II. 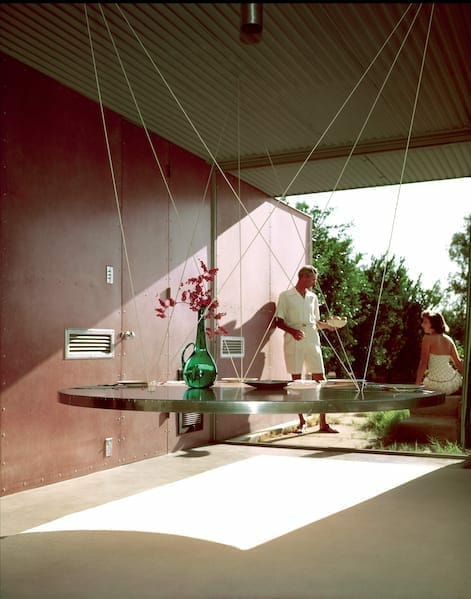 Twenty years after completing the Kocher-Samson Building, Frey designed a 1,124-square-foot hillside abode for Raymond Cree, a local civic leader and former Riverside County school superintendent. Frey was fresh off a two-month tour of Eurasia. He had lived through a second World War, a six-year marriage, and a divorce, and as Joseph Rosa describes in his book Albert Frey, Architect, the — by this time, established — modernist master was entering a new phase in his career. Where past projects would have nestled quietly amid flatter outcrops, the Cree House dares to ride the edge of the mountain and even project off of it with a 600-square-foot deck wrapped in yellow corrugated fiberglass panels. A series of steel columns, known as pilotis, supports the structure and minimizes the overall impact to the land.

The design calls to mind Villa Savoye, a residence on the outskirts of Paris, France, that Frey assisted Le Corbusier with during his 10-month tenure in 1929, and it hints at more venturesome builds to come. Today, the well-preserved Cathedral City home appears very much the same as it would have when Cree, then in his early 80s, moved in. After decades shrouded from public view, the two-bedroom, two-bath property underwent a meticulous restoration and was unveiled to great acclaim during Modernism Week 2019.

In the living room, just off the entrance, a pair of floor-to-ceiling glass sliders flank the focal point fireplace. The prominent feature extends through the horizontal plane of the house and fuses to the hillside below. Frey and Cree designed it using stones excavated directly from the site. One slider opens to the formal front patio, which cantilevers over the driveway, doubling as a carport; the other to an informal gathering spot situated in the rocks. 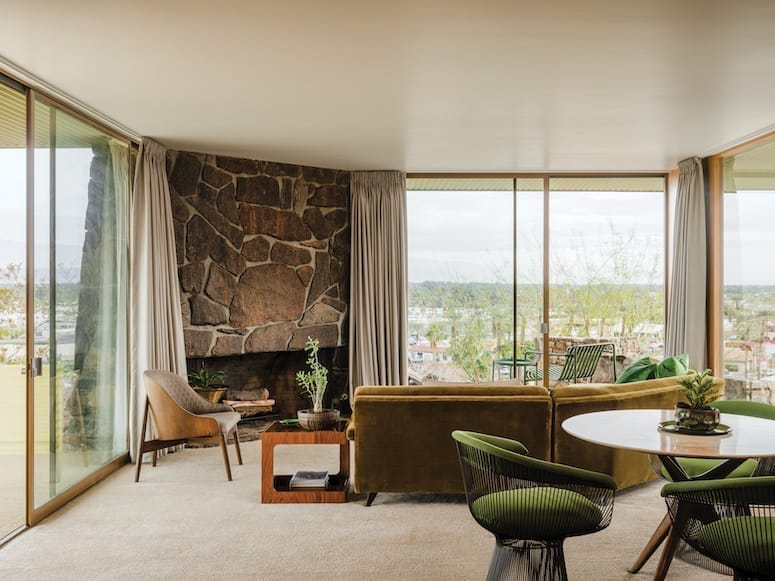 In the living room, just off the entrance, a pair of floor-to-ceiling glass sliders flank the focal point fireplace. 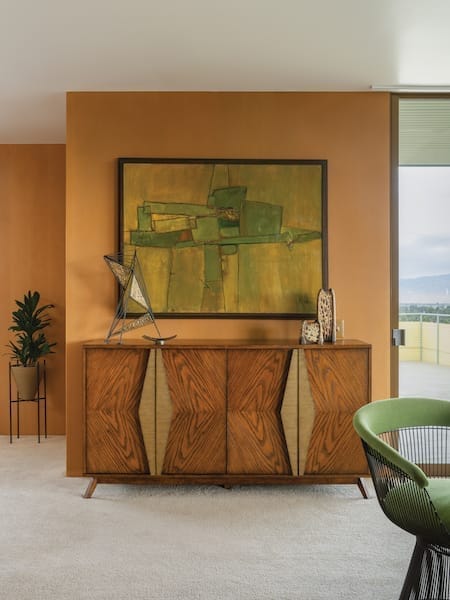 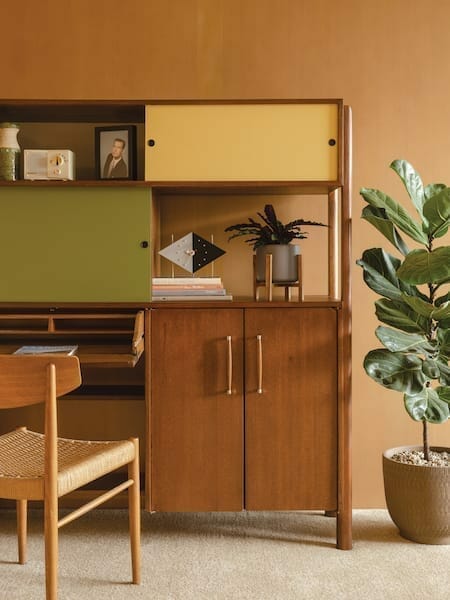 A pass-through window in the kitchen allows conversation to flow through the house. It also frames a view of the original 1950s appliances, which have been painstakingly brought back to working order — a three-panel refrigerator from General Electric that’s fixed to the ceiling, installed to look like upper cabinets, and a Western Holly gas oven with a porthole window.

Rich shades of caramel, copper, and beige, lifted from the natural palette of the mountain, spill inside onto wood-paneled walls, cabinetry, carpet, and even the appliances, visually blurring the line between indoors and out. On the exterior, sage green paint camouflages the asbestos-cement siding, providing a fairly neutral backdrop for that pop of yellow on the deck. The result is a building that seems at once at odds and harmonious with its environment, an aesthetic choice that typifies the Desert Modern style. 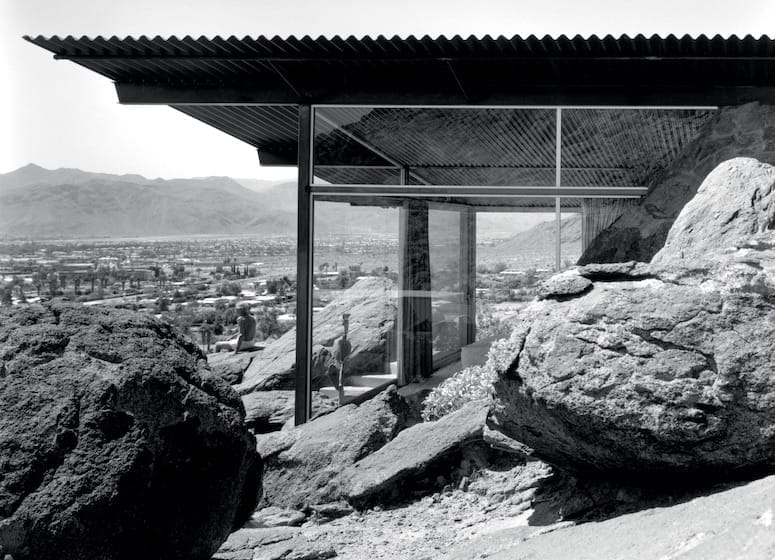 If the Cree House respects its location by levitating above it on pilotis, Frey House II does so by safeguarding Mother Nature indoors. The architect’s 800-square-foot personal home — his second in the desert, where he lived until he died — is recognized for numerous design feats. Arguably, the most visually striking is the massive boulder jutting through the glass wall at the rear of the house; it serves as a divider between the shared living and sleeping areas. The most awe-inspiring, though, is the intentionality of Frey’s site selection and the subsequent sun study that he conducted prior to breaking ground. 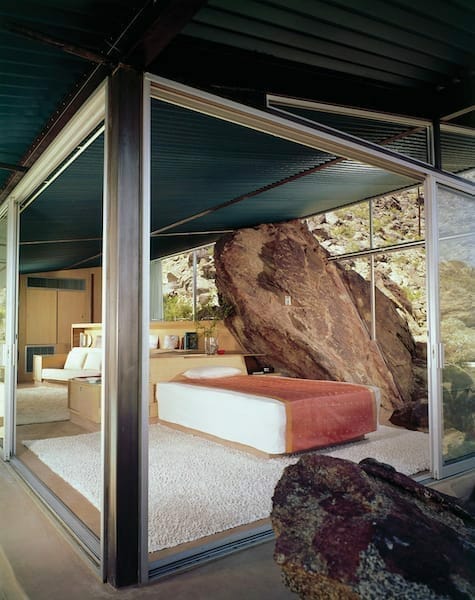 © J. PAUL GETTY TRUST. JULIUS SHULMAN PHOTOGRAPHY ARCHIVE RESEARCH LIBRARY AT THE GETTY RESEARCH INSTITUTE, LOS ANGELES.
Frey began his search for a lot in 1958 and took five years to find it. He chose this site at the base of Mount San Jacinto, 220 feet above Palm Springs, largely because of the natural outcrop that he incorporated into the design. Once he’d settled on the location, Frey took another 12 months to track the movement of the sun using a 10-foot pole; this helped him determine the best sightline for each window and position for each gathering space.
The build finally began in 1963 with the construction of a retaining wall. Made of poured concrete and concrete block, it extends from the house to create a front patio that cradles one of the most picturesque pools in Palm Springs. As with the Cree House, there is covered parking below. To address the natural slope of the lot, the single-story home splits into two levels separated by a few stairs. The lower level houses the galley kitchen and combined living and sleeping areas; the upper level includes the bathroom and a multipurpose dining/drafting table. Built-in furnishings make the most of modest quarters — there is plenty of added storage, including a safe concealed behind his bed, and unique personal touches like a pencil sharpener below the drafting board and a built-in turntable by the sofa. In 1967, he added a 300-square-foot addition off the kitchen to serve as a guest room. 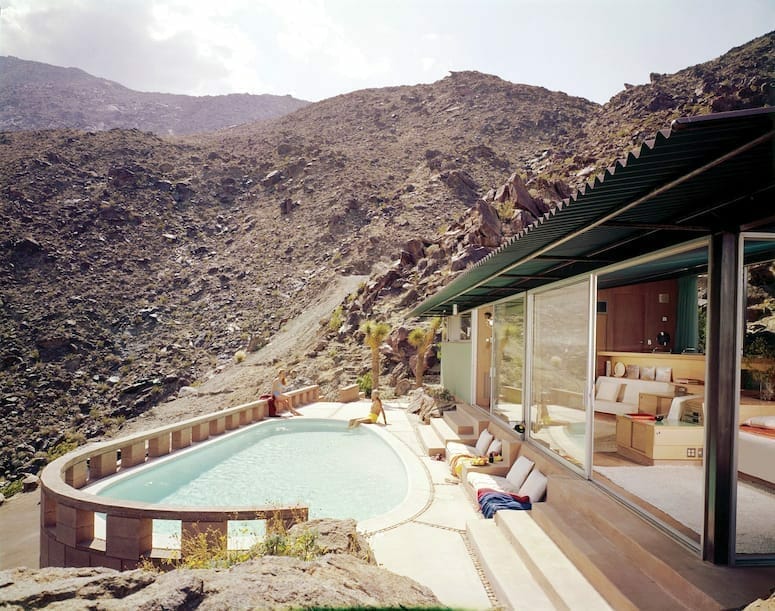 Looking at this project within the context of Frey’s continued creative evolution, Frey House II is a true ode to the wild. Its steel bones are enrobed in glass, front and back, inviting close encounters with the neighbors — coyotes and quail and the occasional bighorn sheep. The architect befriended a foot-long chuckwalla lizard that lived there as long as he did. 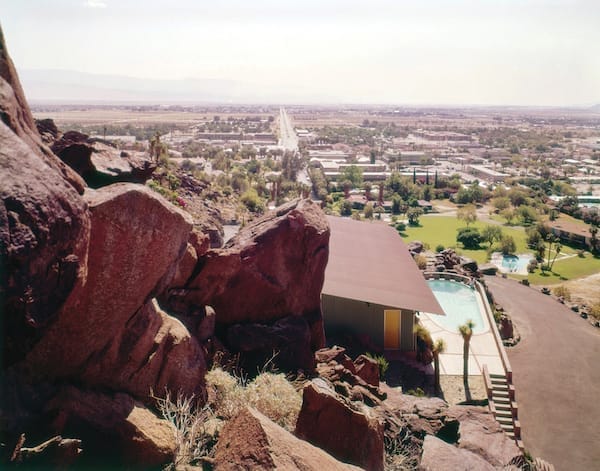 Frey observed the valley from this perch for 34 years. In March 1995, at age 91, he sat down at his home with Jennifer Golub, co-author of the monograph Albert Frey House 1 + 2. Golub was taken with how little had changed in the home since its fabrication in the ’60s. It had the same brittlebush-yellow curtains, the same built-in furniture, and the same Swiss cowbell hanging at the entrance.

“You haven’t even acquired anything,” Golub told Frey. “Would you do anything differently if you were to make the house today?”

“I really haven’t thought about it,” the architect replied. “It’s pretty much the way I like it.” And decades later, Frey would be pleased to know that it still is, now under the care of the Palm Springs Art Museum.

• READ NEXT: Learn More About the Restoration of the Cree House. 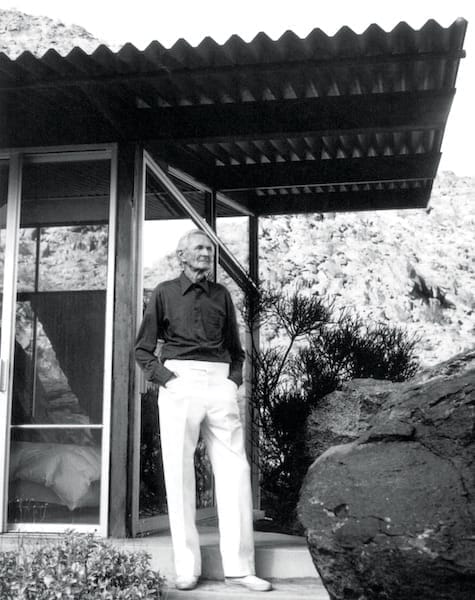 Tour Frey House II and The Cree House during Modernism Week, Feb. 17–27. Properties are accessible only by shuttle, and space is limited. For more information or to purchase tickets, visit palmspringslife.ca/freyxfrey.

Who Made it Happen: