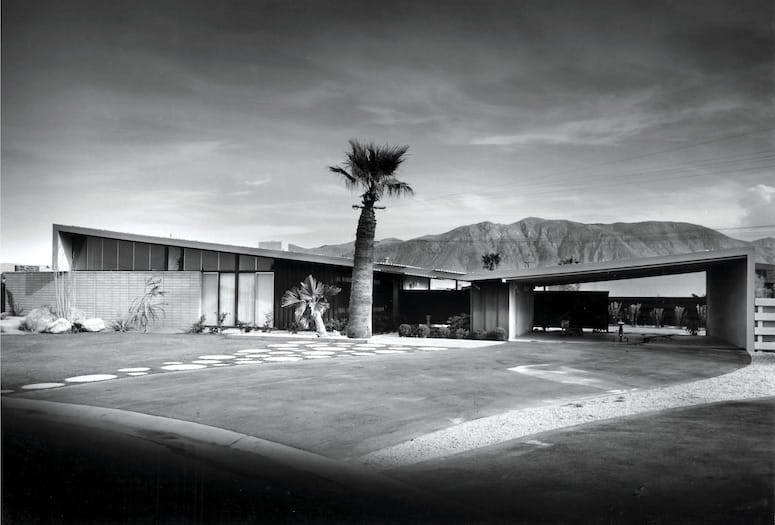 The Alexander family brought an entirely new dimension to midcentury Palm Springs. Yes, they were glamorous, but the town already had Hollywood movie stars. They were philanthropists, but so were our wintering plutocrats. New was the Alexanders’ blend of business savvy and great architecture. They did as much as anyone to transform the city into the mecca of modernism we know today.

Alexander Construction Company was a family affair: father George, his wife Jimmie, son Robert, and his wife Helene. Today, their name is one of the most recognizable in Palm Springs. When locals casually mention, “I live in an Alexander,” anyone with a passing knowledge of midcentury modern architecture knows exactly what that means: an exposed post and beam structure with clean and elegant lines; an open floor plan modeling the casual, quintessentially Californian lifestyle; outdoor spaces blending with indoor spaces so residents could revel in the climate; and spectacular scenery.

Dig a little deeper, though, and the popular culture fame of “Alexanders” reveals an even more important aspect of George and Robert Alexander’s achievements. Most of Palm Springs’ masterpieces — Richard Neutra’s Kaufmann house, John Lautner’s Elrod house, and Albert Frey’s Frey II — were custom-designed for a specific client and a specific extraordinary site. In contrast, an Alexander is a modern house for the rest of us, the average homebuyer. It was mass produced and marketed, so the design had to appeal to a broad range of customers. It had to be built efficiently and economically. And it still had to be marvelously modern. That’s what the Alexanders brought to Palm Springs.

They were pragmatic builders who kept a close eye on the bottom line, not avant-garde theorists exploring radical architecture. But when they hired genuine architectural talents like William Krisel and Donald Wexler, they discovered that modern architecture was more than a style; it was a method of translating practical demands into excellent design.

That attitude set Alexander Construction Company apart from most homebuilders in Southern California after World War II. Almost anyone could get into the business and make money then. Shoe merchants, accountants, egg salesmen, and haberdashers who knew nothing about construction (let alone architecture) jumped on the home building bandwagon that fed the public’s insatiable hunger for new homes — and a fresh start on life after the Depression and the war.

At first, George, also a former accountant, wanted nothing to do with modern architecture. He was different from Joseph Eichler, another homebuilder of modern tract homes, who zealously took up the style after living in a Frank Lloyd Wright house. His “Eichlers” became as synonymous with modern tract houses as “Alexanders.”

Since 1940, George had done well building conventional ranch house tracts in the San Fernando Valley. Bob, the only child of George and Mildred, aka “Jimmie,” left the University of Southern California in 1946 and joined the family business. 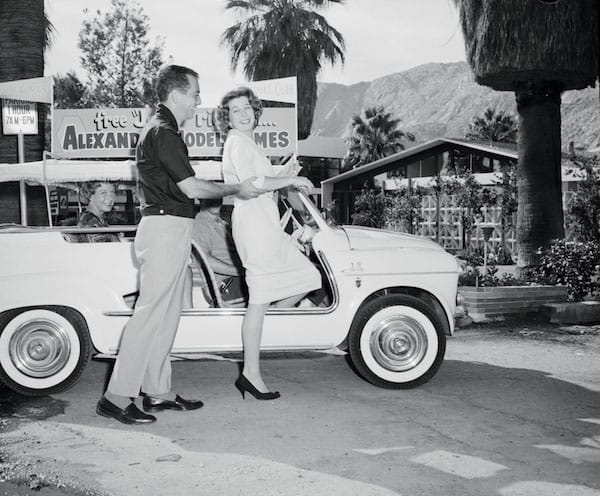 Then, Bob met Krisel. Both were in their 20s and interested in new ways to improve the future. They pestered George to let them design a modern tract. George resisted. Why tamper with a proven formula? Finally, he relented and allowed them to design a small tract in the Coachella Valley. When it not only sold well but proved less expensive to build per square foot, even George became a modernist.

One more piece had to fall into place for the Alexander Construction Company to meet its destiny in Palm Springs. In the early 1950s, George and Jimmie had moved here for his health. Looking around, he sensed an untapped market for mass produced housing, especially in second homes.

George and Bob launched the first Alexander development in Palm Springs — a 90-home tract called Twin Palms Estates on the less developed south side of town in 1957. Designed by Krisel, it was a model for everything we now identify with Alexanders: simple lines, post and beam structures, open floor plans, a pool in each backyard, and two palm trees out front.

Each house was an identical 40-by-40-foot plan, so Bob could control the cost of construction, labor, and materials. Krisel designed each floor plan to be flipped or rotated, and each house to have a different roofline — flat, sloped, gabled, or butterfly — to avoid the cookie-cutter look of conventional housing tracts. 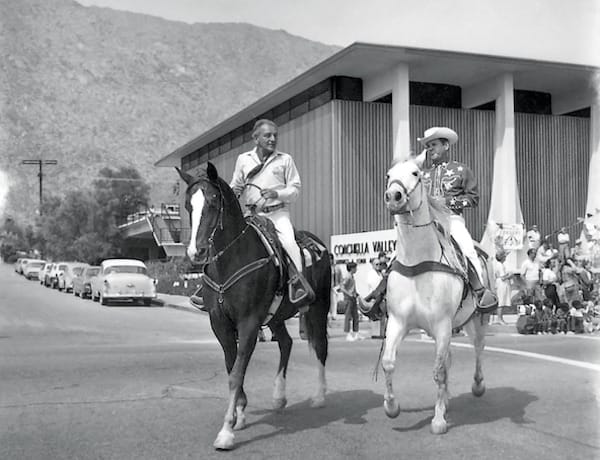 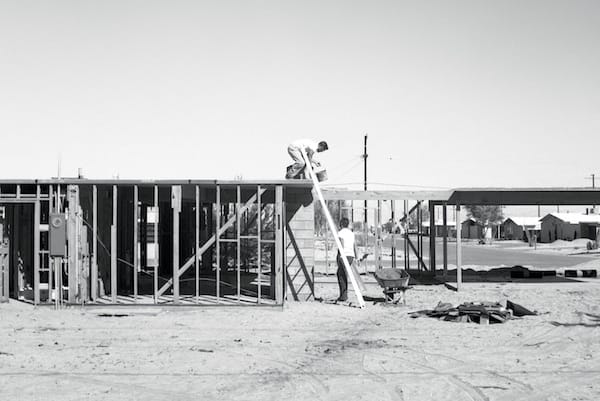 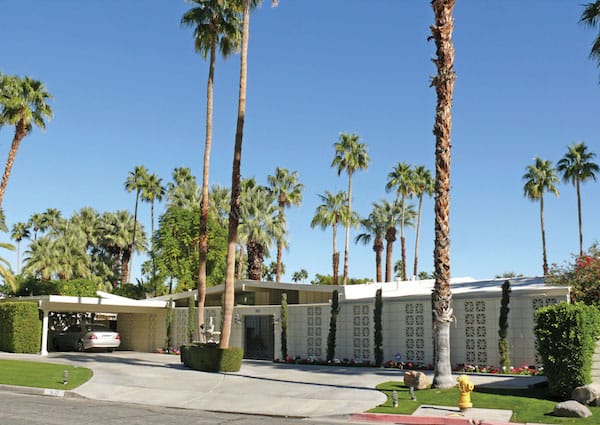 Twin Palms was a success, and the Alexanders went on to build a dozen neighborhoods totaling more than 1,200 homes in their 10 years building in the desert. They varied according to the market or site. Racquet Club Road Estates’ 360 houses were smaller than Twin Palms, but equally modern. The 325 Alexanders in Vista Las Palmas were larger — with a maid’s room — and more expensive as part of the fashionable Las Palmas neighborhood. Krisel designed the initial models, but the Alexanders and their partner Joe Dunas hired architect Charles DuBois to design other models. His distinctive A-frame entries earned them the “Swiss Miss” nickname.

By the early 1960s, the Alexanders had confidence in the potential of modern architecture, and they took another, even bolder step. Their previous houses had all been wood construction. Now, they would try steel.

The Alexanders hired Donald Wexler and Richard Harrison to design an all-steel house for mass production. This was not as simple as replacing wood posts and beams with steel posts and beams, but the two Palm Springs architects had experience using the CalCor steel system with engineer Bernard Perlin to cost-effectively build schools in Palm Springs. 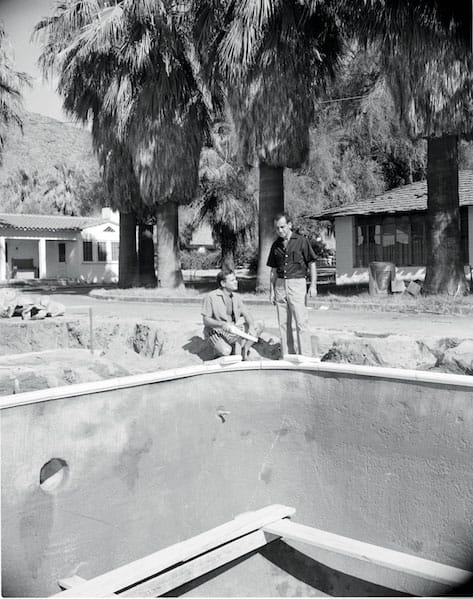 Robert Alexander and an unknown gentleman.

They applied the same system to the houses: steel walls, roofs, and a central kitchen/bathroom core were fabricated in a factory and shipped to the site, where a crane lifted them into place on a concrete slab within days. It was, in effect, an assembly line like any in Detroit. 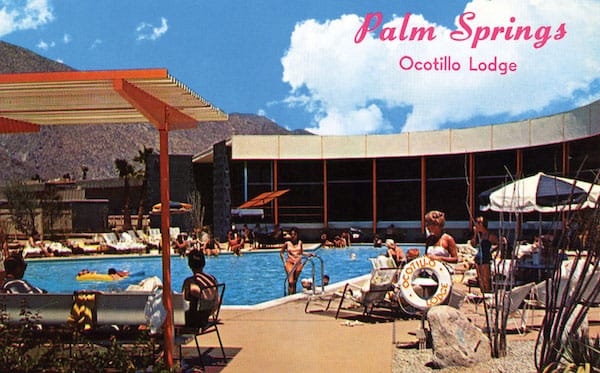 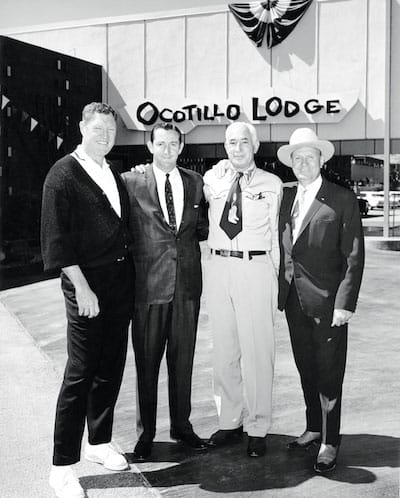 Wexler took advantage of this ultra-modern system to shape the open plans and light-filled spaces that were hallmarks of Alexander houses. But an unanticipated spike in the price of steel halted the visionary experiment; only seven of 35 planned houses were built. Today, they are prized examples of Palm Springs modernism.

Into the 1960s, Alexander Construction Company kept expanding. It owned a controlling interest in the iconic Racquet Club, and prepared to update and improve it. They bought downtown’s historic Desert Inn hotel from screen star Marion Davies, and considered building a modern hotel. They planned condominiums and commercial buildings. They had already built 1,200 homes, and their plans for Palm Springs were bright.

Thus, it was a tremendous loss to their family, friends, and the future of Palm Springs when George, Jimmie, Bob, and Helene were killed in a plane crash November 14, 1965, after taking off for Los Angeles. Only Helene and Bob’s daughter, 11-year-old Jill, had been left behind.

Innovative architects like Krisel and Wexler typically had a tough time selling modern architecture to their builder clients. In Bob, they found a receptive ear and an eager collaborator. The Alexanders proved that good design was good business. That has made all the difference for Palm Springs.

Robert and Helene Alexander in a photograph in the September 1962 issue of Look magazine in the “House of Tomorrow,” now known as the Elvis Honeymoon Hideaway.

Look magazine featured Robert and Helene Alexander as the quintessential “New Californians” in a 1962 article. Often photographed dining out at popular restaurants, Helene was particularly fashionable in chic eveningwear in the style of Jackie Kennedy.

The Alexanders were all prominent in Palm Springs society, especially after Bob and Helene moved here permanently in 1958. They gave their time to civic committees, hospitals, the World Adoption International Fund, and the Boys Club, and supported charity events (including the Desert Circus.) Robert rode with the Desert Riders and Los Compadres.

The Alexanders’ Own Homes

Besides building modern, the Alexanders lived modern. George and Jimmie hired noted Los Angeles architect Edward H. Fickett to design a handsome modern house on Vista Chino in 1951; comedian Jack Benny later bought the house. When they built the Ocotillo Lodge in 1956, they had a two-story unit with a private pool.

Robert and Helene moved into one of their Twin Palms homes when it opened in 1957. Later, as a surprise for Helene, Robert had William Krisel design “The House of Tomorrow” in Vista Las Palmas. A long built-in couch ringed the circular living room, focused on a suspended metal fireplace, and the circular kitchen had built-in appliances and a circular counter island — so appealingly modern that Elvis and Priscilla Presley rented it a few years later as their honeymoon hideaway.

Palmer and Krisel
Los Angeles architect William Krisel was Robert Alexander’s guide through the unexplored territory of modern tract architecture. Krisel and partner Dan Palmer met while working in the office of Victor Gruen in the late 1940s. In 1950, they opened their first office in the unfinished basement of a Rudolph Schindler apartment house. While they worked with many homebuilders, the Alexanders were the most willing to try new ideas.

Wexler and Harrison
After Don Wexler graduated from the University of Minnesota School of Architecture, he traveled to Los Angeles to meet his hero Richard Neutra. Pretending to be seeking a job as an excuse to meet him, he was surprised when Neutra, one of the most famous architects in the world, offered him a job on the spot. He accepted, working on key Neutra projects such as the Chavez Ravine public housing development. After a year, he took a job with William Cody in Palm Springs, where he met Richard Harrison. The partners designed private homes, schools, gas stations, commercial buildings, civic buildings, and banks.

Charles Du  Bois
Rochester, New York, native Charles Du Bois studied at UCLA and MIT before settling in Los Angeles, where he designed housing tracts, closer in design to the conventional ranch houses being built throughout the San Fernando Valley at the time than the modern designs of Palmer and Krisel. When Alexander partner Joe Dunas tapped him to build in Vista Las Palmas, he easily adapted to the simple lines associated with Alexander houses. One of his San Fernando Valley tracts can be seen in the Bob Hope–Lana Turner comedy, Bachelor in Paradise. 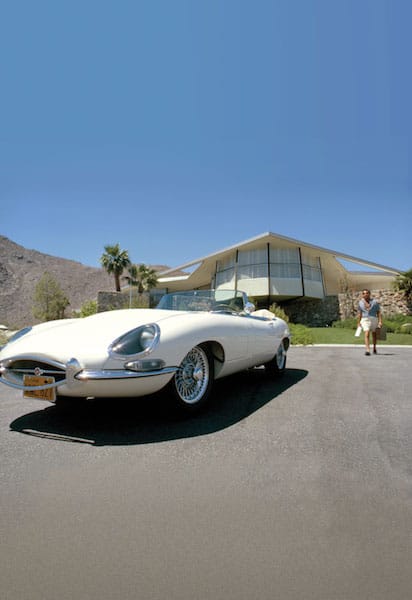 Twin Palms Estates
Every house originally had an identical 1,600-square-foot floor plan. Architect William Krisel avoided the cookie-cutter appearance by rotating the houses on their sites and giving each a different roof design.

Racquet Club Road Estates
Next to the Racquet Club, this tract had plans for smaller, 1,225-square-foot homes that retained the sleek modernity of Twin Palms.

Steel Houses
This was the Alexanders’ most daring design, by architects Donald Wexler and Richard Harrison. Each of the seven homes build used steel walls, roofs, and a prefab core of kitchen and bathrooms manufactured in a factory and constructed on site.

Ocotillo Lodge
The Alexanders’ first project in Palm Springs, designed by Krisel, was built so that potential homebuyers visiting nearby Twin Palms Estates would have a convenient place to stay.

Learn More About the Family at Modernism Week

Visit modernismweek.com to attend these events.

If you would like to tour some outstanding Alexander homes, the 'Give Me Shelter - Rescued Alexanders Home Tour’ will be offered Feb. 14 four times from noon to 1:30 p.m. At one time overlooked, these “rescued” and tastefully restored Alexander constructed homes are some of Palm Springs finest examples—inside and out. $65 per person.

The Alexander family will also be honored with a star on the Palm Springs Walk of the Stars on Feb. 14 at 2 p.m. at the Palm Springs Art Museum Architecture and Design Center.  This is a free event and open to the public.