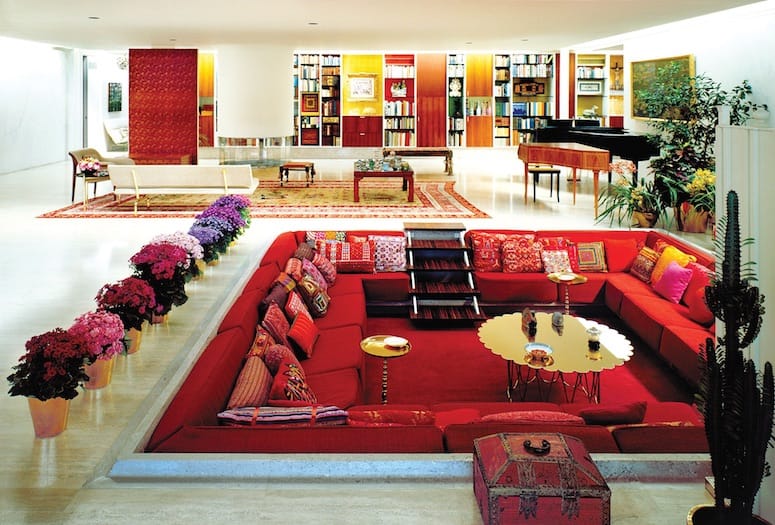 The Alexander Girard-designed conversation pit at the Miller House in Columbus, Indiana.
PHOTOGRAPH BY BALTHAZAR KORAB/ COURTESY THE LIBRARY OF CONGRESS

Having invented — as a child — a society replete with flags, bank notes and coins, passports, maps, postage stamps, coats of arms, history, and language, Alexander Girard as an adult seemed primed to create fabrics for Herman Miller, fashion residential and corporate interiors for billionaires and high-profile businesses, remodel a downtown street with new façades, overhaul the corporate image of a major airline (Braniff), and design exhibitions for showrooms and museums.

Girard, who died in 1993 at the age of 86, once said, “I believe that if you put objects into a world which is ostensibly their own, the whole thing begins to breathe. It’s creating a slice of life in a way. Then the exhibit becomes alive; it becomes theater.” 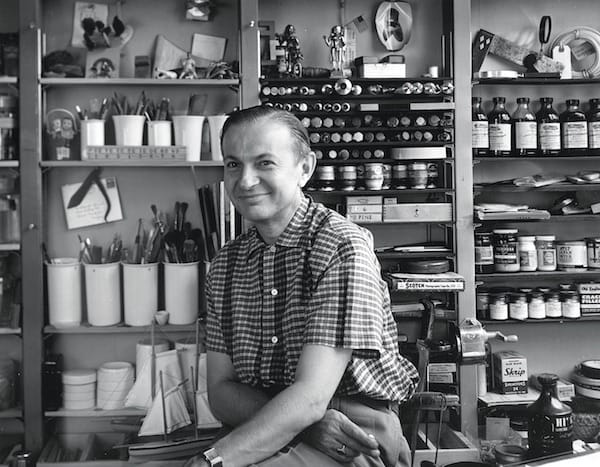 Girard in his studio in the early 1950s

So it is that A Designer’s Universe includes textile samples and furnishings, “environmental enrichment panels” he invented for offices, folk art-inspired wooden dolls, and a full-scale replica of the conversation pit he invented for Eero Saarinen’s J. Irwin and Xenia Miller House in Columbus, Indiana (though not sunken per ADA rules and the impracticability of excavation for a temporary show).

“[Girard] warmed up to modernism when architects were creating glass and steel buildings that were industrial and the open-office concept was becoming popular in corporate spaces,” says Brooke Hodge, Palm Springs Art Museum director of architecture and design. “He introduced color and exuberance. I think that is one of his biggest contributions. He saw what was needed to make spaces much more human.”

Hodge speculates that people who don’t know Girard by name at least have seen his work. “He designed over 300 textiles for Herman Miller,” she says. “A lot of the furniture that people recognize might be designed by Charles and Ray Eames or [Harry] Bertoia but had Girard’s fabric.”

Indeed, Joan and Gary Gand “discovered” the fabric artist after buying a George Nelson modular bench with Girard upholstery at a 1986 auction in Oak Park, Illinois.

“We were the only bidder!” Joan says. “Since that time, Girard has become more well known and highly collectible.”

The Gands, who own a home in Riverwoods, Illinois, bought the Palm Springs Class 1 Historic Morse Residence (by Palmer & Krisel) in 2013.

“It had many large, white walls begging for art,” Joan says. “Sixteen years ago, we purchased one of Girard’s ‘environmental enrichment panels’ at the Palm Springs Modernism Show for our house in Riverwoods. We brought it here to see how it would look. The eye-catching simplicity of the graphic design was just what those walls needed. We started searching to buy more.”

Joan recalled a Girard exhibit at Chicago’s Merchandise Mart and called to find out what happened to the displayed items. From a collector/reseller in New York, the Gands purchased six more panels. They now have nine, three gracing their front hallway. 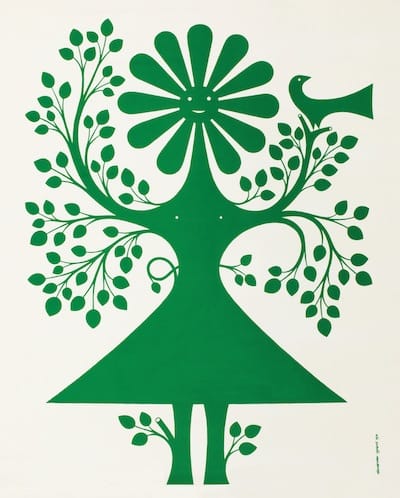 Echoing Hodge, Gary notes that, “Girard designs provided a pop of color and fun in an otherwise straight-laced office design.”

Recently, the Gands bought a dozen custom pillows in Girard fabrics for their living-room sofa. “We were highly influenced in our decorating style by photos of the Miller House living room,” Gary says. “Girard’s designs make you smile,. They were rooted in folk art [Girard’s collecting passion], so people could relate to them and feel comfortable around them. He added whimsy and humanized midcentury modern design.” 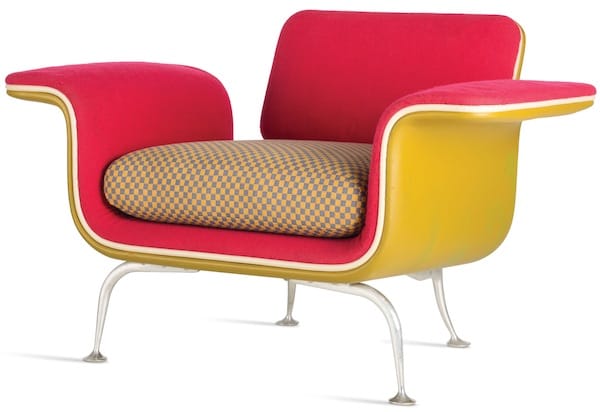 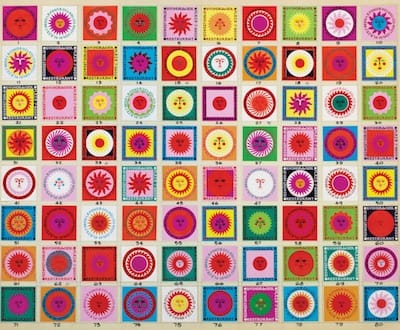 Trina Turk — who has a Palm Springs home and a international, eponymous line of apparel and home décor — learned about Girard from shopping at flea markets and thrift stores and then through modernism shows, exhibitions, architectural tours, and auctions.

“It’s impossible not to come across his creations if you’re at all interested in the decorative arts of the midcentury period,” says Turk, whose product line hinges on that era’s vivacious hues and patterns. “[Girard’s] work has influenced our brand and any other design company working with vibrant color and looking to exude unbridled optimism.”

“I am very interested in geometrics and patterns,” the Palm Springs-based artist says, adding that he became fascinated by how Girard determined when to repeat shapes and colors in his patterns. “I also was inspired by the fact that there was no limit to what he was willing to take on. Nothing was beyond being considered as total environment.

“As far as I know, he was the first person to integrate folk art and art from other cultures into austere, modern environments,” continues Isermann, who has an Eames office chair upholstered in Girard’s orange Hopsak. 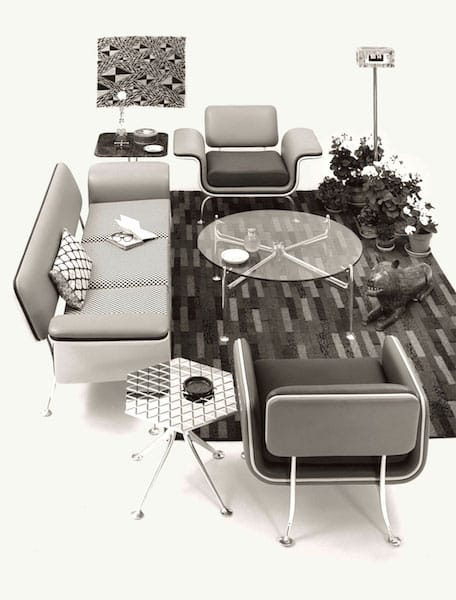 The Girard Group by Herman Miller (1957)

“Everything Girard did was widely influential,” Isermann says. “His ideas about casual entertaining and living are so embedded in Palm Springs.”

“Whether it was the interior of a house or restaurant or creating an identity for a company, he just had this great understanding of how to create a sense of place in a place,” Hodge says.

“I think what people will get from the exhibition is that everything he did was playful but sophisticated at the same time,” Gary Gand says. “You can’t look at anything he did without breaking into a smile. I think there’s a lot about modernism that people think is cold or industrial or static. When it comes to Girard, it is exactly the opposite.”

His Own Little World

While at boarding school in England, Alexander Girard created a fantasy universe that he called Celestia (his family’s realm therein being the Republic of Fife). He assembled 24 vocabulary books with grammatical rules and glyphs for its language. Later, at the School of Architecture, he “signed” his work with a triangle, square, and circle in lieu of “Alexander Hayden Girard;” he used the same symbolic set on sample books for Herman Miller. 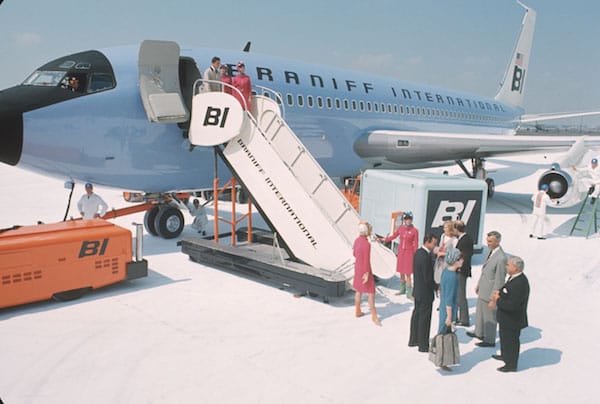 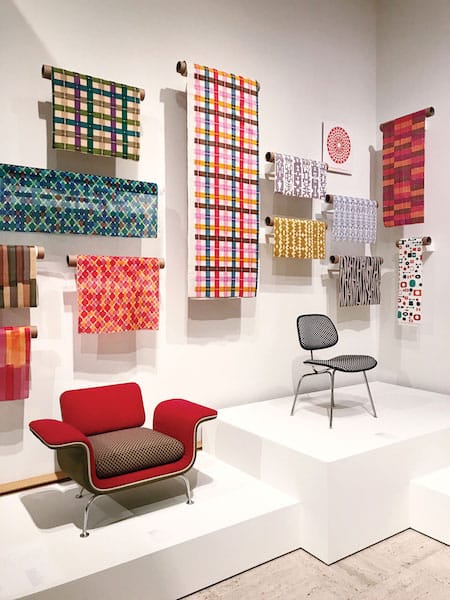 1960–61 Design for the new La Fonda del Sol restaurant in Manhattan’s Time & Life Building included everything from the floor plan and all interiors to dishware, menus, and matchbooks.
1962 Designed Irwin Miller’s Washington Street office and its expansion (1972).
1965 Branding for Braniff included fuselage colors, seat covers, waiting lounges, and all graphics and typefaces for items from tickets and luggage tags to sugar packets.

Donated more than 100,000 objects from his folk-art collection (representing more than 100 countries) to the state of New Mexico; designed the opening/permanent exhibition of 10,000 objects at the Museum of International Folk Art in Santa Fe.