The dining landscape in Greater Palm Springs continues to attract its fair share of artistic types such as chefs eager to unfurl a unique culinary flag. When it comes to trends (read: variations on the theme of kale salad, mac ’n’ cheese, Brussels sprouts with bacon) collusion is the name of the game. 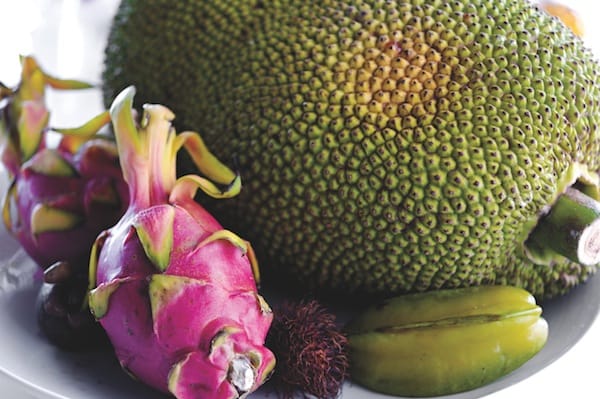 Welcome to the globalization of cuisine, in which fruits such as papaya, rambutan, durian, and dragon fruit (aka pitaya) now play hide-and-seek on a plate in the Southern California desert.

At North Palm Canyon’s Mad Hatter-esque EIGHT4NINE, Executive Chef Chuck Courtney exercises his preference for dragon fruit or mango curd in a paté sucrée crust. Chi Chi at the Avalon Hotel is decidedly partial to coconuts and it shows up in its iced tea and the coconut oil fried chicken with mango salsa. Mango mania continues at Pho 533 where Executive Chef Chad Gardner pairs a ginger tamarind sauce with mango summer rolls. 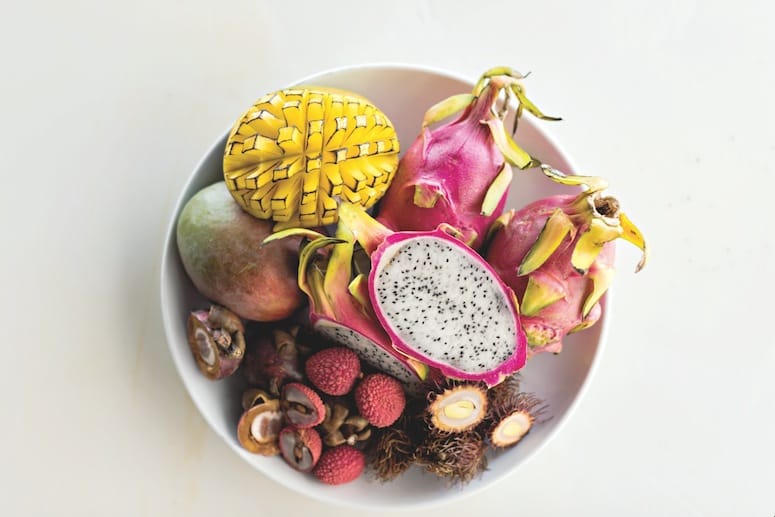 Above: Strange platefellows. In many ways, the artistic and international culture of our valley seems a perfect match for fruit such as durian, dragon fruit, rambutan, or lychees. 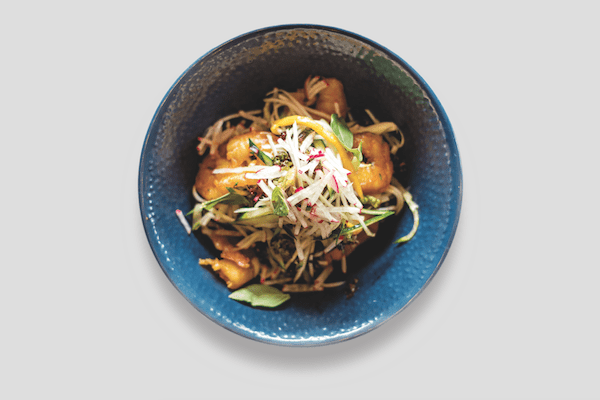 Luck out at a farmer’s market this time of year and you might encounter an elongated purple-colored fruit that looks like a blackberry shot up with toxic levels of growth hormones. Fear not: It’s a Pakistan mulberry. It might well be sold near a vendor who’s hawking a basket of Buddha hands, a golden fruit that indeed resembles a hand with its fingers outstretched. One of the oldest citrus fruits, its zesty aroma inspires its description as a lemon with fingers. (A sure bet for sourcing it is Cunningham Organic Farm in Fallbrook, which sells them at Temecula farmers markets.)

These strange items are not everyday bumper-crop produce. Snagging a few requires patience, timing, and a little luck.

Fascination with the rare and colorful is also expressed in the cocktail realm. The obvious jumping-off point is at The Tonga Hut Restaurant and Tiki Bar on N. Palm Canyon, where the little-grass-shack vibe finds its rhythm with the Mojave Punch, a house specialty tingling with passion fruit and homemade hibiscus syrup. 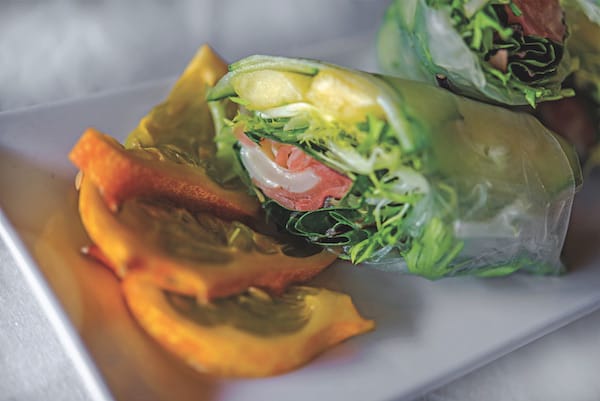 “About 30,000 years ago the Coachella Valley was in the midst of an ice age,” says Professor Richard Minnich of the University of California, Riverside Department of Earth Science. Not the white polar bear, Revenant type. “It was still a Mediterranean climate. Just wetter and cooler. That is to say still arid, but with up to 2 1/2 times greater rainfall amounts.”

There were river-fed lakes in the desert and summers were cooler. “More temperate in general,” Minnich says, “with less variation in summer and winter.”

“Camels, saber-toothed cats, mastodons all roamed the area,” he says. And although their diet was different from what local wildlife eats here today, it wasn’t exactly strange-fruit exotic. “There weren’t high numbers of these animals since vegetation was quite limited,” Minnich says. “A lot of Joshua, juniper, and piñon trees along with desert fauna.”

“The food supply was along the Colorado River,” Minnich says. “It wasn’t until the Native Americans brought agriculture here about 13,000 years ago that you began to get the pinnings of modern-day crops.”

Courtney might have the best explanation for the current trend toward weird produce: “Exotic fruit is vibrant. It gives your eye a reference point.” 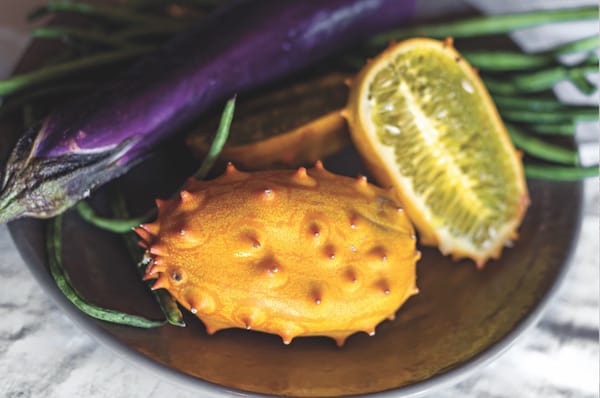 Starfruit, for instance, has such a fetching conformation that it steals the scene on a fruit and cheese plate. Just don’t expect an avalanche of flavor. “It’s more or less like a green grape,” Courtney says.

Dragon fruit also lacks a Rocky Balboa punch, according to Courtney. “Like other exotics, the taste profile is significantly enhanced with a hit of acid or spice. A good example being a papaya salad with torn basil or mint.”

Another reason exotic fruits are trending is their availability. Although the most unusual products are still found mostly at farmers markets, it’s not uncommon to roll the aisles at Gelson’s, Bristol Farms, Whole Foods or Ralphs (local chef’s tip: the Ralphs Smoke Tree location) and come across, say, jackfruit or guava. It’s possible, sometimes, to find the super exotics like durian, lychee, mangosteen, or pummelo. Dragon fruit, mango, and papayas are simply de rigueur.

Avid area gardeners have even taken to growing their own. Perry Coles of California Tropical Fruit Trees in Vista says that although tropicals present challenges, it’s easier if you know what does well here. “Lychee, mango, and dragon fruit especially work well here because of their similarity to cactuses.”

As a point of reference he suggests looking at tropical locations and seeing what grows in highland areas (as high as 2,000 feet of elevation) and use that as a guideline. Or grow what you like in a pot. “Potted plants can go anywhere so can be kept warm. Plus,” he notes, “you avoid investing in trees that you can’t take with you if you move.”

“Although the most unusual products
are still found at farmers markets,
it’s not uncommon to roll down the aIsles
at Gelson’s … or Ralphs and find jackfruit or guava.”

Moving isn’t in the plan for Vietnamese hotspot Pho 533, but expansion is … especially the addition of their spring roll bar. That includes not just enlarged space, but exotic quotient.

“We will integrate more jackfruit and dragon fruit onto the menu, offering more exotic and inventive spring rolls,” says Gardner. “Additionally, we plan to incorporate longan and lychee into some of our new sauces and cocktails.”

Dessert is also fertile ground, says Gardner. “The dessert menu expansion will be inclusive of exotic fruits.” Exactly how is still under wraps, but don’t be surprised to see exotics here get familiar treatments, brulee among them.

Although dessert is the obvious first rung on the exotic fruit ladder, local chefs are quick to climb higher into savory territory. Courtney has a particular interpretation. “Exotics marry well with gamey poultry and fowl,” he says. “I’m thinking of roasted pheasant [turkey or chicken also works well] with a mangosteen chutney. I like it because it’s easy to accomplish at home.”

He’s equally enamored by the idea of unripe jackfruit cooked into curry.

Chris Olson at the Thunderbird Country Club aims higher, into real-man territory. He’s quite fond of traditional prairie-roaming animals such as bison, venison, or elk.

“Lumberjack meats, although pricey, pair terrifically with exotics,” Olson says. During the season, he’s been known to tantalize guests with smoked bison loin with a guava barbecue glaze at special events. Satays with venison and chicken thighs perform a tasty tango with passion fruit mint salad when he caters to what he calls his “sandbox eaters — those people who aren’t afraid to trust and dive into a dish that’s unfamiliar and has perhaps less than pronounceable ingredients.”

Olson also has seen the benefits of exoticizing less rarefied meats and fish.

Roasted quail with summer peach, foie gras and mango glaze, or a slow-poached pork loin with a guava Thai chili tamari barbecue sauce, for instance. And for the vegetarians in the crowd, his garden green exotic fruit salad with kale macadamia nut pesto and passion fruit vinaigrette is known to satisfy even the most restrictive taste buds.

Olson’s turn at fish often means halibut or sea bass cheeks with rambutan and smoked pineapple relish. A tip to people who’ve not ventured beyond fish steaks: go for cheeks next time. “They’re gaining in popularity and are arguably the best part of the fish.”

Chefs know that no matter the rarity quotient of a dish, an exotic fruit pairing is only as good as its spice counterpart.

Pho 533’s Gardner reaches for licorice root, “a fantastic complement to the sweetness of exotic fruit.” He also keeps star anise and fennel seed at hand. And Mexican cinnamon to heighten mango and jackfruit dishes.

Olson offers a tip: “Toast whole spices before using them, then crack into a spice grinder before incorporating. Then add sparingly. Too much can overwhelm a dish.”

The flavor profiling doesn’t end at spices at über chef Matthew Kenney’s restaurants and culinary retreats around the world. Known for his innovative spin on zenlike cuisine, Kenney uses star fruit and passion fruit to complement coconut almond crisp sorbet at his Plant Food + Wine restaurant in Venice, California. “We vacuum sealed the star fruit with pineapple juice and spices like star anise and pink peppercorns,” says Scott Winegard, director of culinary operations across all of Kenney’s restaurants. “The finished product was beautiful and delicious.”

To coax an unexpected dimension out of exotic fruit, Winegard recommends smoke. For adventurous home cooks who are, nonetheless, exotic neophytes, a sure winner is to smoke a jackfruit and add it to a savory dish for flavor just this side of Never-never Land. An initiation into a world where the brightest of colors and strangest of fruits have proved to be the winning combination of Palm Springs’ new color-coded cuisine.