Alton Brown loves the desert and has considered buying a house in the valley.
PHOTOGRAPHY COURTESY ALTON BROWN

“Everything gets a variant these days,” says Alton Brown, about his latest variety show tour, Beyond the Eats: The Holiday Variant, which stops Dec. 12 at the McCallum Theatre in Palm Desert. “For me, the cross up of the holidays with food is just such a natural thing. Putting together a holiday-centric show for the family, a live show during the holidays, was the next evolution of the project as a whole.”

The two-time James Beard Award winner (Best TV Food Personality/Host for his Food Network series Good Eats in 2011 and Best Cookbook for I’m Just Here for the Food in 2003) launched his live variety show in 2013 at the McCallum — a natural progression for a theater major who got his start in cinematography before carving his niche as a science-minded culinary host on such shows as Cutthroat Kitchen, Iron Chef America, and Netflix’s recent reboot Iron Chef: Quest for an Iron Legend. Brown There’s also a bit of song and dance, stand-up comedy, and audience participation.

A native Angeleno who now calls Georgia home, the 60-year-old enjoys spending time in Greater Palm Springs, so he says he’s eager to return to the McCallum. We caught up with Brown ahead of his performance in Palm Desert to hear about the Holiday Variant tour, his failed attempts at wooing women with homecooked meals in his college years, and his favorite spots to visit while he’s in town. 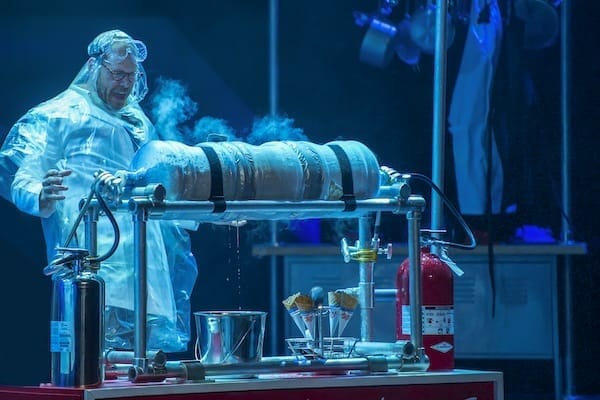 You made your theatrical variety show debut at the McCallum! What propelled you to launch a show for live audiences?

I think I really was daring myself. I wanted to do something that nobody had done.

People had toured food shows, but I wanted to build a culinary variety show that had all the things that stage variety shows used to have — or even TV variety shows from the ’60s and ’70s — some music and comedy and large, strange demonstrations that are very theatrical and not very practical for home use.

We toured three legs of that first tour, and then we came up with Eat Your Science and did three legs of that. We took a break for COVID, and then last year launched Beyond the Eats. This year, we decided to do something different and do a holiday version of the show. The songs have been changed up with holiday songs, the kind of game show that we play in the middle with audience members has been changed to be mostly holiday. I’d say about 35 percent of the show has been changed up specifically to make it more for the holidays.

Speaking of the holidays, what’s your favorite holiday tradition?

Drinking. Drinking and staying away from my family [he laughs]. I like to cook at the holidays, but I’m very simple. I’m very traditional. I do the exact same thing every year. If we’re entertaining, the deal is, all I do is turkey — everybody else has to bring stuff because I’m not going to drive myself crazy. Four days of cooking for 10 minutes of eating and 24 hours of cleaning up? I’m not going to do it. 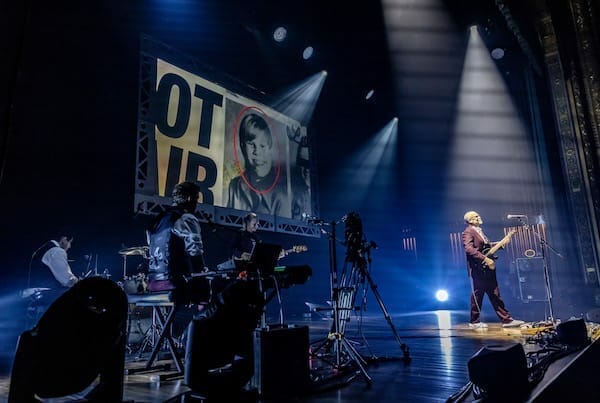 So, how does Alton Brown prepare a turkey?

One of my favorite turkey recipes is actually a spatchcock oven roast. I cut the backbone out, I flatten it out, I cure it with salt and pepper — not a brine but a cure, so it goes on dry. And I let the thing air dry in the fridge for a couple of days. Then I put it directly on the rack of the oven and roast it. And I put a pan of vegetables underneath it to catch the drippings and cook that. It usually cooks in about 45 to 60 minutes.

It’s one thing to cook at home. Quite another to do these experimental demos in a theater. What goes into the logistics of planning a cooking demo onstage?

Well, first off, our cooking demonstrations involve very large devices. For instance, the Edible Inevitable tour had an Easy-Bake Oven that was 8 feet tall and 12 feet long with 65,000-watt lighting units inside of it. Our main demo for the Eat Your Science tour was a 13-foot rocket ship that popped popcorn.

The live show’s cool because it does involve a lot of audience participation, a lot of people up onstage. So that makes every night very different. I never know what’s going to happen, which is fine. That’s what keeps things lively.

Are you working with a team to come up with these crazy ideas?

Everybody that works on this show are people in my core crew from the Good Eats show. As a matter of fact, most of the people on this tour have been with me in tours since the very beginning of our touring. A lot of the tour crew don’t do anything but tours, but the core people that put this together with me have been with me, some of them, for 20 years. 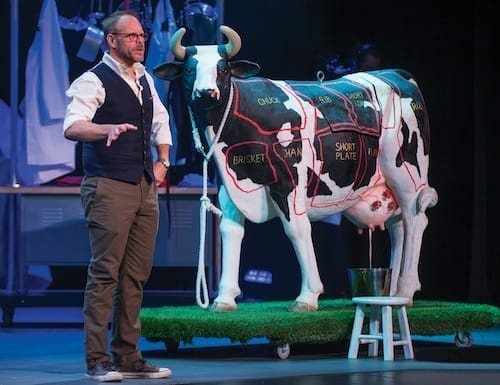 What do you hope audiences take away from the show?

My MO, in general — whether it’s filming or onstage — is first and foremost, I must entertain. I need to entertain at a relatively high level because I have a sophisticated audience. I hope that I plant enough knowledge in their heads, so that maybe two weeks later, they all of a sudden are like, “Hey, Alton said, ‘Blah blah,’” and something has sunken in. But that is not the primary [goal]. What I really want them to see is the rocket that’s delivering it. I want that to bubble [in their minds]. Walk out of the theater and say, “That was a really good time.” But if they learn something, that would be great.

Where did your interest in the culinary arts and, really, the science behind it all begin?

Well, I wanted to learn how to cook and got really interested in cooking in college because I learned to cook to get dates. I had a relatively pathetic social life, and I didn’t have a lot of money. So, my best bet was to offer to cook a meal for a young lady, which was still a relatively rare thing. 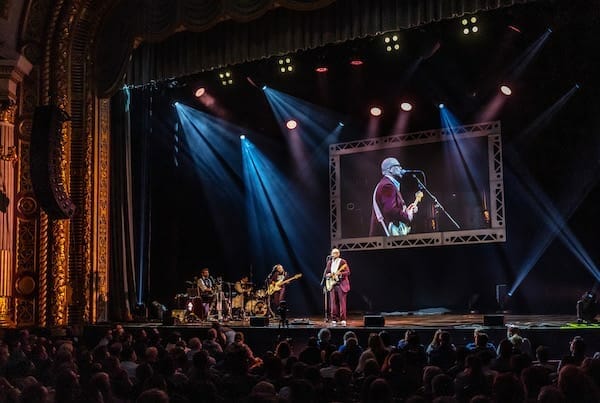 When I was in college in the ’80s, the whole food thing hadn’t happened [for me] yet. And then I just got interested after that didn’t work very many times. I discovered that cooking was actually kind of fun. I also realized that I wasn’t very good at it. And if I wanted to get good at it, I had to figure out what made things tick.

What were you pursuing in college?

My college degree was in theater. So, I’m finally making that theater degree pay off, I like to say. And then I went into filmmaking. I directed TV commercials for almost 10 years. I worked as a cinematographer, which are all things that I brought to Good Eats, because I directed the show for many years. But food was a hobby, really. I cooked as a hobby.

I got this idea in the mid-’90s that food was going to be the next big media thing. I don’t know why I got that idea, but I did. And I thought, “You know what? I’m going to make a food show.” Everybody thought was crazy. I’m like, “No, I’m going to quit my job and go to culinary school.” And I did [at the New England Culinary Institute], just so I could make Good Eats.

What do you enjoy about performing at the McCallum?

I really like the crowds there. The theater’s beautiful. And they have the best catering of any theater in the United States, so all of my people want to go back because the food that they serve us while we’re working is really, really, really good. I know that probably sounds like a small thing, but when you’ve been on the road for weeks and weeks, it’s a huge deal. 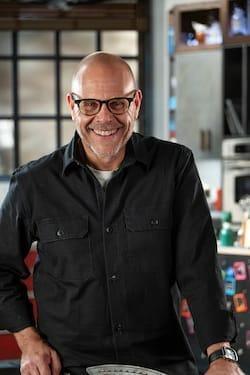 “I’m a desert rat, and I really like the vintage vibe there. I like the design vibe there. And I love being able to get out into the desert.”

Performers tend to rave about the catering there. But it really says something that a culinary guy, such as yourself, thinks so.

Yeah. It’s really, really, really good. And it is an incredibly friendly bunch of people there. The theater itself is just really brilliant. It’s a joy to be in that theater. And I feel a certain sense of homecoming there, simply because it was my first. Our first show had a great experience there, and that set us in motion for everything else we’ve done. So I’m really pleased to be coming back.

Do you visit Greater Palm Springs outside of touring?

Whenever I get a chance. My wife and love that area. We’ve talked about trying buy a house there. I’m a desert rat, and I really like the vintage vibe there. I like the design vibe there. And I love being able to get out into the desert. We’re even talking about coming back to Palm Springs and Costa Mesa after the tour ends later in December.

There’s a restaurant in Palm Springs that we’re just crazy about called Rooster and the Pig. And then there’s the old classic steakhouse up the street from that — Mr. Lyons. They have a wonderful speakeasy bar in the back.

Yes! Thank you very much. I’m glad to be reminded of it. And I really, really like staying at L’Horizon. That place is just magnificent, but I have to save up because it’s not cheap. Those are some of the things that I always look forward to.