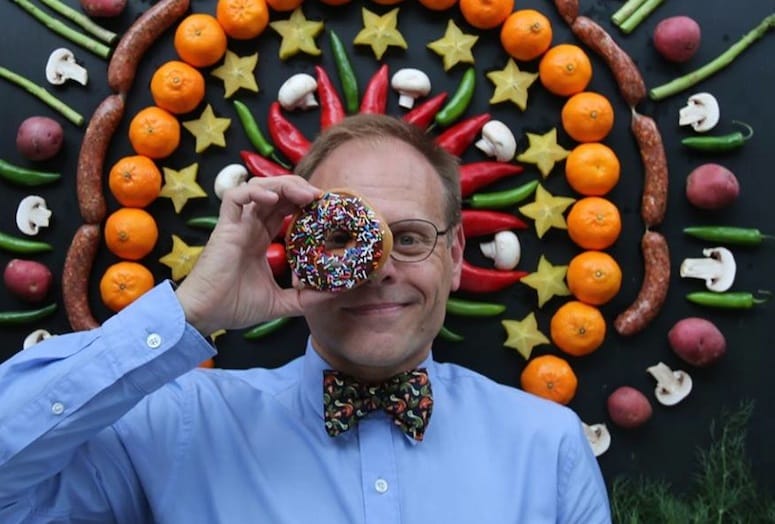 Envision a mad scientist complete with lab-coat, whisk and salad tongs experimenting with food, music, and a “poncho-zone”?

“The Edible Inevitable Tour”, featuring chef Alton Brown, is a mix of humor and culinary-science antics all tossed together and presented on stage Oct. 18 at the McCallum Theatre in Palm Desert.

But there's no yak in the act.

Brown, known for one of his many stints as host of Iron Chef America, said yak is his most memorable “secret ingredient” from that show, but he won't be bringing it to Palm Desert.

To Cooking Channel and Food Network junkies, Brown is a hero and culinary genius. After 13 years writing, producing and hosting the show “Good Eats”, he has authored more than one book on the New York Times’ Best Sellers list.

He has also received the James Beard Foundation Award, twice… once, for Best Cookbook in the Reference category (2002), and again for Outstanding Television Host (2011). He was also given the Peabody Award in April of 2007 for excellence in broadcast news, education and entertainment.

What’s Cookin’?
“Alton Brown Live” will bring his family-friendly foodie forum on the road for all to experience with a twisted combination of bizarre experience and surprises.

Cooking 101: Toss or Spin?
Brown is poised to demonstrate his culinary prowess and present a “cooking course” while, as any good teacher would, encouraging audience interaction.  Those lucky enough to “study” at the front of the class are considered “in the poncho zone”. As for rumors Brown will be “throwing food”, he admits, “Oh, I'm not throwing food.  But one of my demos does tend to get a little messy…sometimes…usually.”

“I’m Just Here for the Food”…
Brown says he will kick off his first-ever tour at McCallum because “Well, for one thing the McCallum Theater is a sweet house…the perfect place to mount a show like ‘The Edible Inevitable Tour’. Also, I've never been to the Palm Springs area and I've always wanted to spend time there,” he says.

“Good Eats” & “ Gear For Your Kitchen”
• Brown’s favorite spice: “Cumin.  It's one of the most ancient spices we have and tastes like history to me.”
• One kitchen gadget Brown can’t live without: “That depends on what you call a "gadget". But I'd say a panini press ranks right up there.”