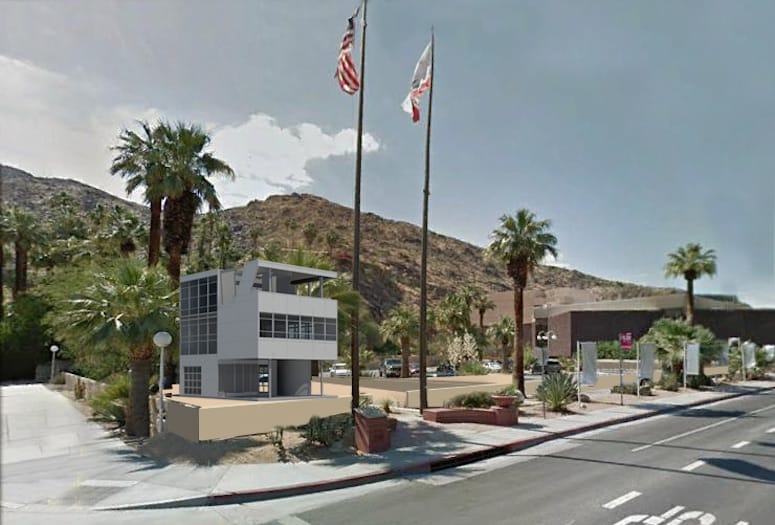 The Aluminaire House will be positioned at the corner of Tahquitz Canyon Way and Museum Drive in Palm Springs.
PHOTOGRAPH COURTESY PALM SPRINGS ART MUSEUM

After narrowing the choices for its final home in Palm Springs to two locations back in March before the COVID-19 pandemic hit, the Aluminaire House Foundation announced Sept. 3 that it has donated the historic Aluminaire House to the Palm Springs Art Museum where it will be part of the museum’s permanent collection.

The historically significant aluminum and metal prototype residence, designed by Albert Frey and A. Lawrence Kocher in 1931, will soon be located outside on the grounds of the museum. Pending final approvals from the City of Palm Springs, assembling the structure will begin in 2021.

“Palm Springs Art Museum has a long tradition of honoring Albert Frey, so donating the Aluminaire to be a part of their world-class collection was an obvious choice,” said Aluminaire House Foundation, California Chapter member Mark Davis. “We are thrilled that this structure, which we brought to Palm Springs three years ago, will soon be reassembled with private funds raised by the Aluminaire House Foundation, and be on permanent display outside of the museum.”

The Aluminaire House is considered a masterpiece of modernist design, recently listed by Architectural Record as one of the most important buildings completed worldwide in the past 125 years. New York architects Michael Schwarting and Frances Campani worked diligently for more than 25 years to save, protect and document Aluminaire, and formed the Aluminaire House Foundation to locate a suitable permanent home for the structure.

Once Aluminaire is reassembled, the full arc of Albert Frey’s career in America, from 1931 until his death in 1998 in Palm Springs, may be experienced in the city and at the museum. 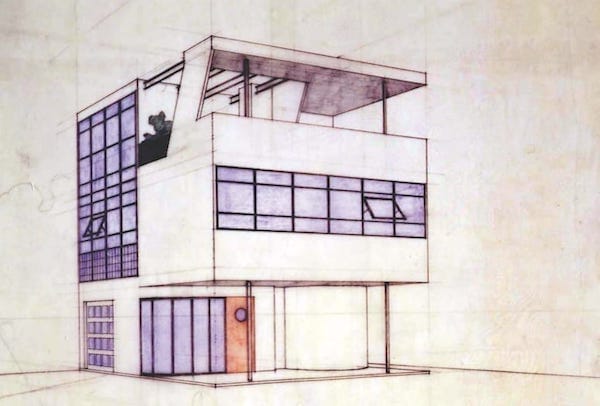 RENDERING COURTESY ALUMINAIRE HOUSE FOUNDATION
The Aluminaire was first constructed in 1931 for a public exhibition in New York.

“The Aluminaire House is an excellent addition to our robust Albert Frey collection, which also includes Frey House II (1963-64), the residence the architect lived in until his death in 1998,“ said Steve Maloney, chair of Palm Springs Art Museum’s Board of Trustees. “We are honored that the Aluminaire House Foundation chose to donate this important work to Palm Springs Art Museum so that we can present it to the public. We look forward to celebrating the next chapter of this essential Palm Springs architect who is so strongly associated with bringing international modernism to the desert.”

Frey’s connection with the museum dates back to its origin; his firm co-designed the original Palm Springs Desert Museum, and he served as a member and president of the board of trustees. Frey generously bequeathed his archive of drawings, personal and working papers, photographs, scrapbooks, and other documents—along with his Frey House II residence, which sits on the hillside above the museum. 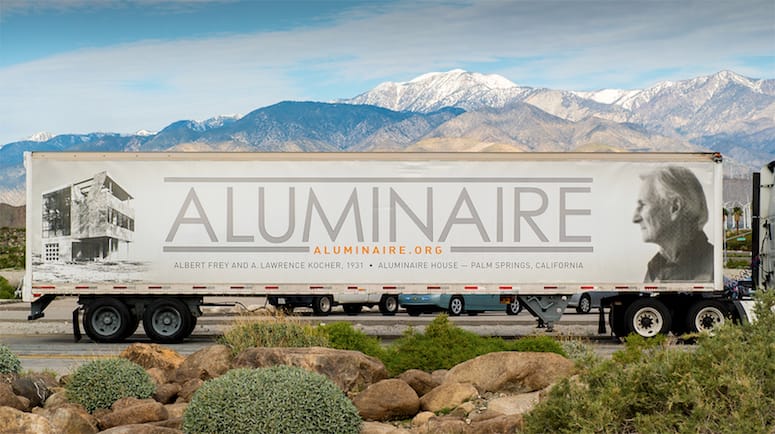 The truck carrying the pieces of the Aluminaire House were expcted to arrive at the Palm Springs Art Museum on Sept. 3.

"While Albert Frey, who is called the father of 'Desert Modernism,' brought international style to Palm Springs and enjoyed acclaimed fame, he remained less known in his own home country, Switzerland," says Benedikt Wechsler, consul general of Switzerland in San Francisco. "It is exciting to see the Aluminaire House find a permanent home at Palm Springs Art Museum, and this project is a testimonial to Frey’s practice and important legacy."

In conjunction with the reassembly of The Aluminaire House, Palm Springs Art Museum is organizing a major Albert Frey exhibition for 2021-2022, which will be presented at the Museum’s Architecture and Design Center, Edwards Harris Pavilion. It will be accompanied by a major publication that features archival materials from the museum’s collection, including a newly donated selection of Frey archival materials that will be presented and published for the first time.

In 1931, the Allied Arts and Industries and the Architectural League of New York unveiled the starkly modern, all metal ‘Aluminaire’ home, constructed mostly of aluminum and glass components, which inspired the name. It was intended to be mass-produced and affordable, using inexpensive, off-the-shelf materials. Aluminaire caught the attention of the public, so much that in just one week on exhibit, more than 100,000 visitors toured the home.

The three-story house, assembled in just ten days, was designed by A. Lawrence Kocher, the managing editor of Architectural Record, and Albert Frey, then a 28-year-old Swiss architect who had recently immigrated to America after working in Paris for the great architect Le Corbusier. 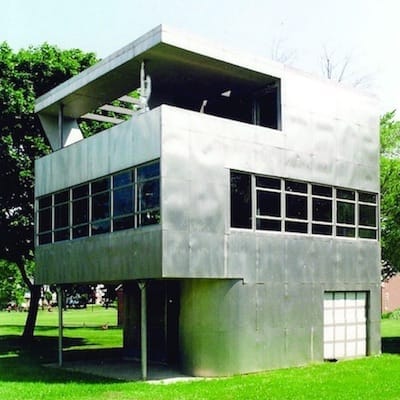 It was the first all-metal house constructed in the United States, and of such importance in the architectural world that images of it were featured in the prestigious exhibition, “The International Style – Architecture Since 1922” at New York’s Museum of Modern Art in 1932. Aluminaire emboldened a new architectural movement in the United States. While intended as a display of products, Aluminaire was also an overt demonstration of bringing together the ideas of mass production and high-density community planning.

When the 1931 exhibition ended, the building was purchased by architect Wallace K. Harrison, who relocated it to his country estate in Huntington, on Long Island, outside of New York City. Used first as a country house, then added on to, it was later relocated elsewhere on the estate, undergoing significant changes. After years of poor maintenance, the severely deteriorated structure became at risk for demolition in the late 1980s. A concerned group of preservationists, led by architects Michael Schwarting and Julio M. San Jose, Dean of the New York Institute of Technology, saved it, dismantled it, and arranged for it to be donated to the school for their campus, where it was restored and reassembled by architecture students with Prof. Schwarting. When that campus closed, Schwarting and Campani took charge of the house and formed the Aluminaire House Foundation in 2011. The house was again dismantled in 2012 and put into storage in New York where it languished in a shipping container.

Schwarting and Campani were invited to Modernism Week several years ago to present on Aluminaire. To an auditorium full of architectural enthusiasts, they presented their story about studying the home for more than 20 years, saving it from demolition, dismantling it once, reassembling it and then having to dismantle it yet again and put into storage, homeless. That day, an idea was hatched by a core group of local 'believers,' who thought Palm Springs would make the perfect home. 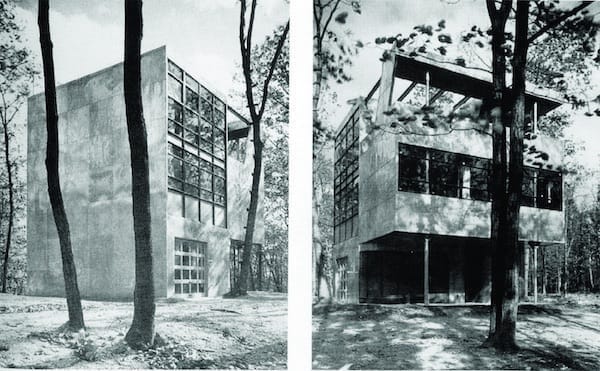 Immediately after this, the California chapter of the non-profit Aluminaire House Foundation was registered, dedicated to raising funds to move the house to Palm Springs and reassemble it here for permanent display. This local committee, including Tracy Conrad, Mark Davis, Brad Dunning, Beth Edwards Harris and William Kopelk, began the task of raising funds to secure the permanent location for the architecturally significant house. In 2017, the disassembled house was shipped to Palm Springs and has been in storage.