From the outside, American Legion Post No. 519 on Belardo Road looks like any other single story, square building in Palm Springs. But once you cross the asymmetrical entry and take a closer look around, you realize this is no ordinary space.

The post was founded in 1934 by World War I veterans including prominent Palm Springs resident Earl Coffman and was named in honor of Coffman’s son Owen, who was killed in action during World War II. After raising funds for a permanent location — the group had previously met at the Desert Inn — members enlisted renowned architects John Porter Clark and Albert Frey to design what was then called the War Memorial Building, which officially opened to veterans and their families on Jan. 3, 1948.

The historic building will serve as the site for a Modernism Week Fall Preview party, Past Meets Present, from 2-6 p.m. Oct. 19. It will be the first time the building will be open to the public for a Modernism event. The afternoon will include a talk on the post’s history, tours, cool cocktails, appetizers, and live entertainment by Freddie Fender Jr. and the Trainor Bros. Band. Tickets are $30 per person. “We want to get involved with the community,” says post co-event organizer Debra Airey. “There’s a lot of history in this building and we want to share it with everyone.” Adds post historian Lee Wilson, “We are so excited to be getting involved with Modernism Week and showcase this midcentury modern diamond in the rough.”

According to Steven Keylon, architectural historian and vice president of the Palm Springs Preservation Foundation, Clark and Frey designed the post in the Late Modern style which was primarily inspired by the horizontal lines and warm palette of Frank Lloyd Wright, as well as the clean lines of International Style architecture. The architects started with a very simple, unadorned "box" for the primary volume of the building and added some decorative Late Modern touches to enliven the facade.

The piano pictured in this 1940s photo of the American Legion Post No. 519 hall shows the 1905 Steinway baby grand piano, which is still around for guests to view.

In addition to the asymmetrical entryway, other signature Late Modern design elements include corrugated architectural glass walls and a heavily angled roof supported by one pole. The most defining feature of the structure — a lamella (or Zollinger) roof; one of only three left in California — however, is now hidden above a dropped ceiling that was installed in the 1970s. Prior to that, there was an additional seven feet to the vaulted ceiling that lent an open, airy, and elegant feel to the room.

At the back of the hall on the stage sits a 1905 Steinway baby grand piano that was used to accompany stars like Al Jolson, Frank Sinatra, and Doris Day during the weekly Kraft Music Hall variety show that was produced live from the post. Between 1948 and 1954, this nationally broadcast radio program featured the biggest names in Hollywood including Bob Hope, Groucho Marx, Judy Garland, Jack Benny, Oscar Levant, Bing Crosby, Cary Grant, and David Niven.

American Legion Post No. 519, 400 N. Belardo Road, is open daily from 10 a.m. to 9 p.m.* (*subject to seasonal changes). The post is open to the public for lunches, Friday dinner, Sunday Brunch and special events. For more information, visit palmspringslegion.org.

For tickets to Past Meets Present and more information on Modernism Week Fall Preview, visit modernismweek.com 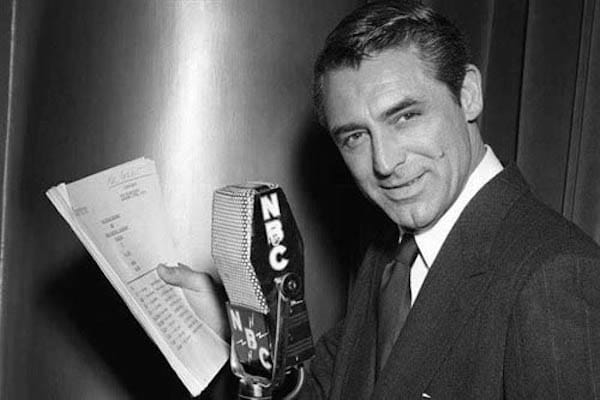 Cary Grant was one of the movie stars to participate in the live broadcasts from the American Legion Post No. 519.

AUDIO: Listen to a snippet of a Kraft Music Hall broad cast from the American Legion Post No. 519 in Palm Springs starring Al Jolson.