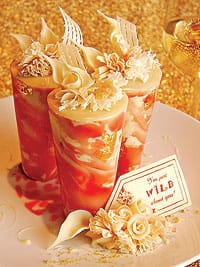 A sensual elixir and all-time favorite indulgence, chocolate hooks people for life. The Palm Springs Chapter of Les Dames d’Escoffier International, an organization of women in the culinary field, gives chocolate lovers a reason to indulge and rejoice without guilt at its yearly fundraiser, L’Affaire Chocolat. The event supports the organization’s Young Chefs in the Making Scholarship program. Sponsored by Palm Springs Life, the festive affair enables seven girls to realize their dreams of studying the culinary arts. One has already graduated from The Art Institute of California at San Diego and six are in various schools — three at College of the Desert, two at Johnson and Wales in Denver, and one at the Culinary Institute in Hyde Park, N.Y.

The 2005 event Feb. 13 at Rancho Las Palmas Marriott Resort & Spa featured cooking demonstrations, auctions, a professional chef’s competition, champagne and wine, and miles of chocolate for tasting, including a chocolate fountain with yummies for dipping. The judges — a panel of local chefs and food writers — were impressed that participants did their homework, created romantic entries with a Valentine theme, and combined chocolate with exotic ingredients.

Joel Hochberg, a former advertising director for major New York agencies and marketing director at 20th Century Fox, filmed a documentary of the event, as well as the setup the day before. He offered to shoot the film pro bono; Les Dames d’Escoffier now has a great presentation, set to music, to illustrate its mission. Retired from his show business career, Hochberg has time to follow his passion for filmmaking and enjoyed the chocolate treats along with his subjects. He plans to follow this year’s event because L’Affaire Chocolat is “a labor of love for everyone involved.”

An exciting new venue is in the works for this year’s event on March 26: a huge white tent adjacent to The Gardens on El Paseo. The fundraiser will be the final event of Fashion Week El Paseo, a Palm Springs Life event that will bring together merchants on Palm Desert’s avenue of elegance during a week when so many visitors will be here to enjoy the Pacific Life Open and the Kraft Nabisco Championship.

Theories abound extolling the health benefits of chocolate, saying that the high polyphenol levels in chocolate reduce the oxidation of low-density lipoproteins and thereby protect against heart disease. This idea emanated from a study of 8,000 male Harvard graduates that showed that chocoholics lived longer than abstainers. Whether this is scientific data or not, those guys must have had a tasty time.

Even Paul Newman is on the chocolate-is-healthy train; Newman’s Own is marketing Organics Sweet Dark Espresso Chocolate.

One ounce of dark chocolate packs more than twice the healthy antioxidant punch of red wine. According to Prevention magazine, a four-ounce serving of chocolate pudding has 62 fewer calories and four fewer grams of fat than four ounces of turkey. In the February issue of the magazine, Tanya Beers takes up the healthy aspects of dark (not milk or white) chocolate, as well the link between chocolate and sex.

Chocolate is a globally acceptable addiction and is equated with romance in many quarters. It is still up for grabs whether chocolate truffles or hunky Johnny Depp had more sex appeal in the popular 2000 film Chocolat. Years later, Depp is still entwined with chocolate as Willy Wonka in the recent Charlie and the Chocolate Factory.

Miramonte Resort’s THE WELL spa appealed to chocolate lovers with a Valentine’s Day package, the ultimate in chocolate-dipped decadence. A take-off on Like Water for Chocolate, the spa offered a chocolate bath, including sweet chocolates while soaking; a massage; and a chocolate facial or chocolate scrub.

Little did the Aztecs know that their discovery of the cacao bean centuries ago would delight the world forever and inspire movies, books, and museums to glorify the talents of chocolatiers and pastry chefs.

Indulge yourself guilt-free at L’Affaire Chocolat on March 26. It’s good for you!